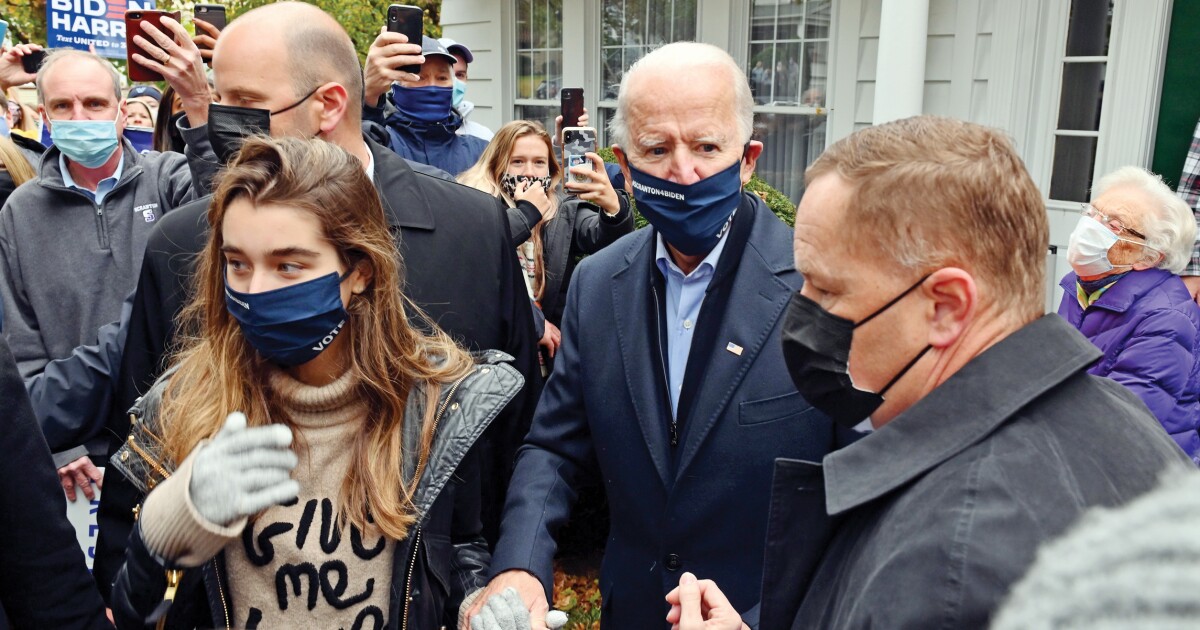 SCRANTON, Pennsylvania — As we spoke in the living room of his modest home just outside Scranton, Ralph Mercuri listed the problems afflicting America: the never-ending plague, deepening political tribalism, the looming prospect of another Trump presidential run.

But what distressed him most was unexpected: his belief that Joe Biden is no longer up to the job of being president. “This physical thing has really shaken me,” Mercuri said, his voice growing unsettled and his face flushing red. “He just looks frail, physically. He scares me right now. And he’s more forgetful now and more rigid in his thinking.”

“He would have been a great president a while ago,” Mercuri concluded, “but not now.”

On a pre-Christmas visit to Biden’s birthplace of Scranton, I found Mercuri’s view to be the rule rather than the exception. Roughly half of the nearly two dozen people I interviewed said they voted for and still support the president. But even among Biden hometown fans, most don’t think he should run for reelection.

Of the 12 Biden supporters I spoke with, just three thought he should run again, while two were taking a wait-and-see approach. Seven, including Mercuri, were adamantly opposed to him running for reelection.

It’s a small sample size, to be sure. But given the central role that Scranton has played in Biden’s persona and political success, it should be cause for alarm inside the White House and Democratic Party.

Scranton sits in the rugged northeast corner of Pennsylvania, or NEPA as locals call it. It was a regional coal and railroad hub in the 19th and early 20th centuries and produced the first electric streetcar system in America, which the city honors in its nickname: Electric City. Scranton’s industrial boom attracted immigrants from Europe, including Ireland, from which Biden’s ancestors emigrated in the mid-19th century.

Joe Biden was born in Scranton in 1942 and lived in the middle-class Green Ridge neighborhood for 10 years before the family departed for Delaware. Biden has returned to Scranton often throughout his life, for commencement speeches, political fundraisers, and funerals of old friends.

And it’s not just about his identity. It’s about policy. Biden framed his 2020 candidacy as a choice between “Scranton and Park Avenue” and launched not one, but two Scranton-themed campaign videos: “Scranton values” and “A kid from Scranton.”

Biden name-dropped Scranton in both presidential debates and at many of his campaign stops. He visited Scranton several times during the campaign, on Election Day and again last October, regaling the crowd for nearly 15 minutes with tales of his youth here.

But those visits haven’t garnered much goodwill, at least not among the residents I spoke with. The main feeling Biden’s connection to Scranton seems to elicit is not pride but indifference.

At the 16th Ward, a restaurant in downtown Scranton, I struck up a conversation with a 39-year-old mechanic. When I mentioned that Biden was from Scranton, he simply said, “So what?” and turned back to the football game playing on the bar TV.

Other reporters who visited Scranton have found a similar apathy toward Biden. A 2019 New York Times story about Biden’s relationship with the city noted, “Just because Mr. Biden can’t stop talking about Scranton doesn’t mean everyone in Scranton is talking about Mr. Biden.” In fact, the reporters wrote, “No one mentioned Mr. Biden” during their three days of interviews.

Another New York Times story from Scranton found that in “more than two dozen interviews the week of Mr. Biden’s visit, few voters were particularly enthusiastic about his candidacy, despite his personal roots.” Some residents “expressed annoyance at what they said was Mr. Biden’s habit of making Scranton into a kind of blue-collar cartoon.”

Scranton’s lack of enthusiasm for Biden is evident in other ways, too — in the public backlash to the City Council’s decision last April to name two local streets after Biden and in the protesters and hecklers who followed the president around Scranton during an October visit to sell his Build Back Better agenda.

Biden is even an afterthought on the official website of Lackawanna County, which contains Scranton. It lists all the famous politicians who hail from or have visited Scranton, but curiously omits the current president.

This is surprising given the warmth with which Biden talks about Scranton, and the frequency.

To be sure, there are plenty of Scrantonites who return the warmth, but even they often think one more run would be one too many. I approached two middle-aged women smoking on a bench outside Viewmont Mall, on the north side of town. I explained who I was and what I was doing.

“Love him,” one of the women, Laurie, said right away of Biden.

A lifelong Democrat and “outspoken Irishwoman,” Laurie likes that Biden doesn’t tweet out everything that comes to his mind, signed a $1 trillion infrastructure bill into law, and stands up for “women’s rights.”

Then I asked Laurie whether she thinks Biden should run for reelection, and before I could even finish my question, she responded with a firm, “No — I don’t. I want to see someone younger in the White House. I do love Joe Biden. I’m from this area. But I don’t want to see him run again. I think he needs to push a younger person up.”

“I know Biden is going to run again,” she said before we parted. “But I really wish he wouldn’t.”

And so it went with most of my interviews.

Predictably, none of the Republicans and Trump supporters I met had a good word to say about the president or thought he should run again. It’s harder to dismiss the assessments of Biden supporters and voters, especially those whose kinship with the president transcends politics.

Such was the case with Martin Monaghan, a former firefighter who spoke with me as he waited for his wife outside Viewmont’s Forever 21. Monaghan told me proudly that he had played baseball against Biden when they were both teenagers.

Monaghan said he and his entire family voted for Biden and still support him. But he, too, is opposed to Biden running again. “No, I think he’s too old,” Monaghan said when I asked him. “He’s the same age as me — he’s 79.”

These anecdotes reflect a larger pattern. According to a December Morning Consult/Politico poll, 58% of voters don’t want Biden to run for reelection. That number included nearly a third of Democrats.

Locals are quick to note that Biden moved away from Scranton when he was 10 and complain that he seems to find his way back only around election time.

When I spoke with Ralph Mercuri, his home health aide, a young woman named Margaret, sat in on our conversation. She was silent throughout most of the interview but spoke up when I mentioned that Biden was from Scranton. “I think he just uses that as a political prop,” she said. “He’s from Delaware, isn’t he?”

At Eden Vegan Cafe in downtown Scranton, I was served by a man named Blake, a Bernie Sanders supporter in his 30s who told me he voted for Biden mainly because he wasn’t Donald Trump.

When I mentioned that Biden was born in Scranton, Blake laughed: “I feel like most people feel like the Scranton connection is something that gets brought out every time it’s convenient,” he said. “He’s more of a Delaware guy than Scranton guy, you know?”

To some, Biden’s presidency displays an alienation from Scranton. At the Marketplace at Steamtown Mall, which is built on an abandoned railroad yard, I met a man in his 30s named John working at a retail kiosk. John voted for Trump in 2016 but couldn’t bring himself to vote for either candidate in 2020.

To John, Biden comes across as “snobby,” someone whose mandates and heavy-handed government are paired with a dismissiveness toward those who don’t immediately jump on board. “It doesn’t bother me he’s from here,” he said. “But some of the stuff he says and the way he says it frowns upon people from here, you know what I mean?”

The image of Biden as a champion of the working class is something of a media construct, but it has served him well. It was an important reason why Barack Obama chose him as his running mate in 2008. And it was the main reason he was perceived as someone who could actually beat Trump in 2020, which rallied much of the party around his nomination.

But Biden lost white voters without a college degree by 26 points in 2020.

Biden performed worse than Hillary Clinton in 2016 and Obama in 2008 and 2012 in counties dominated by blue-collar workers. According to research from the Economic Innovation Group, Biden won only 15 of the 265 counties where the share of adult jobs in construction, the service industry, and other nonprofessional jobs is at least 40%.

Biden did win Lackawanna County, but by 5,000 fewer votes than Obama received in 2008, despite winning the most votes in U.S. history nationally.

The Democrats’ problem is that amid the class realignment going on in American politics, Scranton is the type of place that is moving away from them.

The economic case the party is making — that government will provide people with a better life through more control over the economy, healthcare, housing, the environment, education, and so on — is becoming a harder sell. According to an October 2021 Gallup poll, 52% of people think government is trying to do too many things to solve problems, while 42% said it is not doing enough.

More importantly, as Democrats continue to lurch leftward on cultural issues, they’re alienating the socially moderate and conservative voters who predominate in Scranton and places like it.

When I visited Scranton, Biden’s $2 trillion Build Back Better agenda was being debated in Washington. But the legislation didn’t come up in any of my conversations. Instead, most locals complained about vaccine mandates and spending-induced inflation, as well as cultural issues such as illegal immigration, rising crime rates, and what’s being taught in public schools.

Since his presidency began, Biden’s approval rating has sunk significantly on just about every issue and among every group of voters. Perhaps most revealingly, a recent Economist/YouGov poll found that just 12% of white men without a college degree and 15% of white women without a college degree believe Biden cares “a lot” about their needs and problems, the lowest among any demographic in the survey.

Daniel Allott is an opinion editor at the Hill and author of On the Road in Trump’s America: A Journey Into the Heart of a Divided Nation.