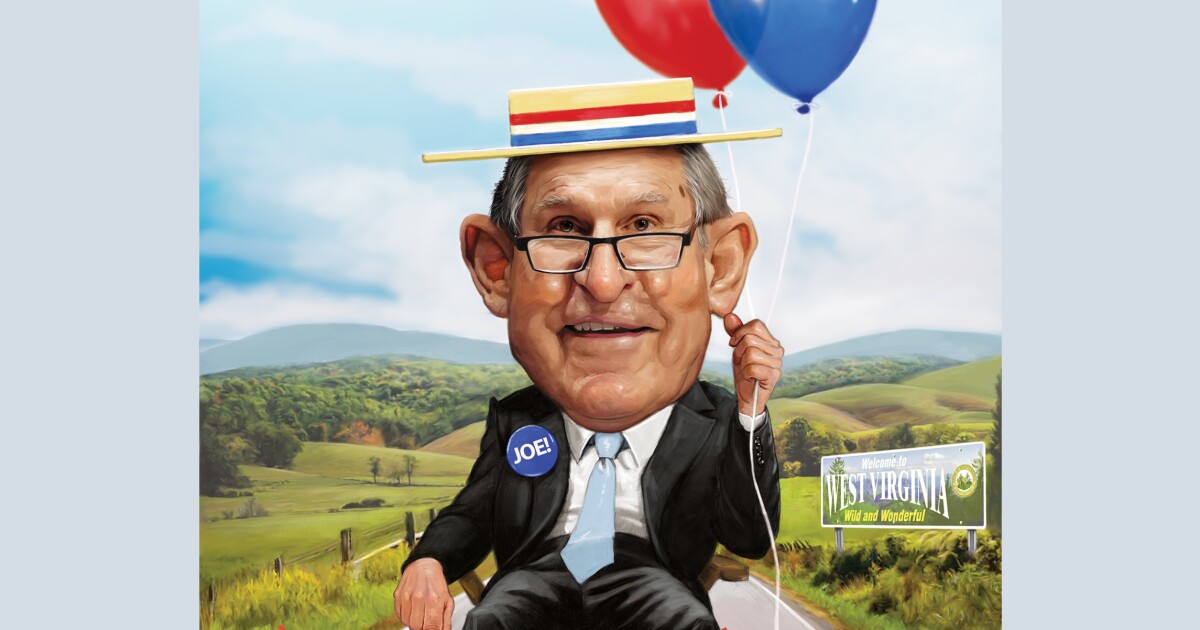 The last time that Joe Manchin was facing real pressure, not the sound and fury of progressives tweeting angrily and futilely at him, the one remaining national Democratic officeholder from West Virginia was blunt:

“Washington Democrats are making it more difficult for me to be a West Virginia Democrat.”

And that was over three years ago. Since then, West Virginia’s senior senator has gone from one of the only Democrats who would work with President Donald Trump to one of the only Democrats who will stymie President Joe Biden’s eagerness to placate congressional liberals by rubber-stamping their expensive agenda. Of course, Manchin has voted with Biden 100% of the time thus far. But that’s because of his disproportionate influence on what comes up for a vote at all.

Joe Manchin isn’t the most powerful man in Washington, but he finds himself in the middle of the political and media maelstroms and is quickly becoming the go-to Man to Blame when someone doesn’t get his or her way. He is also the center of attention, his houseboat — named “Almost Heaven,” after the old John Denver anthem of his beloved West Virginia — becoming the meeting place of top senators and other political figures from both sides of the aisle who are trying to solve Washington’s problems by stepping away from the glare of the D.C. lights.

Just how did Joseph Manchin III of West Virginia end up here? The answer is far less exciting than it sounds, but it is this: Joe Manchin has a process.

The appeal to “process” is a theme with Manchin, in everything from political philosophy to his stance on the filibuster to voting on appointees by presidents of the opposing party. There’s no denying that the process has served him well: As West Virginia went from blue to deep red, Manchin remained a Democrat and increased his political fortunes. The senator essentially had to run up the down escalator to stay ahead of the shifting political landscape, and he made it to the top.

The 2020 census that delivered the long-expected death blow to West Virginia’s 3rd Congressional District revealed the extent of the state’s population hemorrhaging. West Virginia’s population peaked in the 1950s and, other than during a brief blip in the 1970s, has been on a declining glide path ever since. From 2010 to 2020, West Virginia had the highest percentage of population loss of any state in America. “This is a problem, a real problem,” current West Virginia Gov. Jim Justice said in response to the census data. “We have a lot of elderly people in West Virginia. If we don’t replace and we don’t find a way to start growing, this situation will get worse. By less and less people, that means less and less revenue.”

All that decline in revenue and people also meant a changing political landscape for politicians who need the votes of the latter and the promise of the former to thrive. For a state that had been cobalt blue for nearly a century outside of the occasional Republican governor, the shift came gradually, then suddenly. Most political observers were shocked when Al Gore lost the state to George W. Bush in the 2000 election when the state’s usually paltry five electoral votes would’ve made Gore president had he triumphed in West Virginia. It was the start of a trend. Having voted against George H.W. Bush twice, West Virginia voted for George W. again in 2004, and a Democratic presidential candidate hasn’t been competitive in the state since.

This coincided with the start of another trend: that of Joe Manchin performing well against the tides of electoral change. While Bush shocked by winning West Virginia in 2000, Manchin bounced back from his 1996 losing bid for governor by winning his election for secretary of state, the office once held by his flamboyant and controversial uncle, A. James Manchin. While John Kerry was busy losing the state to George W. Bush in 2004 by double digits, Joe Manchin took advantage of then-Gov. Bob Wise’s affair scandal to secure the governorship with a healthy 30-point general election win.

The state’s shift away from any Democrat not named Joe Manchin was on. Shelley Moore Capito became the first Republican to win a seat in the U.S. House of Representatives from West Virginia in 17 years during the 2000 cycle, and won reelection each term until 2014, when she ran for, and won, the open U.S. Senate seat of the retiring Jay Rockefeller. Donald Trump’s eye-popping 42-point win in West Virginia, a state Hillary Clinton’s husband had won comfortably 20 years prior, capped off the reddening. With now-Sen. Capito as the other half of West Virginia’s delegation, and all three congressional districts securely in the Republican column, Joe Manchin found himself the lone Democratic Party member of the state’s elected national offices.

Manchin went into the 2016 election with a two-part plan. First, recruit longtime friend and richest man in West Virginia Jim Justice to run for governor. Second, campaign well enough for Hillary Clinton to warrant the ear of the widely presumed next president going forward.

Lifelong Republican Jim Justice switched parties and won the governorship as a Democrat but used President Trump’s first visit to the state to switch publicly back to Team Red, igniting a personal feud with Manchin so bitter that many thought Joe might run for governor again to settle the grudge. Manchin, who makes no secret of his dislike of Washington, decided to remain in the Senate. Justice won a relatively comfortable reelection in 2020.

Trump’s smashing victory washed away the second part of the plan. At a Democratic debate, Clinton said: “We’re going to put a lot of coal miners and coal companies out of business.” Though she promised economic help to those put out of work, the first part of that quote could not be ameliorated by the second. According to his version, Manchin called Bill Clinton to pull his endorsement, only to be begged not to. He relented when Hillary personally pitched him a tour of coal country to try and explain her comments, along with a promise to steer funding West Virginia’s way once elected. To her credit, Clinton followed through and took the slings and arrows of the aggrieved mountain folk in person, and Manchin followed through on campaigning for her. While the public, in-person apology was mostly respected, it made an unlikely electoral chore by her own admission impossible, resulting in Donald Trump’s largest margin of victory in any state in 2016.

While facing criticism for that endorsement a year later during his own reelection campaign, Manchin allowed that “it was a mistake. It was a mistake politically.”

When Justice switched parties and left Manchin as the lone statewide Democrat, both the Left and the Right tried to take advantage of his perceived vulnerability.

The Left went first. Attempting to use Sen. Bernie Sanders's strong showing in the West Virginia primary as leverage, some progressive activists tried to get some concessions out of Manchin on a conference call. An openly frustrated Manchin declared: “What you ought to do is vote me out. Vote me out! I’m not changing. Find somebody else who can beat me and vote me out.” He then proceeded to call the activists out as Bernie Sanders supporters, declared his colleague “not even a Democrat,” and set off a personal feud between those supporters and himself that continues to this day.

The folks then known as Brand New Congress, some of whom went on to be part of the progressive Justice Democrats, took Joe up on his offer and ran Paula Jean Swearengin against him in the 2018 Democratic primary. As the same Knock Down the House camera crew that documented Alexandria Ocasio-Cortez’s upset win and rise to stardom in New York followed Swearengin around on the campaign trail, Manchin remained confident. “Everybody knows who I am. The state knows me, I’m branded pretty well, but I would never, ever discourage anybody from running. … The process is the process, it’s a wonderful process, and everybody can jump in.” Which is true, anyone can jump in; but since nobody other than Charlotte Pritt in 1996 has beaten Joe Manchin in a West Virginia election of any kind, everyone else’s process ends in a loss. Swearengin’s loss in the 2018 primary was by 40 points. The Left stubbornly ran the same play again in 2020. In the newly deep-red West Virginia, Swearengin one-upped her 2018 feat, losing by 43 points to Republican Sen. Capito in the 2020 general election. Her 27% of the vote was the lowest for a Democratic U.S. Senate candidate in West Virginia history.

Republicans also sensed an opening. While Manchin won an easy primary, he would face a tough general election against sitting West Virginia Attorney General Patrick Morrisey. Even as President Trump campaigned frequently in the state, Manchin would thread the needle of not attacking the president directly while also talking just enough smack to appear independent. “Mr. President, here’s the thing: What we find out is people like you and like me in my state. They know me. In a state that you’re extremely popular in … you won’t have success. … Because I am going to win, [and] it’s not going to look good on you.”

Win he did. Manchin told everyone who would listen that 2018 would be his last campaign. Whether you believe that or not, he certainly acts as though he has no future election to win. His preferred interview go-to cliches and catchphrases are all about the process, about getting things done, about what’s best for West Virginia and the nation, in that order. Since his only electoral setback in 1996, Joe Manchin has kept atop the shifting political sands to place him at the center by design. He has been prepared for every political trial since then.

Trump’s impeachment wasn’t Manchin’s first. His own uncle A. James Manchin stood accused of mismanaging the state’s investment funds as secretary of state. He resigned after the House of Delegates voted to impeach him, rather than face an impeachment trial by the West Virginia state Senate that included a young Joe Manchin. The defiant A. James Manchin would return to the West Virginia House of Delegates in 1998 until his death in 2003, a period that saw his nephew Joe Manchin elected to the secretary of state post he had resigned from over a decade earlier.

At 74 years of age and leaning toward retirement, Joe Manchin isn’t going to change parties or political strategy. The process isn’t going anywhere. “Yes, this process can be frustrating and slow,” he wrote in an op-ed about the Senate and his opposition to killing the filibuster. “It will force compromises that are not always ideal. But consider the alternative. Do we really want to live in an America where one party can dictate and demand everything and anything it wants, whenever it wants?”

The question is rhetorical. Many of Manchin’s critics would answer “yes” enthusiastically, and he knows that. But that’s not what Joe Manchin wants, primarily because he doesn’t believe it’ll be good for West Virginia.

“Whoever is president, my first priority is the same — as always. I look for what’s best for West Virginia and the nation as a whole,” Manchin said in 2012. It was true then, and it’s still true now. Washington might be making it harder for Joe Manchin to be a West Virginia Democrat, but he’s the last of his kind because that’s never stopped him before. For Joe Manchin, it is all just part of the process.

Andrew Donaldson (@four4thefire ) is a writer and commentator who splits his time between his native West Virginia and North Carolina.