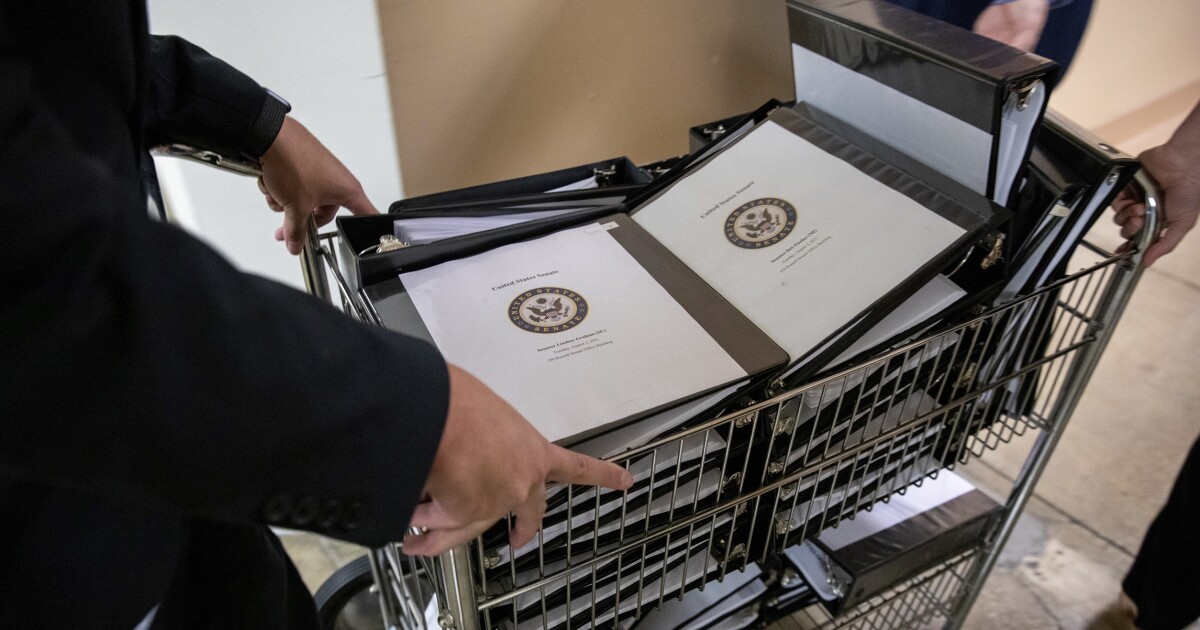 The Senate infrastructure bill spends too much money, adding too much debt, for too many unnecessary projects while using too many budgetary gimmicks to claim it is “paid for” when it is not.

All of that is before considering that Democratic leaders want to treat it as a package deal with an even more bloated and irresponsible social spending bill.

For all those reasons, reasonable senators should filibuster the infrastructure bill to death.

The $1 trillion bill includes some $550 billion in new spending. Only $110 billion is earmarked for traditional roads and bridges. According to the conservative interest group Heritage Action, nearly $40 billion would go to bureaucracy-riven public transit authorities, which seems outlandishly wasteful considering that pandemic relief bills already sent $67 billion their way.

The bill also is full of hidden time bombs, such as a “pilot program” for a vehicle per-mile user fee, which would (according to the conservative Americans for Tax Reform) “lay the groundwork for what would end up being an incredibly regressive, costly tax from the American public.” It also contains objectionable priorities of the “woke” Left, including ameliorating the “racism physically built into some of our highways” (huh?) and imposing rules on broadband expansion aimed at protecting those of a nonstandard “gender identity.” These provisions will be open invitations for federal bureaucrats to act as the commissars of identity politics.

Moreover, as with other bills pushed by the Democratic leadership, the true cost of the package is greater than they claim. The centrist Committee for a Responsible Federal Budget notes that the bill not only adds one-time projects, but “appears to significantly increase [recurring] baseline spending for highway and transit programs in the second half of the decade.” The real decadelong cost, therefore, will be around $70 billion higher.

Worse, Speaker Nancy Pelosi has repeatedly said she won’t advance this bill unless the Senate already has proved it will pass a separate $3.5 trillion social spending package (which the CRFB says uses gimmicks to hide another $1.75 trillion!). That is the very definition of legislative lard combined with numerous left-wing policy changes.

None of this is affordable. The national debt is already approaching 130% of gross domestic product — when anything above 100% is economically problematic. Both of these packages will add substantially to that debt.

Therein, by the way, lies a major problem. Those who crafted the infrastructure bill made a big deal of claiming that it “pays for itself” without new taxes or additional debt. This is balderdash. In several ways, they use the “savings” equivalent of the spending gimmick described above by using 10 years’ worth of various savings to offset only five years of spending. The next five years of spending aren’t counted as adding to the debt, but aren’t offset by other savings.

It also uses one-time solutions such as sales from the Strategic Petroleum Reserve and sales of the broadband spectrum to “pay for” the bill. The former is a bad policy choice at a time when the reserve already is 106 million barrels (about 14%) below its 727-million-barrel authorized capacity, leaving the nation less prepared for any true energy crisis. The latter includes $65 billion from spectrum sales that already have occurred — thus claiming as a new “pay for” something that was in the bank five months ago.

The list of sleights-of-hand goes on and on. Overall, the respected CRFB says only $200 billion of the $550 billion in new infrastructure spending is offset by real savings rather than gimmicks.

This infrastructure package is a raw deal for taxpayers. Responsible senators should say “no deal” and move on.