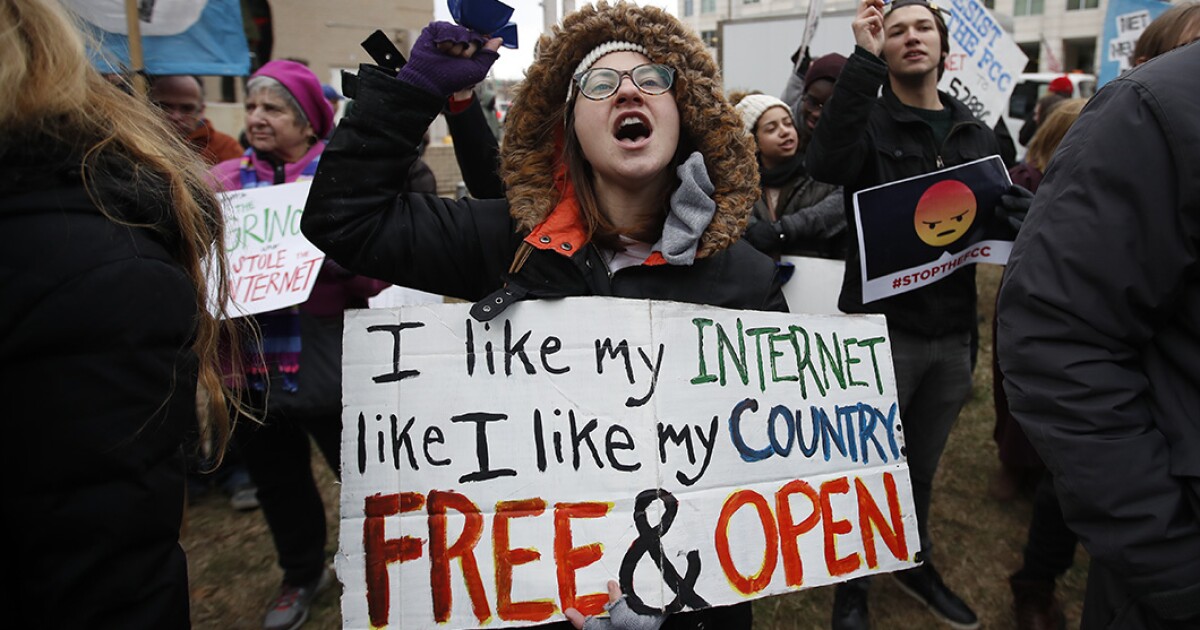 Net neutrality rules to regulate internet companies could return, thanks to Democrats taking back the majority at the Federal Communications Commission, a Republican at the commission said.

“There are a significant number of Democrats who have made clear and public their goal is to regulate internet companies like a utility,” said Brendan Carr, a Republican commissioner. He said it seemed likely that Democrats at the commission will push for reinstating stronger regulations for internet companies.

Net neutrality is the principle that internet service providers should treat all data on the internet the same and not discriminate or charge differently based on where it’s coming from or who it’s going to.

Under Chairman Ajit Pai’s leadership in 2017, the FCC voted down net neutrality rules, which previously placed more regulations on internet providers and prevented them from providing slower traffic to particular sites.

“The proof is in the pudding on net neutrality. We can’t go back. Turning back to the Obama-era heavy regulatory approach would be a real mistake,” Carr told the Washington Examiner.

Carr and Republicans oppose net neutrality rules, saying that they constitute heavy-handed, utility-style regulation of internet providers that would decrease investment in the industry and would be too burdensome for smaller internet companies, thereby restricting choice and competition.

Carr, who was picked by President Trump to serve as an FCC commissioner in 2017, said that since net neutrality was repealed by Pai in 2017, internet speeds have gotten faster, prices have decreased, and networks have grown and expanded to new parts of the country. Furthermore, U.S. internet service providers have successfully handled a “massive increase” in internet demand in the past few months during the pandemic, Carr said, unlike many countries in Europe.

Democrats want to reinstate the regulations by using Title II of the 1930s era Communications Act. They say the regulations are necessary because, in certain instances, internet providers have throttled speeds for users, installed data caps, and have the ability to charge users more to have faster access to certain websites.

Pai has said on numerous occasions that although he rejects the FCC's authority to use the Title II powers in the name of net neutrality, he supports the principles of net neutrality, which are that internet providers operate in an open and fair manner.

Instead, Pai, Carr, and most Republicans are in favor of a light-touch regulatory approach that encourages internet providers to invest in and build out their networks. This is particularly important in order to close the “digital divide” between internet access in urban areas versus rural areas, Carr said.

Furthermore, Republicans are in favor of Congress spelling out net neutrality rules rather than relying on the Title II regulations, which they say are outdated.

Carr said that “Americans should be very skeptical” about going back to the old net neutrality rules of Title II regulations that, he says, will not have the intended effects that Democrats want them to have.

“Title II and neutrality is a head fake, many on the Left pitch it as sort of mythical sword that will solve all their supposed issues while ignoring the real problems,” said Carr.

He said that even during the Obama administration, when the Title II protections existed, internet service providers could place data caps on users, and internet speeds could also be throttled, but disclosure of such activities was required, as they are today.

Besides harmful net neutrality regulations returning under the Democrats' majority at the FCC, Carr said, the commission could lessen its focus on holding Chinese telecommunications companies accountable and end the push for reforming the Section 230 tech censorship protection law.

Carr said that one of the key parts of Pai’s legacy is that he forced the commission to confront China by banning Chinese telecommunication giants such as Huawei and ZTE as “national security threats” due to their ties to the Chinese Communist Party.

“Any softening to that resolve on the China threat would be a monumental mistake,” said Carr.