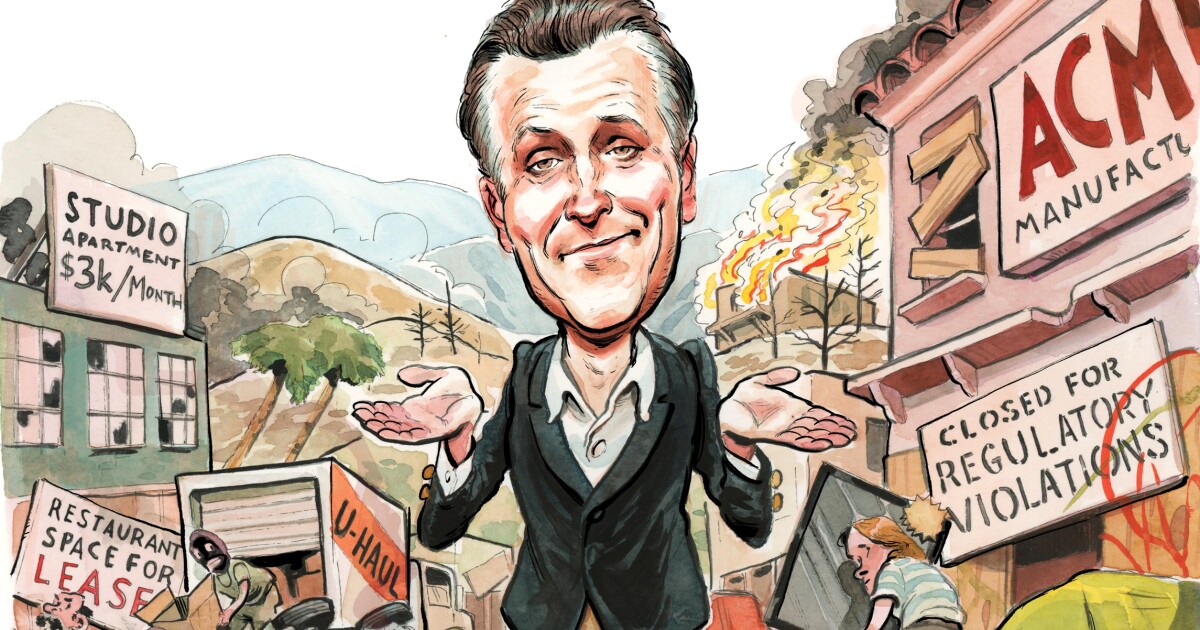 Even California has its limits. And they just might bring down the curtain on the charmed career of Golden State golden boy Gavin Newsom.

In less than a year, the liberal governor of California went from having a 67% approval rating, including a majority of the state’s Republicans, to potentially becoming the third governor in the nation’s history to lose his seat in a recall election. California may have a Cook partisan voter index of D+12, the sitting vice president and speaker of the House, and nearly 20% of the Democratic Party’s House contingent, but Newsom’s scandal-plagued term might prove too much to ignore.

A group of grassroots organizers has already garnered 1.5 million signatures on a petition to force a recall vote against Newsom, but they intend to send 2 million to the state by the March deadline just in case some are thrown out. Although the organizers largely come from conservative backgrounds and the first major candidate to jump into the race is Kevin Faulconer, the former Republican mayor of San Diego, the anti-Newsom push isn’t strictly partisan.

“If we get back to normal, everyone’s gonna have to go to therapy for a few f—ing years, because we’re all depressed and going insane,” a prominent Latino Democratic strategist who’s worked with scores of state politicians told the Washington Examiner. In the hopes of controlling the narrative, Newsom has traversed the state under the guise of coronavirus management, hamming it up for the camera in convenient photo-ops with close party allies as a show of confidence in his stature.

But that’s part of the problem. “I don’t want to see my governor happy every day,” the Democratic strategist noted. “I want to see my governor a little bit miserable. Just like me. I don’t want to know that my governor is sending his kids to in-person classes every day.” Newsom’s troubles really started to boil over when he was caught dining at the Michelin-starred French Laundry with 22 others while shuttering local restaurants left and right over coronavirus restrictions.

Although California has suffered a death rate just half as bad as New York and New Jersey, Newsom has committed the sort of made-for-TV errors that only compound his reputation as an out-of-touch ingénue. Newsom has let the teachers unions keep all but 11% of the state’s children out of school, yet he sent his own to in-person private school. And after nearly a year of Californians sacrificing their livelihoods to keep their death rates much lower than most of the nation, it aggregated half of its total deaths from the pandemic in just two months — after Newsom instituted a ban on outdoor dining, putting an already struggling restaurant industry on life support.

Oliver Wynn has been working in Los Angeles’s restaurant industry for half his life, starting as a dishwasher at 14 and spending the next 14 years climbing the industry’s competitive hierarchy. After landing a highly coveted role as an assistant office manager and bartender at the ultra-exclusive penthouse of Mastro’s Steakhouse in Beverly Hills, Wynn was forced to file for unemployment thanks to Newsom’s restaurant shutdown orders.

“I never wanted to file for unemployment in my life,” Wynn told me. But it was inevitable. With the state reopening indoor dining to 25% and 50% of capacity, only to then shut it down all over again, scoring shifts at Mastro’s became “cutthroat,” as he described it.

“Seeing other states, and how they just stayed open or shut down early and got on with it and decided one way or another — my biggest issue with Newsom is him just going back and forth,” said Wynn. With Mastro’s unable to predict whether it would be allowed to serve indoors from one week to the next, he couldn’t guarantee shifts to his workers. Wynn describes himself as “not at all political,” and he will support the Newsom recall.

“I think I was the first one to even bring it up at work,” said Wynn. “I feel like Day One I knew this is not the right process at all. Whether it’s Republican or Democratic, it’s beyond that.”

Faulconer understands this. In 2016, when the city of San Diego voted for Hillary Clinton by a margin of 37 points, the Republican incumbent beat his Democratic mayoral challenger by nearly 38 points. In internal polling, Faulconer found that a strong plurality of voters would vote to recall Newsom, and in a theoretical replacement election featuring Faulconer facing off against former Los Angeles Mayor Antonio Villaraigosa, Faulconer would actually win. But throw in former President Donald Trump’s acting DNI Ric Grenell and perennial Republican candidate John Cox, and the Democratic mayor wins.

“If the race is nationalized, it actually makes it harder for the recall to pass,” Faulconer campaign manager Stephen Puetz said of their polling. Although both Grenell's and Cox’s close ties to Trump could boost turnout among his base, the recall could risk becoming a referendum against Trump, not Newsom. And ironically enough, that wouldn’t be the first time Cox saved Newsom’s political fortunes.

“I think the most interesting takeaway from the 2018 race is that Gavin Newsom and the Democrat machine actually picked their opponent, and they picked John Cox,” Puetz said of Newsom’s bogus attack ad campaign against him. Because of California’s jungle primary system, Newsom could have faced Villaraigosa in the 2018 general election, but by succeeding in platforming Cox, who then scored Trump’s endorsement, he faced a Republican instead of a well-known Latino mayor, a godsend for a normal general election.

But Newsom’s fortunes, perhaps for the first time, may have finally fallen.

Newsom’s entire career has been characterized by an air of inevitability. From just two years after graduating college, Newsom benefited from the patronage of billionaire Gordon Getty, a family friend and one-time employer of Newsom’s father. After bankrolling the younger Newsom’s boutique winery, the Getty family backed Newsom as he forayed into politics. After hosting a fundraiser for then-mayoral hopeful Willie Brown at his Getty-funded venture, Newsom was appointed to the Parking and Traffic Commission and then the San Francisco Board of Supervisors by the San Francisco kingmaker. Brown served his maximum two terms as mayor and then endorsed Newsom to succeed him. Newsom served his own two terms as mayor only to launch a gubernatorial bid backed by Bill Clinton.

In a rare stumble for Newsom, his polling never caught up to eventual victor Jerry Brown. No matter: Newsom pivoted to a successful play to become the state’s lieutenant governor. By the end of that gig, California faced two impending top vacancies: Barbara Boxer’s Senate seat and Brown’s gubernatorial seat. When state Attorney General Kamala Harris set her sights on the former, it was game over. Newsom went on to win the general gubernatorial election by more than 23 points.

But Newsom has been dogged by missteps of his own making. Thanks to his own actions as lieutenant governor, California put the nail in the coffin of the nuclear power that could have offset the state-orchestrated rolling blackouts required to maintain a power grid the state government refuses to fix. Newsom started the push to close Diablo Canyon, the last nuclear power plant in California, by initiating an environmental impact review and making it clear to the state’s energy companies which way he wanted it to go. As governor, he has continued following the path to closure. Suddenly, the summer’s rolling blackouts appeared to be not conservation but damaging and dangerous ideological folly.

The consequences of Newsom’s already inane indoor dining ban were exacerbated by his refusal to ease the residential zoning requirements in the state in order to spur more sorely needed housing development. This failure forced socially starved Californians to pack into too-cramped, multigenerational homes — dangerous for virus transmission in addition to the misery of the housing shortage-induced sardining of the population.

Then there was the disaster of California’s Assembly Bill 5, which, as Recall Newsom senior adviser Randy Economy aptly put it, “unionized a labor force that didn’t want to be unionized.” The bill, which forced employers to treat independent contractors, such as Uber drivers or freelance journalists, as formal employees, thus pricing many workers out of the economy, got caught up in presidential politics: During the Democratic presidential primary, Elizabeth Warren issued a full-throated endorsement of the then-little-known bill, aimed in part at Uber, where Harris’s brother-in-law and niece worked at the time. Soon, the field roundly endorsed it, Harris included.

“If you’re the California Legislature in the state Senate or the Assembly, and you have national reporters [covering AB 5], there’s a national steamroll effect,” the Democratic strategist, a former staffer for (recalled) Gov. Gray Davis, said. “Everyone got steamrolled, including Gavin Newsom. If they were to reject it, then they were rejecting their party’s standard-bearer for president, whoever he or she was going to be. Then, you add upon the fact that, you know, California’s current U.S. senator endorsed it, and her family works for Uber.”

By now, AB 5 is a shell of its former self, not just thanks to the state government agreeing to a select number of exceptions amending the bill, but also because voters overwhelmingly passed Prop 22, which mostly overrode AB 5 as it pertained to the hundreds of thousands of workers dependent on app-based industries like Uber.

Even so, the state has bled so much of its population, it’s set to lose a congressional seat.

So, could the recall actually pass? Newsom’s career has survived him dating a 19-year-old when he was mayor and 20 years her senior, and cheating on his ex-wife — ironically enough, Kimberly Guilfoyle, the current paramour of Donald Trump Jr. — with his best friend’s wife.

“Villaraigosa and Gavin both had similar extramarital affairs,” the Democratic strategist said. “Gavin broke the bro code: Not only did he cheat on his wife, he cheated on his wife with his best friend’s wife, which is like a double sin. But, you know, if you wink at the camera, and you’ve got pearly white teeth, you can do anything in America.”

Or so Newsom clearly thought.

His former high approval ratings “are a mirror of what Gray Davis had when he got into office as well,” Economy said of Davis, the only previous California governor to be successfully recalled. “And there are many, many similarities with his governance.”

Davis, too, suffered an energy crisis, a fraud scandal, and an economy on tenterhooks. Throw in a pandemic and the perception of Newsom as Nero fine-dining while California burns, and it becomes easier to understand why his days of failing upward could be over.

Tiana Lowe is a commentary writer for the Washington Examiner , as well as an on-air contributor for The First on Pluto TV.