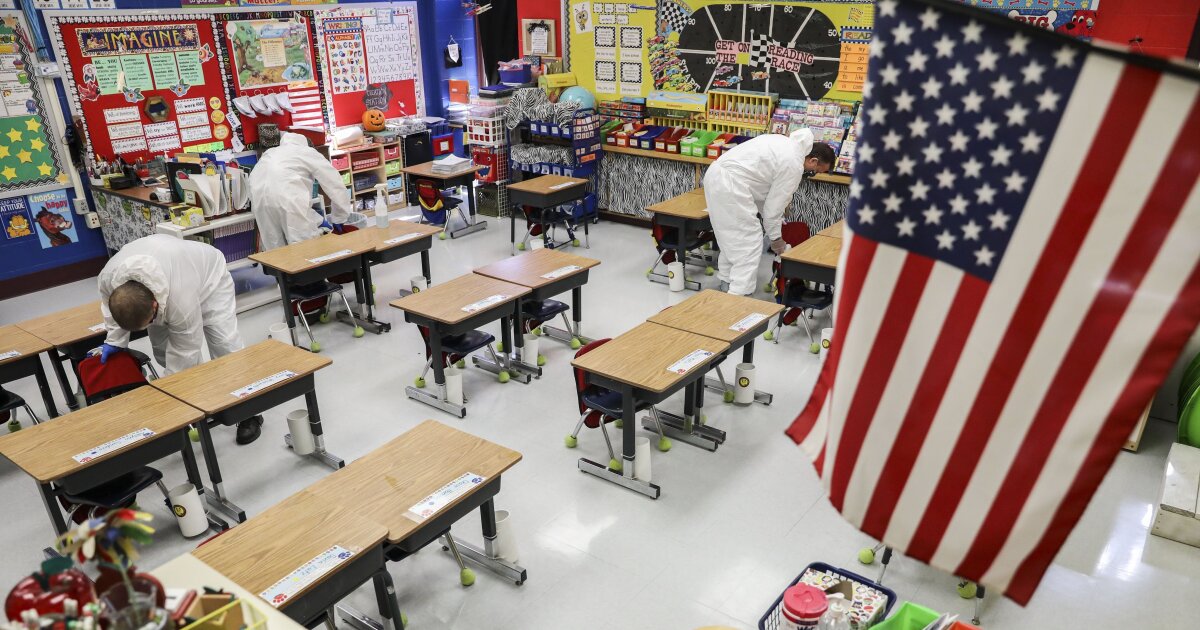 While more school districts face a return to completely virtual classrooms as the latest coronavirus surge sweeps the nation, systems are increasingly reporting that online learning doesn't cut it, with rates of failure soaring across the country.

In Fairfax County, Virginia, a new report from the Office of Research and Strategic Improvement found that the percentage of failing grades so far were up more than 80% compared to last year's rates — jumping 6% to 11%.

In the Los Angeles Unified School District, Ds and Fs among middle and high school students have surged — as school attendance fell. LA schools did not report the year-on-year differences, but districts in the Bay Area reported 50% jumps in failing grades compared to relative stability over the past few years.

In Austin, Texas, nearly one-quarter of all middle school students in the Austin Independent School District were failing at least one class, a 70% increase compared to last year. In the Van Alstyne ISD, 62% of all students participating in virtual learning were failing at least one class. In neighboring Pottsboro ISD, virtual learners were more than five times as likely to have a failing grade than students who attended in-person classes.

The detriments of virtual learning were not indiscriminate — they were felt harder in underserved communities. Lower-income households without the means to provide additional extracurricular support, students with disabilities, and students whose first language is not English all fell into a widening education gap that was largely predicted by educational researchers.

In January 2019, a full year before most of the world knew what coronavirus was, a report from George Mason University found that “fully online coursework has contributed to increasing gaps in educational success across socioeconomic groups while failing to improve affordability.”

“Students with weak academic preparation and those from low-income and under-represented backgrounds consistently underperform in fully-online environments,” the report reads. “A strong body of evidence, as well as industry best practices, have consistently emphasized the critical role of frequent and meaningful interaction between students and instructors for increasing the quality of the online educational experience and improving student outcomes and satisfaction.”

In Fairfax County, “the pattern was pervasive across all student groups, grade levels, and content areas,” but underserved communities were still hit harder — rates of failure among students with disabilities and students who spoke English as a second language were up more than 100%, roughly 20 percentage points higher than the statistical average.

Fairfax County Public Schools Superintendent Scott Brabrand said the school system was “working on identifying by name and by need and are working on specific interventions to support them right now,” according to the Washington Post.

With the current surge in cases, those trends seem unlikely to change in the immediate future. New York City, home to the largest school district in the country, once again shut down classrooms after barely eight weeks of in-person instruction. Districts in Maryland, particularly those comprising the Washington suburbs, are gradually doing the same thing. Anne Arundel County closed all in-person classes for small groups, delayed expanding class reopening, and suspended all athletics. Baltimore City officials announced that they were also revisiting the city school system's reopening plan.

The Economic Policy Institute emphasized that pandemic-induced remote instruction has exacerbated both “well-documented opportunity gaps that put low-income students at a disadvantage relative to their better-off peers” and “the limitations of standardized tests, which reward a narrow set of skills and more affluent students who have access to specialized instruction.”

EPI recommended a three-pronged plan for addressing the effects of COVID-19 on the U.S. educational system. The plan is composed of providing “urgent resources” to scale up remote learning, additional funds to “make up lost ground” when full in-person classes resume and rebuilding the educational system to focus on “nurturing the whole child … ensuring that all children have access to the conditions and resources that enhance learning and development.”