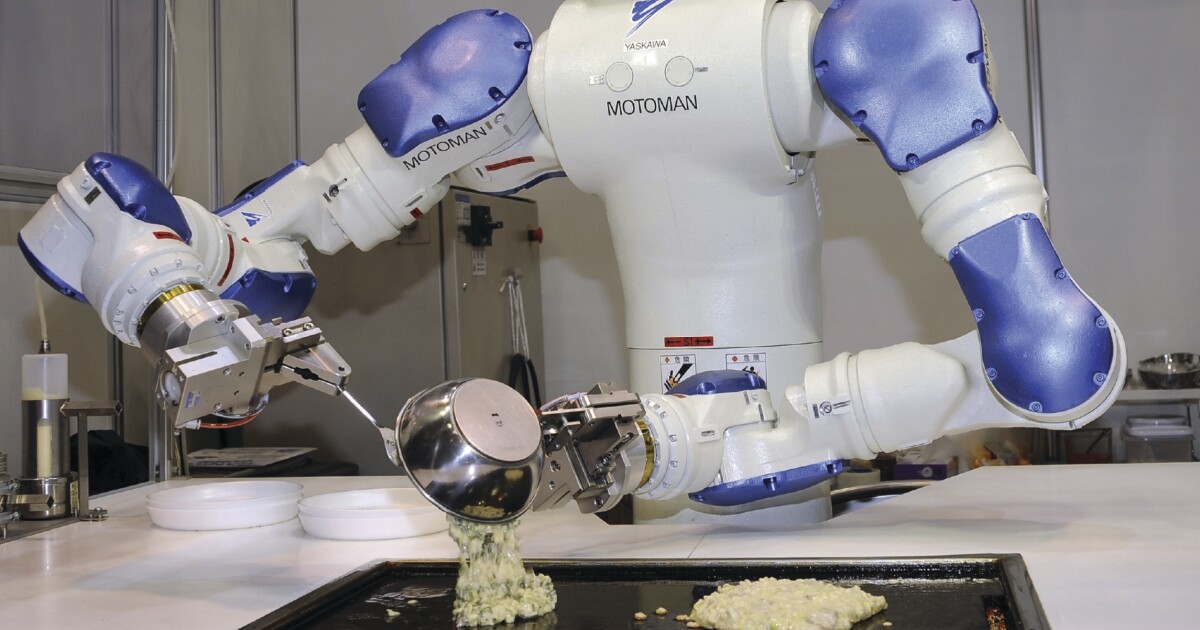 Restaurant owners seeking to avoid profit losses caused by the pandemic are looking at robots to lower their costs.

“That is a huge factor from the standpoint of businesses wanting to reduce cost of operations,” said Brendan Englot, associate professor at the Stevens Institute of Technology and a member of the Robotics and Automation Society.

“The pandemic is an opportunity for them to further explore that technology,” he added.

Dina Marie Zemke, an associate professor at Ball State University and the author of the study “How to Build a Better Robot for Quick Service Restaurants,” said she sees an increase in robotics in restaurant kitchens, especially those in the fast-food sector, because purchasing robots can be cheaper than hiring workers.

According to Zemke’s math, the price to purchase a hamburger-cooking robot is about $60,000. However, many industrial service robots, such as robotic arms that flip meat on a grill, are leased. Such robots cost between $7,000 and $15,000 to purchase, but they are often leased at $4 to $6 per hour of operating time, which is less than the federal minimum wage of $7.25. Also, the manufacturer or distributor is responsible for all maintenance on the device.

“It makes [using robots] economically attractive,” she said. Her study also found that an increase in the minimum wage would prompt greater use of robots by restaurateurs.

“The price is plummeting through the floor,” he said.

Zemke noted that the majority of robots used in restaurants are technologies initially developed for other industries, such as automobile and food manufacturing. They have been modified from their original functions to perform their tasks in a restaurant kitchen setting.

“These robots are from manufacturing lines, so the technology is proven, but it needs to be adapted,” she said.

One robot that has made this transition is Flippy, developed by Miso Robotics, which is a robotic arm capable of flipping burgers while also manning the deep fryer.

Last July, White Castle began a pilot program to test Flippy in its kitchen. The move helped the company better comply with social distancing rules during the coronavirus because fewer workers were needed in the kitchen. It also reduced human contact with food during the cooking process.

Flippy is armed with a slew of intelligence software. It has detectors to know when the food has been cooked to perfection. It can also communicate with delivery drivers to time the food’s preparation so it is ready at the exact time that the driver arrives at the restaurant.

Lisa Ingram, the fourth-generation family leader and CEO of White Castle, said that COVID-19 has prompted restaurants to look at different ways to conduct business.

“The time has never been more perfect to envision what the next century of White Castle and the restaurant industry looks like,” she said when introducing Flippy.

Jordan said the pandemic has prompted other fast-food outlets to consider using Flippy in their kitchens.

“Any major restaurant that you can name, we are talking to,” he said. “We don’t think [robotics] is a choice. We think it’s a requirement, and once the pandemic hit, everyone got super focused on this.”

Having a robot in the kitchen can also be a draw for enticing people into visiting a restaurant, but the attraction is short-lived, Zemke said.

“They will be willing to go to a restaurant once, just to see what [the robot] looks like. … But if the food and the service aren’t good, the robot is interesting, but they probably won’t go back,” she said. “Unless someone has an insanely unique angle on this, robots are really more a utilitarian thing.”

Zemke also noted that as robots become more common in fast-food restaurants, the number of workers needed will be fewer, and those who are hired will require a different skill set that has yet to be defined.

“Having the right employee with the right skill set and the right training at the right rate of pay, I don’t think anyone has got that formula dialed in,” she said, adding that working at a fast-food restaurant may no longer be an entry-level job.

“Where will teens get their first job?” she asked. “There’s a lot of concern about this.”

Englot cautioned that the loss of entry-level jobs could provoke a resistance to using robots in the United States.

“I think you can make the argument that we don’t want to displace these people who are working in these jobs,” he said.

Zemke’s study found that respondents have major concerns regarding the societal impact of robotics entering the workforce, but they don’t see that worry stopping a progression toward automation.

White Castle vowed not to let any worker go because of Flippy. Its workers have kept busy in the front of stores by making sure the locations are clean for diners and by preparing food delivery orders.

Robots would have a hard time tackling chores at the front of the restaurant when compared to the responsibilities in the kitchen, according to Zemke. Robotic software currently has difficulty distinguishing between ambient sound and a direct order from customers.

“Listening would be hard to hear you over background noise,” she said.

Robots could be useful in the front of restaurants by busing tables and serving food. Restaurants in Japan and Korea already have robots manning these jobs.