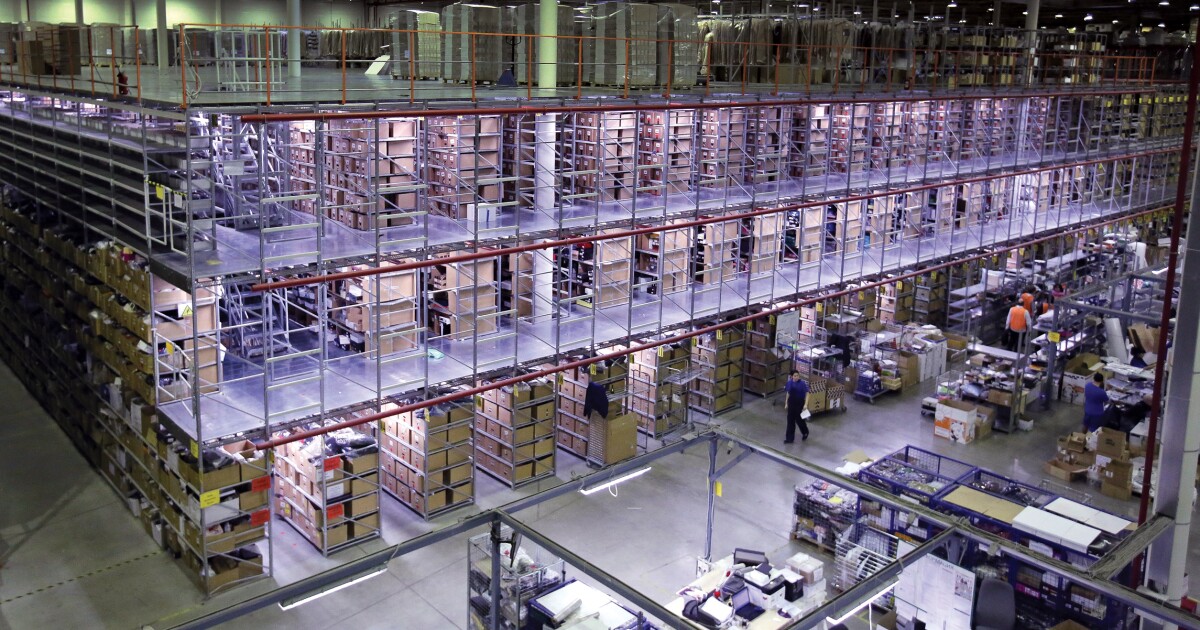 With the holiday shopping season looming, major U.S. retailers are facing a problem few could have predicted at this time last year, but that now threatens to send them into the red.

Several companies are grappling with excess inventory as inflation and other pandemic-related economic shifts dull consumers’ buying power. In late September, Nike became the latest retailer to reveal that it has too much stock, with overall inventory spiking 44% since last year. Other brands, such as Gap, Target, and Macy’s, have previously announced deeper discounts to help clear their shelves, and Nike said it would be following suit.

Nike’s stock dipped more than 10% after the announcement by CEO John Donahoe.

The extra discounts could benefit inflation-weary shoppers as they gear up to spend on holiday entertaining and gifts. But for businesses, it’s the latest challenge to navigate since the COVID-19 pandemic threw global supply chains into disarray and upended consumer spending habits. It could also forewarn a broader economic downturn spurred by job losses, experts say.

“Retailers have cut some orders for the season, and the major shipping companies have cut the amount of departures to the U.S. West Coast as a result — I believe they usually cut one or two shipments this time of year, and 21 have been cut for this week,” Ray Wimer, a professor of retail practice at Syracuse University, told the Washington Examiner magazine.

“Retailers are trying to right-size their inventory as they see lower consumer demand,” Wimer said. “Many consumers have much less discretionary spending than this time last year given the inflationary pressures. This slowdown in spending could help push the U.S. economy into recession territory.”

Financial markets have been volatile since entering bear market territory earlier this year, and American economists have been divided on whether a recession is on the horizon or already here. Though the economy has slowed, unemployment, a key indicator of a recession, remains low.

But after earning record-high profits last year, bloated retailers could begin to shed employees as a result of this year’s drop in success, says Kelly Pedersen, merchandising practice leader at PricewaterhouseCoopers US.

“We've heard quite a few stories out there of retailers maybe having to resort to reducing things like labor force,” Pedersen told the Washington Examiner in a phone interview. “I don't think we've seen it en masse yet. I think many of them are kind of treating it as a last resort.”

“I've seen it in the tech sector,” he added. “I know that one's been hard hit. That's where a lot of that kind of job movement happened. But we haven't seen it as much in retail, but I wouldn't … be surprised if we see more of it soon.”

Several retailers, such as Walmart and Target, began warning of excess inventory earlier this year and started instituting more promotions. “The excess inventory built up for a number of reasons: continued supply chain woes, softening consumer demand over the summer, and retailer misses in inventory planning,” said Wimer, who teaches at Syracuse’s Whitman School of Management.

Pedersen said that because of the supply chain shortages earlier in the pandemic, many retailers “took this mindset that they were going to try to get everything they could get.” That included placing “a lot of purchase orders” to make sure they had enough stock going forward.

But as they came off “an absolute record 2021 where sales were up” and spending was high, in part due to COVID-19-related government stimulus checks, companies failed to predict this year’s drop fully. The uncharted and rocky post-pandemic economic environment has also complicated their forecasting. “They kept buying inventory to a higher sales plan or higher forecast,” he said.

The cost of goods and services has reached record highs in the past year, with inflation hitting 9.1%, a 40-year high, in June. As a result, consumers are spending more to buy fewer items, experts say. And the uncharted post-pandemic economic environment complicates companies’ forecasting.

That same month, consumer sentiment hit an all-time low, according to the University of Michigan’s monthly survey. “About 79% of consumers expected bad times in the year ahead for business conditions, the highest since 2009,” wrote Joanne Hsu, the survey director. “Inflation continued to be of paramount concern to consumers; 47% of consumers blamed inflation for eroding their living standards, just one point shy of the all-time high last reached during the Great Recession.”

In an effort to fight inflation, the Federal Reserve in March began raising interest rates for the first time in years, making it harder for consumers to borrow money and spend. Still, inflation has yet to cool significantly, and consumer sentiment “remains extremely low by historical standards,” according to the University of Michigan.

Retailers are now overstocked with many items that fall under discretionary spending, experts say, such as apparel, appliances, and electronics. In other words, consumers are focusing more on essentials like food as costs rise — and product shortages still exist in those categories.

Some companies with excess inventory have already announced smaller layoffs and hiring freezes. Gap Inc., which also owns the Old Navy and Banana Republic brands, said last month that it would cut around 500 corporate jobs after telling investors in August that it would “begin implementing later in the third quarter a reduction in overhead investments, including a pause on planned hiring and open positions among other actions.”

“Like so many others in our industry, we are managing through elevated inventory levels as a result of changing demand trends and shifting consumer preferences,” Gap's chief financial officer, Katrina O’Connell, said during the quarterly earnings call, according to a transcript by the Motley Fool. “Additionally, as you know, we've been navigating through product lateness and product acceptance issues, most notably at Old Navy, which has forced us to increase the level of discounting in an effort to better balance our assortment.”

O’Connell said the company had $3.1 billion in inventory, nearly 40% higher than the same time last year. “More than half of the … increase is attributable to elevated levels of slow-turning basics and the remainder seasonal product,” she said.

Another chunk of the increase is due to stock that the company has decided to “pack and hold” — in other words, store it away and try to sell it later. “We're confident that we will be able to integrate our pack and hold inventory with future assortments as the majority of goods are carefully selected seasonal core items we routinely use to round out our assortments,” she said. “Examples of these more timeless styles are basic shorts or short sleeve tees and tanks.”

Nike, for its part, plans to move more excess stock to its outlet stores, as well as discount chains such as TJ Maxx, CNN Business reported. The sportswear giant also said demand for its items, especially sneakers, remained strong.

The good news for retailers more broadly is that U.S. consumers say they plan to spend around the same amount on holiday shopping this year as in 2021, according to new data from PwC — though they are cutting back on nonessentials to save money.

“Despite citing fears of inflation and the rising costs of transportation and utilities as deterrents to holiday spending, most consumers — 74% — told us they plan to spend the same or more this holiday season as they did last year,” the firm says in its 2022 Holiday Outlook, released Oct. 6. “Aware that they might have to stretch their holiday budgets, some have already started to cut back on dining out, apparel, and streaming services.”

Millennials, in particular, plan to spend the most, $1,823 on average, over the holiday season, though not necessarily on clothes and shoes. After the so-called Great Resignation, in which many younger people shifted their priorities away from climbing the career ladder to mental wellness, “a big part” of millennials’ spending is now going toward travel and entertainment, Pedersen says.

“That group especially, which is ages 26 to 40, is really about experiences,” he said.

In another recent survey, the National Retail Federation also found that a majority (62%) of consumers “agree that it is important to spend on holiday gifts and celebrations.”

“However, 43% of consumers say they don’t earn enough to cover the costs of gifts and other holiday items this year,” the NRF said. “These shoppers are looking for other ways to supplement their income, including dipping into savings (40%), taking on credit card debt (32%), using services like buy now, pay later (25%) and selling assets (22%).”

PwC came to similar conclusions. As interest rates spike, consumers are increasingly using credit cards, and there is “an increased reliance on things like buy now, pay later [platforms] and some of these short-term subprime debts,” Pedersen said.

“Consumers are spending more, or they're still spending, but they're getting into debt,” he said. “So you can make the assumption that at some point, that's going to catch up with everybody. And it's going to hurt the economy if people are having to pay off these debts that are at potentially higher interest rates.”