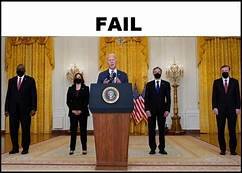 Although Biden is too far gone mentally to realize what he’s done, I believe his actions, probably done in order to get the praise of his young, woke staff, is dooming America, and very swiftly.

A few months ago Joey made the statement that he is a dedicated Capitalist, but he warned that Capitalism can’t exist without competition. Capitalism also can’t function without energy to make goods, distribute goods and get employees to work each day, so of course the first thing Joey did as president was begin choking off the energy supply our nation needs to keep our economy alive. But the one thing Joey forgot that closely accompanies competition in keeping an economy strong, is the freedom to operate without undo government fiddling with the rules. So of course Joey quickly began regulating and mandating the way corporations worked and what they must do and not do, and worst of all, he began forcing wokeness and the theory of “stakeholders” being parties that a company must serve first and foremost, before they could think about making a profit, all of which proved that old squinty Biden is really a Communist at heart and not a pro-American Capitalist.

And even though inflation has increased and Joey’s approval ratings have plummeted, we can be certain that either Joey is blissfully ignorant of these things, or his leftist staff has assured him that all of that insignificant stuff will correct itself over time and he’ll be seen as a green hero when it all mellows out.

The religious verve of leftists for the absolute lie of warming/change has anti-American Democrats behaving as though they are some kind of Svengali saving the world, when just a few days ago we were presented with the news that Sri Lanka had completely run out of fuel, which means no automobiles or taxis were getting people to work nor getting sick children to hospitals, and soon there will be no ambulances nor public buses either, if government won’t or can’t get enough fuel to jump-start the private economy. With the idiotic way Joey has been choking our energy supply and criticizing the industry that drills, refines and distributes fuel for Americans, and the thoughtless way he’s been depleting the nation’s Strategic Petroleum Reserve, we could go the way of Sri Lanka, and coming back from such a severe shock to an economy, we may well be over as a prosperous nation.

After all, at the same time that we have a shortage of fuel for transportation, there are store shelves sitting empty and many families can’t find baby formula for their children. And it’s all on Joey and his pack of hate-producing fools.

It’s finally come to the point where we must accept the fact that our government is intentionally attacking its citizens with a series of harmful strategies, while at the same time allowing an actual invasion of illegal aliens to cross our southern border.

The harm being done to America is intentional and our elected Representatives and Senators must be convinced to oppose this criminal foolishness or lose their cushy jobs at the elite feeding trough in our nation’s Capitol.

Agree/Disagree with the author(s)? Let them know in the comments below and be heard by 10’s of thousands of CDN readers!