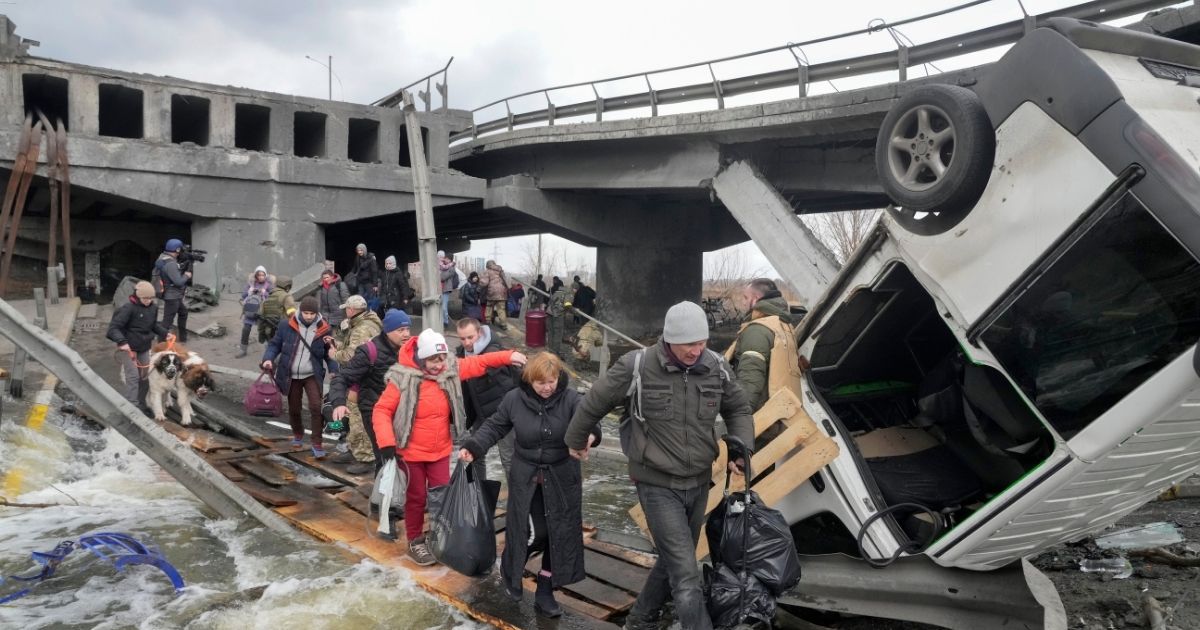 One of the miracles Jesus Christ is best known for was the feeding of 5,000 people with just five loaves of bread and two fish.

Well, over the weekend His body, the church, took up the mantle of feeding the hungry by assembling meals for those who have fled war-torn Ukraine.

The effort is being spear-headed by the non-profit CityServe International.

It may not have been miraculous, but it was truly amazing that in 24 hours over 1,800 volunteers came together at the City of Destiny church in the Orlando, Florida, area to pack 1,000,000 meals to ship to the region.

American Has Brutal Reaction to Gas Prices in Biden's America: ‘Sick to My Stomach'

“We just saw the hurt and the devastation from the people fleeing from Ukraine, from the oppression of [President Vladimir] Putin in Russia. It didn’t take a rocket scientist to figure out that we’ve got to do something here, that these people need food,” he said.

Are you inspired by the work these volunteers were able to accomplish?

“The amazing thing about this is we stood this project up in five days,” Lamphere added.

BBC reported Monday that 1.7 million people have fled Ukraine because of the Russian invasion. Over 1 million of those have gone to Poland.

City of Destiny church overseeing pastor Paula White-Cain tweeted that she was in awe of the humanitarian undertaking God brought together to help feed them.

I am in awe of God’s greatness- We saw more than 1,850 volunteers pack 1,000,000 meals in 24 hours… And when hungry Ukrainian refugees get this hot food and say, “look what the Lord has done,” it is because of you! Thank you!! pic.twitter.com/ou7dSx29xW

Lamphere credited the non-profit No Child Hungry with moving mountains to get all the food and packaging materials to the City of Destiny so quickly.

Mike Pence Asked Future Wife Karen To Not Make Him First in Her Life, God Deserves That Spot

He explained that half of the meals are breakfast with apple cinnamon oatmeal as the main component and the other half are pasta-based dinners.

Support CityServe’s efforts by donating here — you’ll be providing food, medicine and the Gospel to Ukrainians in urgent need.

The meals will be distributed primarily in Poland, Romania and, perhaps, Ukraine itself, Lamphere said.

“My heart has been heavy and burdened over what we’re all watching take place in our world today,” White said in a statement.

“Our dear friends in the Ukraine, people that I have ministered with, preached at churches with, not even know their whereabouts has been almost tormenting,” she added.

“We’re working through the churches in Poland and Romania, and we had people on the ground quickly.”

CityServe posted on its Facebook page that their leadership team arrived in Warsaw, Poland, on Monday and is working with one of the largest church networks in Europe to coordinate food distribution.

Our team has arrived in Poland! Ready to distribute the One Million Meals for Ukrainian refugees!!#ukraine pic.twitter.com/ZTb4trstWm

Western Journal stands in partnership with CityServe. Help on the front lines by donating to provide food, shelter and the Gospel to Ukrainian refugees.

Do more than just read about it, donate here.

Randy DeSoto has written more than 2,000 articles for The Western Journal since he joined the company in 2015. He is a graduate of West Point and Regent University School of Law. He is the author of the book “We Hold These Truths” and screenwriter of the political documentary “I Want Your Money.”

Will White House Walk This Back Too? Biden Suggests Low Gas Prices Are Never Coming Back