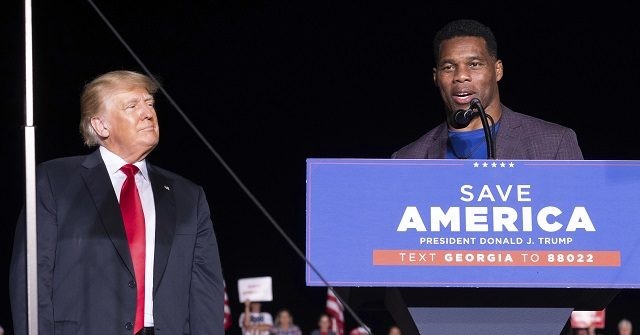 Former President Donald Trump maintained his ardent support for Republican Senate candidate Herschel Walker on Tuesday after he was anonymously accused of paying for an abortion in 2009, a claim Walker has denied as a scare tactic and a “flat-out lie.”

“Herschel has properly denied the charges against him, and I have no doubt he is correct. They are trying to destroy a man who has true greatness in his future, just as he had athletic greatness in his past,” Trump said in a statement on Truth Social.

“Herschel Walker is being slandered and maligned by the Fake News Media and obviously, the Democrats,” Trump added. “Interestingly, I’ve heard many horrible things about his opponent, Raphael Warnock, things that nobody should be talking about, so we don’t.”

Radical Democrat Sen. Raphael Warnock (D-GA), who is being challenged by Walker in the Georgia Senate race, has been accused of running over his ex-wife’s foot. His ex-wife told police after the incident that Warnock was a “great actor.” Warnock also allegedly “failed to reimburse” his ex-wife for childcare costs, leaving her “financially strapped,” according to a court filing.

Walker defended himself Monday on Fox News by stating the anonymous accusation was baseless. “I can tell you right now, I never asked anyone to get an abortion. I never paid for an abortion, and it’s a lie. … They’ve jeopardized my kids. They’ve jeopardized my family. They think they can threaten me. They think they can scare me,” he said. “Right now, all that’s done is that’s energized me even more.”