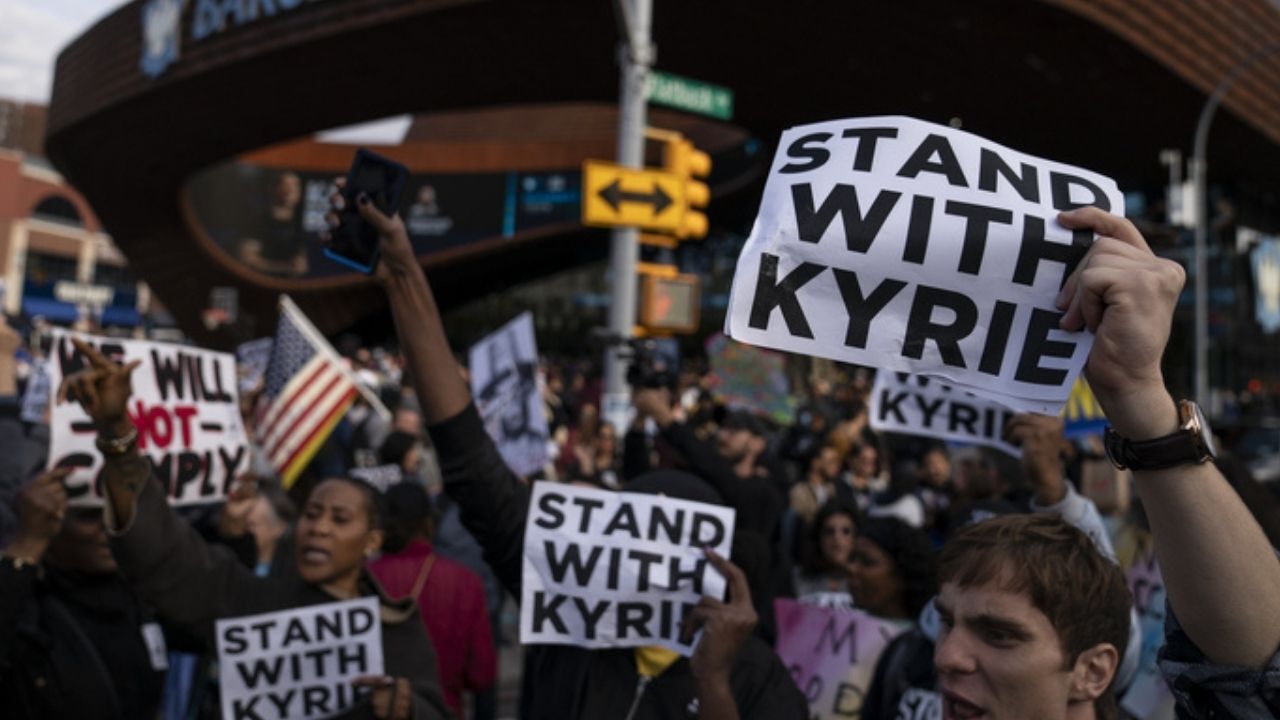 Brooklyn Nets star Kyrie Irving is not typically known for having conservative political views. However, his staunch opposition to vaccine mandates has put him in opposition to the progressive left.

During the Nets’ home opener at the Barclays Center in Brooklyn, New York on Sunday, a crowd of protesters gathered outside to support Irving and the fight for medical freedom.

While there is not a vaccine requirement for all NBA players, a New York City mandate prohibits unvaccinated players from playing inside the Barclays Center in Brooklyn, New York.

This includes Irving, who has spoken publicly about his refusal to get a COVID-19 vaccine.

“This is my life,” Irving said earlier this month according to ESPN. “I get to do whatever I want with this, this is one body that I get here.

“And you are telling me what to do with my body … This has everything to do with what is going on in our world. And I am being grouped into something that is bigger than just the game of basketball.”

Many people who agree with Irving showed up on Sunday to protest the vaccine mandate that is keeping him from the court. They chanted, “Stand with Kyrie” as they took to the streets.

Brooklyn, NYC, New York 🇺🇸 – Protestors march through the streets chanting “Stand with Kyrie”. Kyrie Irving plays for the NBA Brooklyn Nets & chose not to get a vaccine, going against the State’s mandate.

Should Irving be allowed to play?

According to Fox News, the protesters held signs reading “No mandates … My Body, My Choice” and “equal rights for vaxxed,” among others.

After marching through the streets, some protesters made their way to the doors of the Barclays Center. A group of Irving supporters had to be restrained by security after pushing towards the arena’s entrance.

Supporters of Kyrie Irving who are against vaccine mandates storm the doors of the Barclays Center in Brooklyn, New York. pic.twitter.com/aBA6YTWCCe

One of the attendees, who did not identify herself but told WPIX she was a school teacher, said her concern went beyond Irving himself.

In a statement to Fox News, the Barclays Center confirmed it had to temporarily restrict entry and exit due to the protest, but it said no unauthorized people entered the building.

“Barclays Center briefly closed its doors today in order to clear protestors from the main doors on the plaza and ensure guests could safely enter the arena,” the statement said.

“Only ticketed guests were able to enter the building and the game proceeded according to schedule.”

The Nets may have been able to use Irving during the game, which resulted in a 111-95 loss to the Charlotte Hornets. Fellow Nets All-Star Kevin Durant logged 38 points, but it was not enough to lift his team to victory.

Too good to be true? Caravan dissolves as Mexico promises work...