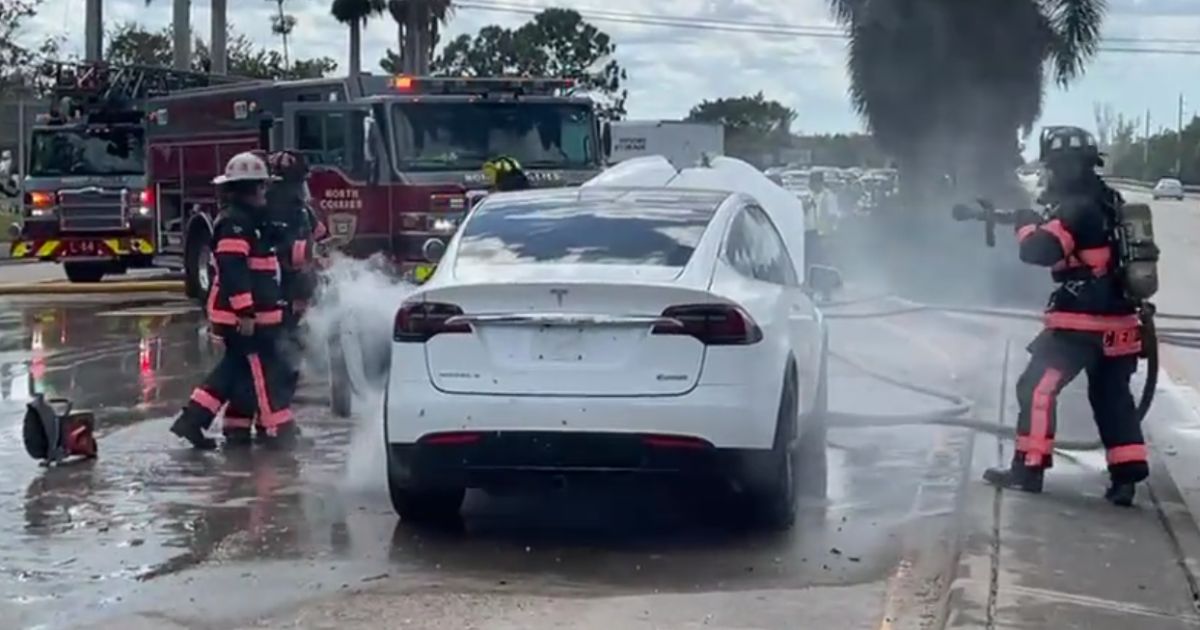 A south Florida fire department was called to the scene of a blazing Tesla on Thursday.

At the time, Rommel, Patronis and the department’s marshal were speaking to a resident who had an electric vehicle in their garage.

As the fire marshal was explaining the hazards that can occur with electric vehicles that have been submerged in salt water, the fire district received a call.

The call was about an electric vehicle that was on fire on U.S. 41.

Rommel and Patronis joined the fire department on the call and were able to firsthand witness the incident. The group arrived before the fire truck even got there.

Both Rommel and Patronis captured the event on video, which they later posted on Twitter.

“There’s a ton of EVs disabled from Ian. As those batteries corrode, fires start. That’s a new challenge that our firefighters haven’t faced before. At least on this kind of scale,” Florida’s Chief Financial Officer, who also happens to be a state fire marshal said.

Would you ever own an electric vehicle?

There’s a ton of EVs disabled from Ian. As those batteries corrode, fires start. That’s a new challenge that our firefighters haven’t faced before. At least on this kind of scale. #HurricaneIan pic.twitter.com/WsErgA6evO

“It takes special training and understanding of EVs to ensure these fires are put out quickly and safely,” Patronis added.

It takes special training and understanding of EVs to ensure these fires are put out quickly and safely. Thanks to @NCFRPio for their hard work. #Hurricanelan pic.twitter.com/oN0RvQTG2U

Rommel posted a similar video with the caption, “If you own any EV that was flooded in salt water get it towed away from any structure. Extreme fire risk and difficult to extinguish.”

If you own any EV that was flooded in salt water get it towed away from any structure. Extreme fire risk and difficult to extinguish. @elonmusk ,@ByronDonalds @JimmyPatronis .God Bless @NCFRPio pic.twitter.com/0rzW8ljHpK

Prior to the fire department arriving at the scene, a tow truck driver noticed smoke coming from the vehicle as he was towing it, Mazurkiewicz said.

The tow truck driver took the vehicle off the truck and put it on a turn lane on U.S. 41. He then called 911 and did “everything right safety-wise that he could possibly do,” Mazurkiewicz said.

When the fire crew arrived, they started their extinguishing efforts and realized they “needed to be able to put more water on it.” The firefighters eventually had to move the vehicle closer to the fire hydrant, allowing them to both get more water onto the vehicle and open up lanes of traffic.

In just the first two minutes, more than 1,500 gallons of water were used. They remained on the road pouring water on the EV for hours.

The fire was eventually extinguished, but the possibility of electric vehicles reigniting is a big issue, Mazurkiewicz said.

While this is the first electric vehicle in the North Collier Fire Department’s district to catch on fire thus far, the department has had to assist neighboring counties that have suffered a handful of similar blazes since the hurricane.

In total, there have been at least four incidents of EVs bursting into flames as Hurricane Ian rages on, Mazurkiewicz told The Western Journal.

South Trial Fire Protection & Rescue Service District posted of another Tesla that had ignited, asking the public not to call 911 for the Tesla in the ditch.

Similar to the incident in North Collier, the department responded to a Tesla on fire on the back of a tow truck. They were forced to soak the electric vehicle in a water-filled ditch for the next day or two to be sure it was extinguished.

A North Collier Fire Rescue truck can be seen at the scene.

“An EV vehicle that has been submerged in water likely has already had extensive damage. And then when you add the salt water to it, the salt water amplifies that,” Mazurkiewicz said.

“The vehicle fires for EV vehicles without being submerged is still an issue for us with regard to putting them out. But now, we have ones that have extensive damage we don’t know how they’re going to react and what’s going to happen.

“I mean, we’re pretty much in uncharted territory with regard to this amount of vehicles being submerged for the period of time that they were submerged for,” Mazurkiewicz added.

When asked about special training or knowledge involved with extinguishing electric vehicle fires, Mazurkiewicz stated that it takes special knowledge.

“There are classes that we send our firefighters to that talk about how to battle these fires…a lot of people only think about Teslas, but some of the other vehicles are hybrids,” she said.

“So there is specialized training involved in knowing how to proceed with caution for both the firefighters and the public.”

“People see the buildings demolished and they realize, you can see that and understand that. But there’s always unseen things that emergency responders have to deal with.”

“So we’re just glad that we were able to serve the community. And like I said before, we were really, really glad that we were able to have people like CFO Patronis and Representative Rommel on the scene so that they could see firsthand some of the issues that not just North Collier firefighters are dealing with, but the firefighters across southwest Florida right now,” Mazurkiewicz said.