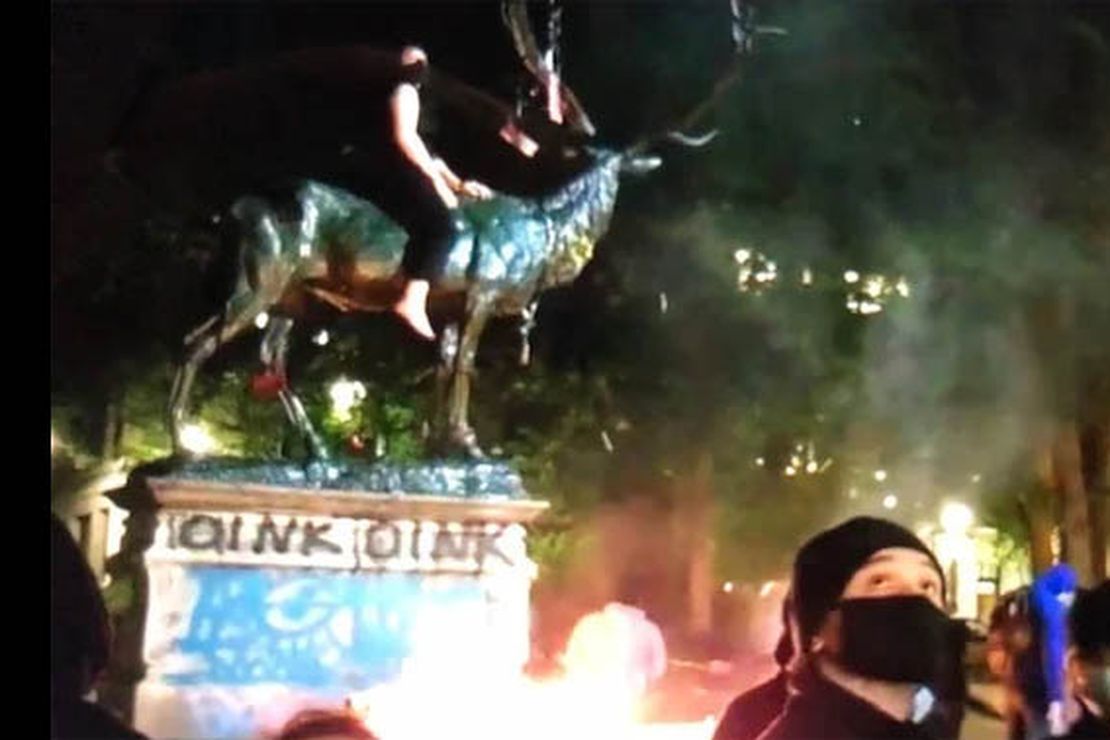 The Portland Parks Foundation just released an estimate of how much it will cost to restore the statue known as the “Thompson Elk” which was donated to the city in 1900. The bottom line is about $2 million including money to make changes to the street.

The foundation says it expects restoration, a new pump, and reinstallation could cost between $1.2 million and $1.3 million, as well as an additional $670,000 for street improvements, bringing the total to about $2 million…

It is now waiting to find out how much insurance will cover and what the city can pitch in.

Why is this necessary? Because back in 2020, social justice protests associated with BLM/Antifa held nightly protests near the fountain. At first the damage was mostly cosmetic, i.e. spray paint on the statue and the base. But the mob gradually worked themselves up into using the base of the fountain as a place to set a bonfire. This video is from the night of Wednesday July 1, 2020.

The next morning, the statue itself had survived (covered in spray paint) but the stone work around the fountain had been permanently damaged by the heat. You can clearly see some of the damage around 20 seconds into this clip.

Later the same day after the bonfire, city workers removed the statue claiming it was a safety hazard. It’s not clear to me how it was a hazard other than people lighting fires around it.

And about two weeks after that, crews returned to remove the damaged stone work as well. In it’s estimate of the cost to restore the statue, Portland Parks said all of the stonework damaged by the fire would need to be replaced.

The study determined that 18 of the fountain’s 50 pieces will have to be remade. They include some of the most complex. All four of the fountain’s five-foot-long troughs and some of the most intricately carved ornaments will have to be refabricated. “But the good news,” according to ARG project lead Maya Foty, “stone from the original stone quarry is still available.”

Here’s a graphic showing the portions that need to be replaced.

This statue has been the scene of many protests over the years but until 2020 it seems no one had attempted to destroy it as part of their protest. Now the city will have to pay up (above whatever the insurer gives them) in order to bring it back. And the people responsible for the damage? So far as I know, no one was ever arrested for this. Millions of dollars in damage to public art and not only is no one punished, no one even wants to talk about the group who destroyed it. As you can hear in this clip, the people who were there that night weren’t happy about anyone filming their faces.

Finally, as this local news story from 2015 points out, the statue was once the center of the city. It’s a shame the city has to pay large amounts of money to get it back after vandals destroyed it with impunity.