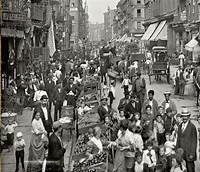 Maybe one of the reasons I am so passionate about people complaining, protesting, and demanding equity is my Italian heritage. Three of my grandparents emigrated to America from Europe. They all passed through Ellis Island in their search for the American Dream. We grew up in the same house as my Italian grandparents. My Grandmother, Nana, was born in the United States, and my Grandfather, my Papa, was born in Naples. Naples is in Southern Italy, which was a poor region. My Grandfather’s people were the farmers, the food providers, for Italy. The people of Naples had little, which is why they were attracted to the promise of the New World.

The Italians who loaded onto ships for the long, arduous journey to America were duped. The promise of an America with its streets paved with gold was a fantasy. Instead, they found a land where they were not welcomed with open arms. The living conditions were harsh, usually small apartments in rickety multi-floor buildings in the rougher sections of most cities and towns. The Italians were ostracized. They were the low end of the pecking order. They were the WOPs, the Dagos. They were discriminated against and had a hard choice to make. They could accept the place they were put into, or they could work hard and climb out to something better. The latter is what they chose.

Italians did not protest. They did not complain. They strapped on their boots and went to work. They were the laborers. They were the people that worked the looms of the mills or the leather of the shoe factories. They held on to their heritage as they built their own promised land. Nothing was ever handed to the Italians. They worked for everything they had. They were a proud people, and of all the things they passed down to their families, I cherish that pride the most.

I remember my Papa working tirelessly in his garden. Every Italian home had a vegetable garden, and it usually had a grapevine overhanging the tomato plants. He would be dirty and sweaty, but when my Nana was ready to go shopping downtown, Papa would be looking as dapper as could be in his suit, shined shoes, and his favorite hat. Papa never left the house without a suit and tie. I can still see Nana driving away with her white gloves. Hard workers, but their pride insisted they look their best when outside the house.

I was the first member of my family to go to college. My graduating from college was probably one of the most satisfying days of my Nana and Papa’s lives. One of their own had a college degree. The peasants from the farms of Southern Italy now had a piece of the American Dream. It took decades and a couple of generations, but they were patient. The smiles on their faces said it all. All the work, all the degradation, pushing through being told they would never amount to anything, was worth it all.

I will forever have the hard work ethic of my Italian heritage. I will always have thoughts of the traditions we enjoyed with Nana and Papa. Those traditions may be fading with the younger generations. Still, I hope that they might look back on the history of their Italian roots and realize the ingredients that their ancestors blended to make them the people they are today. If so, they may smile and understand the pride in their blood. I think of my Nana and Papa often, and it is with love and pride I say thank you for all you gave to us. Not the material things but the history you passed on to us. God bless you both.