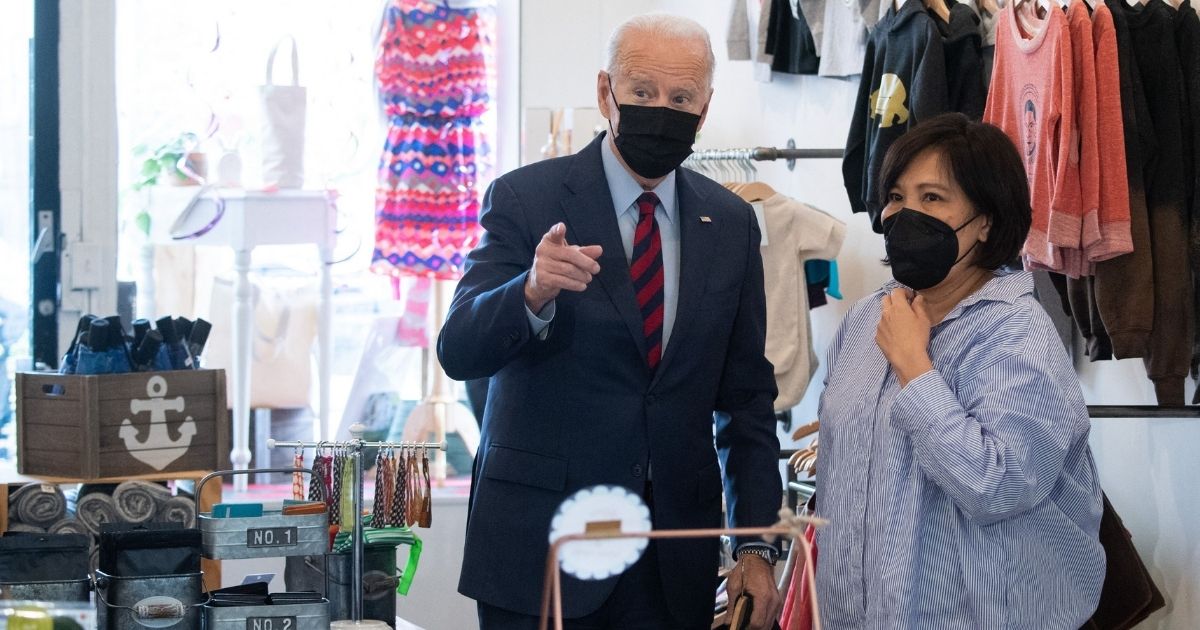 President Joe Biden is in over his head with serious crises at home and abroad — and surely our adversaries can’t help but notice.

While Russian President Vladimir Putin is busy massing his military, apparently on the brink of invading neighboring Ukraine, our president was busy purchasing a mug with the face of Vice President Kamala Harris in an ill-timed public relations stop.

“Pres. Biden speaks to the press during a visit to Honey Made, a small business in Washington, D.C.—while carrying a mug featuring Vice Pres. Kamala Harris,” ABC News tweeted Tuesday with a ridiculous photo of Biden clutching the novelty mug.

Pres. Biden speaks to the press during a visit to Honey Made, a small business in Washington, D.C.—while carrying a mug featuring Vice Pres. Kamala Harris. https://t.co/s33yoI9AWE pic.twitter.com/9OVBD12J55

Biden was shopping at the D.C. gift shop while speaking to reporters about the very serious situation in Europe, the U.K. Daily Mail reported.

With the shop as his backdrop, featuring such items as a throw pillow emblazoned with the face of a corgi, Biden elaborated on the conundrum the administration is facing with the burgeoning conflict overseas.

“There would be enormous consequences if he were to go in and invade, as he could,” Biden told reporters of Putin’s possible next step.

“If we were to move in with all those forces, it would be the largest invasion since World War II. It would change the world,” he said, according to the Daily Mail.

Do you think the optics of this are damaging to American credibility?

Putin has reportedly placed more than 100,000 Russian troops at his country’s border with Ukraine, and so far, Biden has mulled sending 5,000 American troops to North Atlantic Treaty Organization countries in Eastern Europe and the Baltics.

“I’d feel obliged to beef up our presence, NATO’s presence, on the eastern front,” Biden said about the possibility.

“I may be moving some of those troops in the near term just because it takes time,” the president said. He assured reporters that “every one of our NATO allies” are “all on the same page.”

These assurances ring hollow as Biden clearly prioritized this shopping trip — White House press pool dutifully in tow — as a way to revive his image as an empathetic guy among the people.

A recent poll showing Biden only has a 39 percent approval is part of a downward trend for the president, and the excuse du jour that Biden and his staff have landed on is that he’s just not among the people enough, according to NBC News.

Perhaps he and his team think that being seen purchasing items like the mug, a necklace for his wife, first lady Jill Biden, and a sweatshirt for his grandson, is enough to pull him out of the tailspin. (To be fair, the mug might have been a show of support for keeping Harris as his running mate in 2024, but was so disconnected from the current crisis it came off as just creepy under the circumstances.)

However, the problem is that Putin is also watching our geriatric leader flounder and flail while making a fool of himself buying political memorabilia when he should be projecting strength. That makes scenes like Tuesday’s downright disturbing.

With every policy decision he’s made, Biden has made things worse for the United States and likely the whole world if Russia doesn’t back down — but clearly, Biden is too out of touch to know the difference.