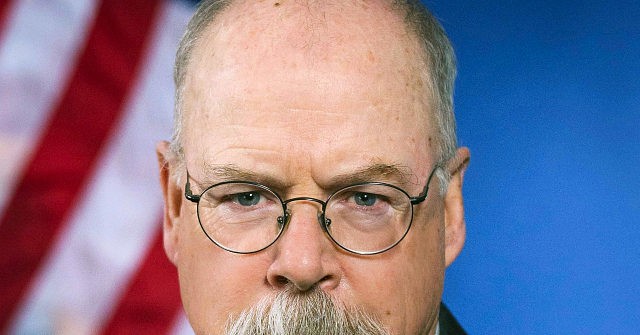 Former U.S. Attorney John Durham has told the Justice Department he will ask a grand jury to indict cybersecurity lawyer Michael Sussmann for allegedly lying to the F.B.I. during the “Russian collusion” investigation, according to the New York Times.

John Durham, who was appointed by the Trump administration to investigate the probe into Russia’s alleged election interference, will reportedly seek an indictment by a grand jury over a meeting between Michael Sussmann and the F.B.I. in 2016 when Sussmann claimed to not have been working on behalf of a client while raising suspicions about Donald Trump’s ties to Russia.

Michael Sussmann is now a partner at Perkins Coie – a prominent law firm often employed by Democratic politicians – and previously “represented the Democratic National Committee on issues related to Russia’s 2016 hacking of its servers,” per the Times.

Sussmann denies that was working on behalf of the Clinton campaign.

“Mr. Sussmann has committed no crime,” Sussmann’s lawyers, Sean M. Berkowitz and Michael S. Bosworth of Latham & Watkins told the Times. “Any prosecution here would be baseless, unprecedented and an unwarranted deviation from the apolitical and principled way in which the Department of Justice is supposed to do its work. We are confident that if Mr. Sussmann is charged, he will prevail at trial and vindicate his good name.”

Since Sussmann’s alleged crime occurred on September 19, 2016, Durham will have to bring a charge by this weekend due to the five-year statute of limitations for such cases. Attorney General Merrick Garland will reportedly not overrule Durham’s request for a grand jury to indict Sussman.

In 2016, Michael Sussmann met with the F.B.I.’s top lawyer James A. Baker to relay “data and analysis from cybersecurity researchers who thought that odd internet data might be evidence of a covert communications channel between computer servers associated with the Trump Organization and with Alfa Bank, a Kremlin-linked Russian financial institution.”

“The F.B.I. eventually decided those concerns had no merit,” noted the Times. “The special counsel who later took over the Russia investigation, Robert S. Mueller III, ignored the matter in his final report.”

Mr. Sussmann’s lawyers have told the Justice Department that he sought the meeting because he and the cybersecurity researchers believed that The New York Times was on the verge of publishing an article about the Alfa Bank data and he wanted to give the F.B.I. a heads-up. (In fact, The Times was not ready to run that article, but published one mentioning Alfa Bank six weeks later.)

Mr. Durham has been using a grand jury to examine the Alfa Bank episode and appeared to be hunting for any evidence that the data had been cherry-picked or the analysis of it knowingly skewed, The New Yorker and other outlets have reported. To date, there has been no public sign that he has found any such evidence.

According to Durham, Baker told investigators that Sussman said he was not raising suspicions about the Trump campaign on behalf of any client. However, during a deposition before Congress in 2017, Sussman said that he “sought the meeting on behalf of an unnamed client who was a cybersecurity expert and had helped analyze the data.” Furthermore, billing records that Durham obtained from Perkins Coie allegedly show that when Sussman “logged certain hours as working on the Alfa Bank matter,” he billed the time to Hillary Clinton’s 2016 campaign. At the time, Marc Elias, another partner at Perkins Coie, was serving as general counsel for the Clinton campaign.

Sussman’s lawyers have claimed that their client was not working on behalf of the Clinton campaign, insisting that he was “representing the cybersecurity expert he mentioned to Congress.”

“They are also said to have argued that the billing records are misleading because Mr. Sussmann was not charging his client for work on the Alfa Bank matter, but needed to show internally that he was working on something,” noted the Times. “He was discussing the matter with Mr. Elias and the campaign paid a flat monthly retainer to the firm, so Mr. Sussmann’s hours did not result in any additional charges.”

The cybersecurity expert who initially brought his concerns to Sussman has hired a new lawyer and wishes to remain anonymous. His attorney, Steven Tyrell, told the Times that his client is “an apolitical cybersecurity expert” who did not know Sussman’s law firm had a relationship with Hillary Clinton’s campaign.

“He sought legal advice from Michael Sussmann who had advised him on unrelated matters in the past and Mr. Sussmann shared that information with the F.B.I. on his behalf. He did not know Mr. Sussmann’s law firm had a relationship with the Clinton campaign and was simply doing the right thing,” Tyrrell said.

Based on questions that John Durham has asked witnesses in recent months, the Times concluded his team is “pursuing a theory that the Clinton campaign used Perkins Coie to submit dubious information to the F.B.I. about Russia and Mr. Trump in an effort to gin up investigative activity to hurt his 2016 campaign.”