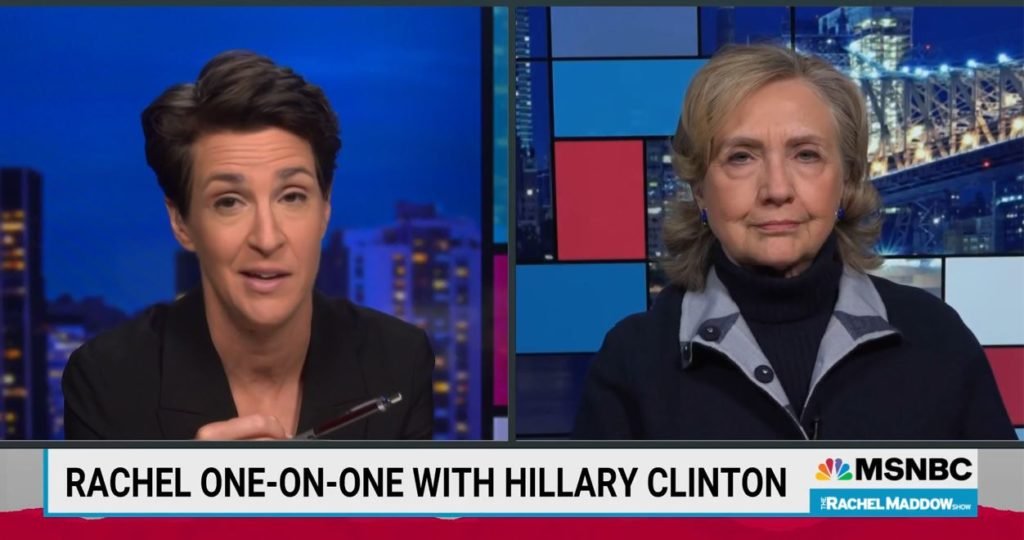 In a shortened holiday week like this one, we might expect there would be fewer candidates for KOTW. Virtually all Americans spent Thursday with their families where presumably the only opportunities to display someone’s knuckleheadedness was to their loved ones in a private setting. Similarly, Friday is traditionally spent either relaxing, or perhaps kicking off the holiday shopping season. Therefore, we could assume that with two less days for public idiocy we would see less of it: but that assumption would be incorrect. And Hillary Clinton is, once again, Exhibit A in proving our point.

Winner: Hillary Clinton explains that you’re too stupid to understand the news, and you need a “gatekeeper.”

The preference would be, of course, to never again have Hillary Clinton honored as the week’s top knucklehead, because for that to happen, she’d have to go away; never to be heard from again. And that’s where we’d all prefer her to be. Unfortunately, Mrs. Clinton just can’t help herself, and she can’t take a hint. Therefore, we have no choice but recognize her inanity once again.

During an appearance on Tuesday’s Rachel Maddow Show on MSNBC, Hillary reminded us once again why we should all rejoice at the fact she lost to Donald Trump in 2016.

The first example of Hillary’s foolishness with Maddow was her pointing to President Joe Biden’s supposed successes while citing his passing of two monstrous pieces of legislation. “By any measure those are extraordinary accomplishments.” By any measure, Hillary? Is that how we measure the success of a presidency? By simply passing laws?

The two bills Hillary alludes to are the Coronavirus Relief Bill from earlier this year, and the Infrastructure Bill that was passed earlier this month. Both bills are complete boondoggles that poured gas on the fire of our national debt without really helping anyone. Instead, both of those bills are fueling skyrocketing inflation, one of the primary elements driving Biden’s plummeting approval ratings.

The second instance of Hillary dopiness came when she showed her remarkable adeptness at gaslighting. The true problem with our lack of “appreciation” for Joe Biden’s greatness is the “exploiting” of misinformation. It’s not that Biden is just an absolutely awful president, you see, it’s that certain news outlets are informing you of that awfulness. “You know, democracy is messy,” said Hillary. “You know, a lot of people got, oh I think, kind of frustrated looking at the messy process of legislation.”

In other words, those of us who disapprove of Biden have reacted inappropriately to that messiness by blaming Biden and the Democrats for the ineptitude. It’s not the incompetence itself, mind you, it’s that you were told about that incompetence.

But the worst example of Hillary’s denseness came when she once again said the quiet part aloud, something she’s done repeatedly over the years. Hillary exposed her true feelings during the Benghazi Hearings when she asked, “What difference does it make” regarding the root cause of the death of four Americans. She didn’t care about those dead Americans, and we all knew it, but she wasn’t supposed to actually say it.

She did it again during her failed campaign in 2016 when she referred to Trump supporters as “deplorables.” That comment set off a backlash that led, in large part, to her eventual electoral demise. We all know the left views us that way – with utter disdain – but most of them, the shrewd ones, hide those true feelings. But not Hillary.

And she did it one more time this week with Rachel Maddow when she suggested Americans need “gatekeepers and people who have a historic perspective who can help us understand what we are seeing” when it comes to consuming the news. See how this works?

Hillary, and indeed most Democrats, don’t believe you are intelligent enough to process what you see and hear in the news. You’re not bright enough to make up your minds for yourselves. You need a gatekeeper to “help” you. You need some to provide “perspective” to make sure you come to the proper conclusions. You need an authoritarian to ensure your opinions align with Hillary’s opinions, because if you don’t, then you have the wrong opinion. And Hillary can’t have that.

Donald Trump was a flawed president, but every president is flawed. For an extreme example, consider Joe Biden. But Hillary reminded us once again this week how fortunate we were to have her lose to Trump in 2016. She reminded us of how much better off we were with Trump, and she exposed the Democrats’ true intentions when it comes to freedom of the press and the First Amendment. She reminded us that not only is she a horrible politician, she’s most probably an awful poker player as well. And Hillary reminded us, even though we didn’t need reminding, that she is, without a doubt, a knucklehead.

Honorable Mention #1: President Joe Biden is caught lying, once again, while reminiscing about the time his house got struck by lightning.

Biden’s Delaware house was struck by lightning in 2004, which resulted in a fire. Recently, while trying to justify his newly-signed Infrastructure Bill to reporters, Biden stated, “I know, having had a house burn down with my wife in it — she got out safely.” There’s only one problem with Joe’s story: the fire caused by the lightning strike was small and it was limited to Biden’s kitchen. Where, exactly, did Dr. Jill heroically escape to, Joe? The dining room?

Biden has embellished so many stories at this point, it’s hard to remember them all. I’m guessing this house fire heroism happened at some point between that time Joe chased a leprechaun and the day that he singlehandedly fought off a sabertoothed tiger. In Joe’s worldview he must engage in such exaggerations. Using a house fire as an example of why infrastructure improvements are needed just doesn’t work as well if you explain that the only thing at risk during that fire was your dishwasher and dinette set. Instead, Joe just makes crap up, like telling us that his wife was in mortal danger. And he hopes no one will call him out on it.

Acosta – more commonly knowns as ‘God’s gift to the mainstream media’ – apparently thinks he makes more of an impression when he uses naughty words on live TV. In launching a verbal attack on Tucker, Acosta called Carlson, without any censoring, “Bullsh—t Factory Employee of the Year,” implying that Fox News is the so-called factory. What’s noteworthy about Acosta’s assertion is, of course, the fact that if we’re going to call a news outlet a ‘BS factory,’ CNN is at the top of the list, bar none. CNN is the biggest BS factory of them all, and Jim Acosta is its Willie Wonka. Pick a topic, any topic, and it’s safe to say CNN led the league in BS. The Russia Hoax? Check. Kyle Rittenhouse? Check. Covington Catholic? Check.

For those wishing someone would just smack Acosta upside the head, Sen. Ted Cruz (R-TX) achieved that goal for us; figuratively speaking, of course. In response to Acosta’s grandstanding, Cruz tweeted, “There is a reason that @CNN has no viewers. It is not remotely a news organization. It’s just angry, dishonest, partisan propagandists. Can you imagine Walter Cronkite doing this? [Jim] Acosta is a [clown]. But that’s ok: 6X as many people will see this tweet.” Bravo, Senator Cruz.

Featured photo is a screengrab from MSNBC’s Rachel Maddow Show.