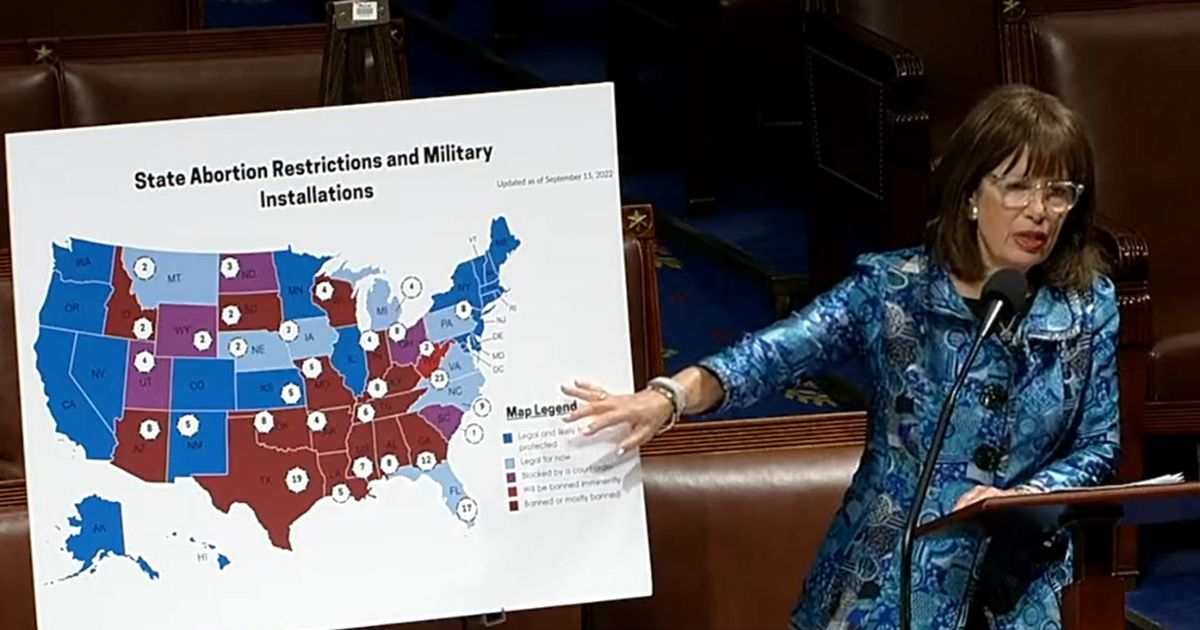 Democratic Rep. Jackie Speier of California suggested Tuesday on the House floor that 128 U.S. military bases in states with abortion restrictions should be relocated to other states.

She was promoting the Access to Reproductive Care for Servicemembers Act, a bill she and Democratic Rep. Jason Crow of Colorado introduced that would “codify and expand access to abortion care for US servicemembers,” according to their news release Tuesday.

In her argument on the House floor, Speier said that under the new bill, the Department of Defense would be compelled to “pay any travel expenses associated with an abortion and ensure servicemembers are able to take leave for their care.”

The congresswoman said her office has been “inundated with outreach from former and current servicemembers who are anxious and despondent about being stationed in what they are referring to as ‘forced pregnancy states,'” according to a House transcript.

“There’s a part of me that says we have 128 bases and installations in these red states, in these states that ban abortion,” she said. “Maybe we should just move these bases.”

Rep. Jackie speier (D-CA): “We have 128 military bases in red states that ban abortion. Maybe we should just move these bases.” pic.twitter.com/hXv94AbOyd

The congresswoman allowed a pause to linger for a moment before continuing, “Now, that’s highly unlikely because we’ve invested so much, but it just begs the question about what are we really all about if we’re going to treat these servicewomen so poorly?”

C-SPAN captured the congresswoman’s full remarks, which begin just before the 3-hour mark:

An interim rule submitted to the Federal Register on Sept. 1 by the Department of Veterans Affairs would allow the VA to “provide access to abortions when the life or health of the pregnant Veteran would be endangered if the pregnancy were carried to term, or when the pregnancy is the result of rape or incest,” according to a VA news release.

In a June 28 memo following the Dobbs decision, Undersecretary of Defense Gilbert Cisneros said the ruling would “have significant implications” for the “readiness of the Force.”

However, he wrote, “The Supreme Court’s decision does not prohibit the Department from continuing to perform covered abortions, consistent with federal law. There will be no interruption to this care.”

Cisneros’ remark about readiness drew the attention of GOP senators, who wrote a letter to Defense Secretary Lloyd Austin in July requesting specific evidence to support that claim.

Watch: Did Democrat Just Call for Violence in Response to the Proposed Abortion Ban?

In her news release with Crow, Speier said, “Abortion access should be a right, not a privilege. Yet a recent study estimated that 40 percent of servicemembers will have no or severely restricted access to abortion services where they are stationed — something they have no control over. The fallout of being denied care will be catastrophic, as is the threat to our military readiness, recruitment, morale, and unit cohesion.

“For servicemembers who must travel for an abortion, the expected cost is $1,100 or more, which is almost half of the monthly pay for a typical junior enlisted servicemember. The very least we can do is reimburse servicemembers’ travel expenses and ensure their request for leave is approved free from retaliation.”