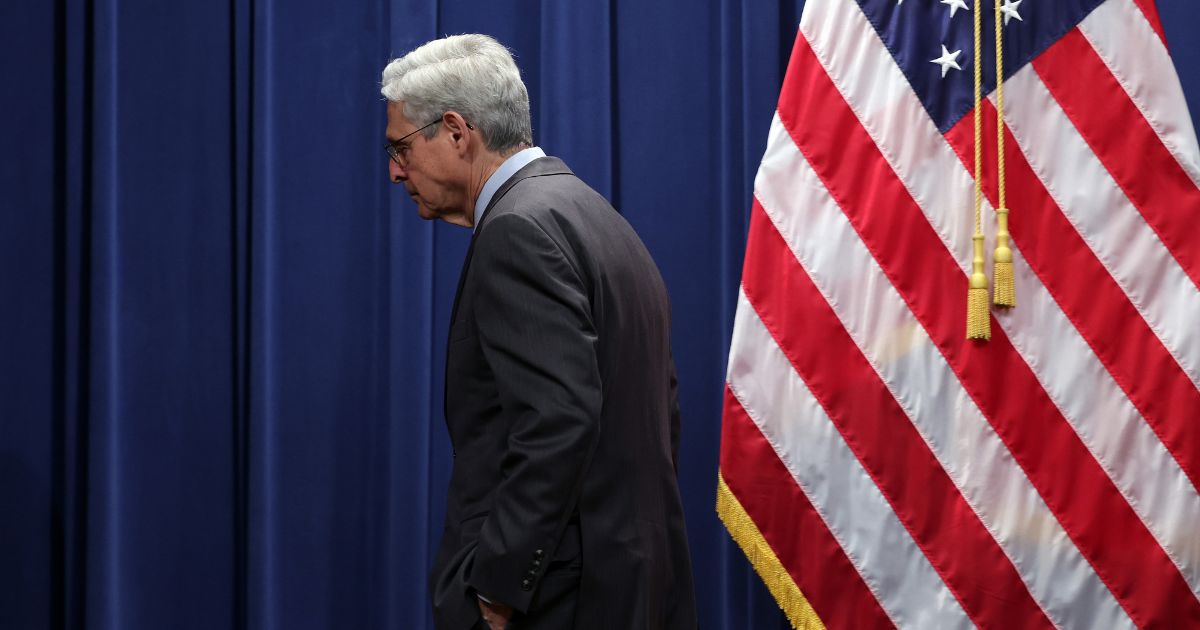 At the end of the day, it must be said that we may very well be living in some of the most interesting times in the history of America.

After Donald Trump announced his candidacy for president in 2024, Attorney General Merrick Garland announced late last week the appointment of a special counsel to continue, in yet another form, the same Democratic/RINO witch hunt that has wrongfully hounded the former president in different mutations for the last six years.

But this time, Trump’s response was different.

To Garland and all of America, he strongly suggested on Friday that he wasn’t going to take it anymore. Instead, he would be taking a stand by refusing to cooperate in this latest “investigation” — i.e., abuse of power — by the Biden administration.

Nor should he have to cooperate. Enough is enough! And it’s time for patriots across America to let him know we’ve got his six!

After all, as he quite rightly pointed out, why hasn’t the attorney general appointed a special counsel to investigate Hunter Biden and the rest of the Biden family criminal cartel — including the present White House resident — based on, among other things, all the evidence contained in Hunter’s “laptop from hell“?

To the credit of both President Trump and Resident Biden, we all know the answer only too well.

Trump — and, indeed, all of us who love our country — are presently in the crosshairs of a regime that has weaponized its federal law enforcement with the specific intent to destroy all of its political and ideological enemies. Such is the errant trajectory of our federal government.

It must be resisted, not only by Trump, but by all of us, and with great speed. For, if it is not resisted, it will soon end with the current regime obtaining its goals by eliminating the rights that previous generations of Americans thought to be their birthright. You know, like all those pesky little constitutional rights the current regime finds annoying, but that the rest of us are now coming to realize are vital if we ever hope to avoid bending our knees as indentured bondservants in submission to the tyrannical regime’s self-appointed ruling class.

For those who may doubt this, take as an advance warning the events the world is now witnessing taking place in Brazil, where its far-left dictator is now tightening the noose he has placed around the necks of those protesting his election. This weekend, he informed his adversaries that if they don’t stop protesting, go home and stay quiet — i.e., become submissive and obedient to his tyranny — their children are going to be seized and taken away from them by his government.

How long will the children be detained? Who knows? One might guess that will be decided later by the same regime that ordered them to be taken hostage in the first place — much like the J6 hostages our present government is holding indefinitely without due process for petty offenses. Such is the weaponization of law enforcement at its finest.

Except for those who willingly choose to remain blind to reality, the parallels between these events in Brazil and what appears to be evolving in America are becoming frighteningly uncanny. How is what Brazil is doing to suppress the people’s resistance to their tyrannical dictator any different than our law enforcement employing terror tactics to attempt to take down those whose only crime appears to be their desire to do what is necessary to ensure the sovereignty of their country and restore it to greatness?

With the appointment of the special counsel, the message being sent to Trump and those who support him is the same. We are to shut up and go away, or our government will make us pay a price none of us would want to pay… nor should we have to.

Will Trump defy the special counsel? And, if he does, will he be indicted for obstruction of justice and maybe even for insurrection? If that happens, will he be arrested and convicted, and thereby prevented from again becoming our president in 2024? If he is, where will that leave the millions upon millions of patriots who know that the president whom we firmly believe we need to reverse the course of this nation has been wrongfully set up by our government?

That is where we are as a nation.

Many of us who find ourselves on the sidelines while wanting to help are like the town folk in “High Noon.” We know a gunfight is coming that will greatly determine our future as a community, but trying to decide exactly what we should do before that event takes place — if anything — has only left us in a state of paralysis. We want to help, but we don’t know exactly what we are being called upon to do.

At minimum, we are now being compelled to prepare to make an important personal decision. Namely, what exactly would we be willing to do, if anything, to help Trump right a grievous wrong?

Which, in turn, is exactly what has made the times in which we are now living the most interesting of times any of us ever could have imagined.

The views expressed in this opinion article are those of their author and are not necessarily either shared or endorsed by the owners of this website. If you are interested in contributing an Op-Ed to The Western Journal, you can learn about our submission guidelines and process here.