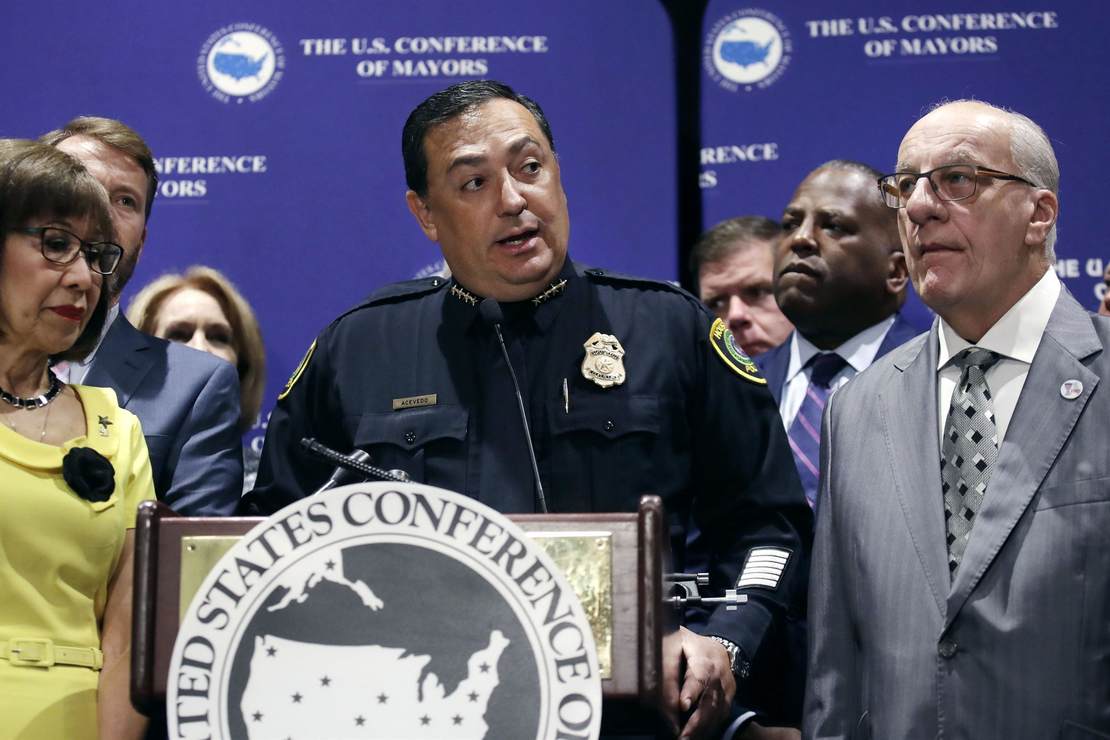 We could have told you, Miami. Residents of Houston are well aware of how you’re feeling right about now. We’ve been there, done that. Houston’s former police chief is your headache now.

In April, former Houston Police Chief Art Acevedo was sworn as the Miami Police Chief. So, he’s only been on the job a matter of months yet he already finds himself in some hot water. A month earlier, in March, he emailed HPD troops of his decision to leave that some officers working Sunday night received early. The Miami Police Department announced the news of his hiring at 9 a.m. Monday during a press conference. “This is like getting the Tom Brady or the Michael Jordan of police chiefs,” Miami Mayor Francis Suarez told the Miami Herald.

In the email, Acevedo called his departure “truly bittersweet.”

“We have been through so much as an extended family,” he wrote. “Hurricane Harvey, two World Series, a Super Bowl, (Imelda), the summer of protest, and most recently, an ice storm of epic proportion. On top of all this, we have sadly buried six of our fallen heroes.”

Acevedo said he hadn’t been looking to move, “but with the end of Mayor Turner’s final term in office fast approaching and my strong desire to continue serving as a police officer, we decided that the timing for this move was good. Good because you will continue to serve with the strong support of Mayor (Sylvester) Turner and his council colleagues and good because Executive Assistant Chiefs (Matt) Slinkard and (Troy) Finner are ready and highly capable of continuing to move our department forward.”

He is a politician at heart and a partisan Democrat at that. He knew a new mayor wouldn’t reappoint him so he left before he was out of a job. He left Houston City Hall in the dark, too, not just his officers. As I wrote at the time, the move was puzzling.

Frankly, this move is puzzling. Why would Acevedo go to Miami? The police force size is about a third of Houston’s. It was widely thought that he would run for political office, possibly mayor, since Turner is in his second and final term which expires at the end of 2023. There is no question that Acevedo is a political creature. He doesn’t miss an opportunity to slam Texas Republican politicians on social media, whether it is the state’s two GOP senators or the governor. He has come out in favor of stricter gun control restrictions and joined in with Black Lives Matter protest marches. He’s been photographed kneeling in solidarity with protesters. He endorsed Joe Biden for president, attended campaign events with Democrats, and contemplated pursuing a job with the Biden administration. He has taken on the NRA over gun violence. Now he feigns an absence of politics in his professional intentions. C’mon, man.

Apparently, he hasn’t changed. In just five months, he has so irked the city commissioners in Miami that a special meeting has been called in two weeks for Acevedo to face questions and perhaps have his fate with the city decided. He’s pissed off the large Cuban-American community, which takes a special kind of ineptness given the fact that Acevedo is also Cuban-American.

Miami commissioners — angered over a series of controversial decisions and gaffes by the new chief — have called for a special meeting in two weeks to grill Acevedo and potentially decide his future. Last week, in the most recent controversy, the chief drew a rebuke from commissioners for telling a group of officers that department was run by the “Cuban Mafia.”

Acevedo — a Cuban American who gained national prominence while serving as police chief in Houston during last summer’s Black Lives Matter marches — apologized for a comment he said he intended as a joke. He said he was unaware the term had been coined by Fidel Castro to paint Miami exiles as criminals for opposing his dictatorship. The majority of city commissioners are either exiles or have families who have suffered during the six decades of oppression under the Communist regime.

“I’ll be damned if I’m going to let a new transplant come here and do whatever he wants,” Miami Commissioner Joe Carollo declared from the dais at a meeting Monday night. “Each one of us are duly elected. And each one of us has deep roots in this community.”

Acevedo fired the highest-ranking police couple in the department for not properly reporting a patrol vehicle accident. He relieved a popular sergeant-at-arms from duty and demoted four majors, including one of the city’s highest-ranking Black female officers, without explanation.

He posed for a selfie — unaware, he said — that it was with a leading member of South Florida’s white nationalist group the Proud Boys. He’s rankled members of the judiciary by repeatedly blasting them for early inmate releases from prison and jail. Last week, it was disclosed that he had made the “Cuban Mafia” statement to about 100 officers during a morning roll call.

Again, he’s only been on the job for five months. Good heavens. The special meeting is scheduled for September 27. Commissioner Carollo wanted to do it during this week’s meeting but the agenda was packed, as was the audience, for a budget hearing. City commissioners can’t fire the police chief but a vote of no confidence would definitely influence the City Manager’s opinion of Acevedo. The City Manager is Acevedo’s boss. Fraternal Order of Police President Tommy Reyes has been at odds with Acevedo for months (!) and welcomes the special meeting. He doesn’t appreciate the remarks Acevedo makes to rank and file officers. “I think he’s done enough” to warrant the meeting, Reyes said. “He’s put his foot in his mouth enough times and made enough bad decisions that he needs to be called to the table.”

Acevedo and his parents arrived in Miami in 1968 but he was raised in California. Before being hired in Houston, he was police chief in Austin.

Acevedo’s latest kerfuffle in Miami involves apparent damage done to his personal unmarked SUV, a black Chevy Tahoe. No report was filed and the FOP president is calling him out for firing two officers, a husband, and wife, from the police force for not filing proper reports after blowing two tires on her vehicle after hitting a curb. A picture taken of the Tahoe shows scuff marks and a fender slightly separated from the SUV’s panel.