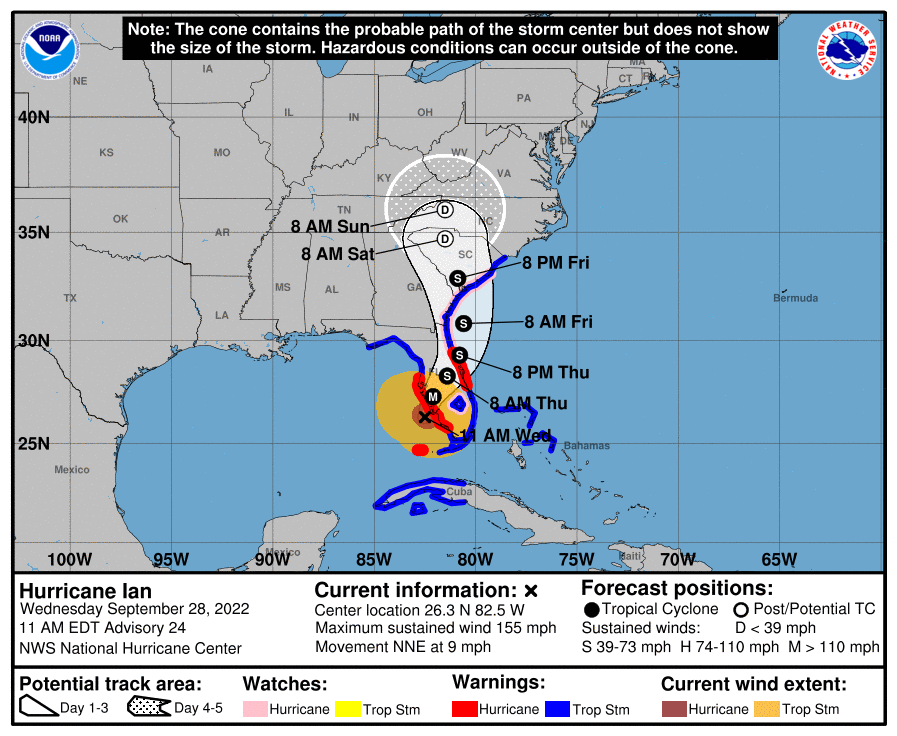 Be prepared for Democrats to exploit the devastation of Hurricane Ian to peddle de-modernization. And because there is no conclusive way for anyone to prove that global warming isn’t triggering every natural disaster — and because nature offers a continuous flow of these terrifying events and always will — the exploitation will never stop.

The effort began in earnest after 2005’s Hurricane Katrina, a Category 3 hurricane that devastated an unprepared New Orleans. There was Al Gore, with his grade-school “science” charts and cartoonish satellite images (water, the color of fire!), emotionally manipulating audiences with images of destruction and suffering. The problem was that “An Inconvenient Truth” suggested — among numerous other dire predictions that would never come to pass — that climate change had not only caused Katrina, despite negligible warming, but that it portended the dawn of an age of shocking and intense hurricanes.

“Hurricane Ian gets nasty quickly, turbocharged by warm water,” explains the Associated Press, which has been true since the first hurricane formed. More “climate havoc,” says The New York Times, as Ian threatens to hit the same exact places that storms have always hit. Today’s media simply can’t report on any flood or tornado or hurricane or brain-eating amoeba without making it about their favorite policy hobby horse. It just feels like things are worse, you know?

“What effect does climate change have on this phenomenon?” CNN’s Don Lemon asks Jamie Rhome, the acting director of the National Oceanic and Atmospheric Administration’s National Hurricane Center, about Hurricane Ian. “Because it seems these storms are intensifying.”

“Ok, listen, I grew up there. And these storms are intensifying,” responds Lemon.

He grew up there.

Joy Behar, cohost of “The View,” noted Wednesday that Florida Gov. Ron DeSantis says he is “not in the pews of the church of the global warming leftists.” “This is what he thinks about climate change. And now, his state is getting hit with one of the worst hurricanes that we will ever see!” This is a quite common attack, but it’s a non sequitur. Even if we accepted every alarmist forecast about anthropogenic global warming, and embraced the Democrats’ net-zero plan and banned gas-powered engines and fossil fuels by 2050 or 2030 or even 2024, the temperature wouldn’t be any different today. Forget India and China, not a single major economy that signed onto the Paris Accord has met its goals.

Of course, the underlying claim is also untrue. Since Behar’s birth in 1942, Florida has seen 48 hurricanes make landfall. Three of them have been Category 5 (so worse), nine of them have been Category 4 (including Ian), and 11 of them Category 3. Granted, Behar was not around for 1900’s Great Galveston hurricane, which hit eight years before Model Ts began emitting carbon into the air; it likely killed somewhere around 10,000 people in Texas. The 1926 Great Miami hurricane killed 372, causing an estimated, inflation-adjusted $164 billion in damage. Only around 150,000 people lived in all of Dade County back in those days. The Great Labor Day Hurricane of 1935 was tied with 2019’s Hurricane Dorian for strongest maximum sustained landfall winds (185 mph). Those were pretty bad storms, as were many others.

Critics will, no doubt, point out the rising cost of insurance payments due to hurricanes and other natural disasters. This is largely due to the concentration of people and wealth in coastal regions, a consequence of both rising population and wealth, and federal insurance programs that incentivize people to take on this risk. Critics will also point out that hurricanes are far less deadly now than they have been in the past because we’ve instituted warning systems and improved infrastructure and preparedness. And that’s right. Acclimatizing to the realities of climate is far cheaper and more effective than any state-compelled dismantling of modernity. No amount of scaremongering can change that reality.

ABOUT US
Contact us: [email protected]history.com
© 2022 - Patriots Make History - All Rights Reserved.