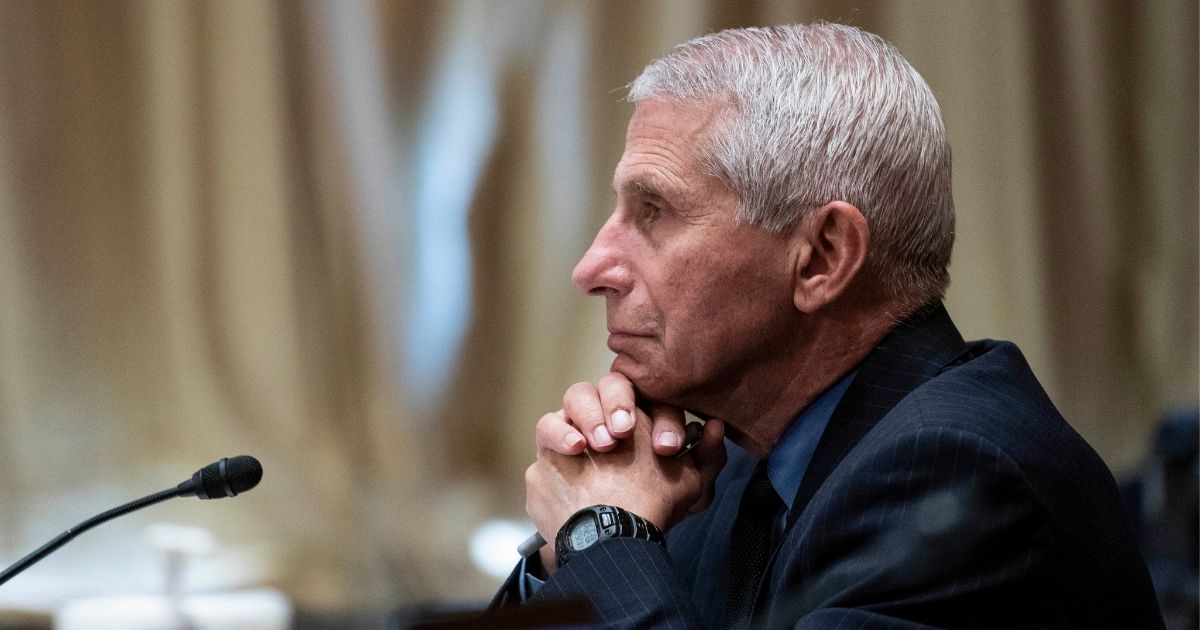 There’s no denying it now. Dr. Anthony Fauci lied to Congress about the National Institute of Health’s involvement in gain-of-function research in Wuhan, China — the source of the COVID-19 outbreak.

After months of so-called “experts” claiming the novel coronavirus couldn’t have possibly been developed in a lab, it was discovered that a research lab in Wuhan — the Wuhan Insitute of Virology — had been experimenting with modified bat coronaviruses in mice, which ultimately would result in the virus becoming more transmissible among humans.

However, the left’s favorite “expert” on all things COVID, Dr. Anthony Fauci, denied that the NIH ever funded such gain-of-function research in front of Congress.

Others among the left-wing elite — journalists, Democrats, scientists and other public health experts — backed Fauci’s play on this.

To them, all those who dared to suggest the NIH may have had some involvement in the testing and development of the coronavirus were spreading conspiracy theories.

Well, now we know the truth. As it turns out, it was the “experts” that got this one wrong.

Of note, Tabak’s letter pointed out that the bat coronaviruses under development at the Wuhan lab “are not and could not have become SARS-CoV-2,” due to genetic differences in the sequences of the viruses.

Do you trust the medical elite?

Just the News reported that the NIH funded the WIV because it had “determined the proposed research didn’t meet the standard for ‘enhanced pathogens of pandemic potential’ because it wasn’t shown these bat coronaviruses could infect humans.”

However, NIH “out of an abundance of caution” required EcoHealth (an organization partnered with the WIV) to “immediately” report “a one log increase in growth” should that have happened.

According to Tabak, EcoHealth failed to do so and now has five days to turn over “any and all unpublished data” from their research to the NIH.

It’s possible that when the proposed research was first brought before the NIH, Fauci was unaware that it would become gain of function. However, after COVID-19 spread to the human population, it is inconceivable to think Fauci did not put two and two together.

The letter shows that such research was taking place and Fauci, whether directly or indirectly, lied to Congress.

Furthermore, a report released on Aug. 1 by the House Foreign Affairs Committee found that safety protocols at the WIV were in question and, at the time of the outbreak, the facility appears to have been undergoing multiple maintenance and repair projects.

So, while many experts — including Tabak — are now claiming that the virus could not have come from the WIV, the available facts don’t seem to add up.

And, after a year of flip-flopping on COVID policies and lying about COVID-19 itself, how are we supposed to trust these so-called “experts”?

Anthony Fauci has been heralded as the most trustworthy of all of them by the establishment media and we now know that he lied before a legislative body. According to CNBC, anyone who “willfully and contrary to such oath states or subscribes any material matter which he does not believe to be true” has perjured themselves and is subject to a fine or imprisonment of up to five years, or both.

Unfortunately, thanks to his elite status, it’s unlikely Fauci will face the requisite consequences.

The rules simply don’t apply to those in charge, no matter how wrong their positions on COVID-19 continue to be.