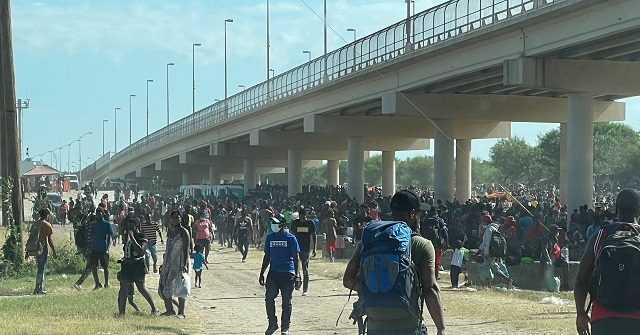 DEL RIO, Texas – A law enforcement source within CBP tells Breitbart Texas that the total number of migrant detainees held at the makeshift camp exceeds 12,000. The pace has increased substantially in recent hours, according to the source.

The Border Patrol is struggling to deal with what may be the worst migrant humanitarian crisis in the agency’s history. The local Border Patrol stations and processing facilities have reached capacity and can accept no more migrants. Available buses are being used to transport the migrants away but are not sufficient to meet the demands at present.

The Border Patrol in Del Rio is shutting down all highway inspection checkpoints to divert personnel to assist in the crisis. Local officials from the city held a news conference near the encampment on Thursday and described the situation as a humanitarian crisis. Val Verde County Sheriff Joe Frank Martinez says law enforcement officers are overwhelmed and feel abandoned by the federal government. The sheriff says local authorities are already investigating an assault among the migrants that occurred Thursday.

Randy Clark is a 32-year veteran of the United States Border Patrol.  Prior to his retirement, he served as the Division Chief for Law Enforcement Operations, directing operations for nine Border Patrol Stations within the Del Rio, Texas, Sector. Follow him on Twitter @RandyClarkBBTX.