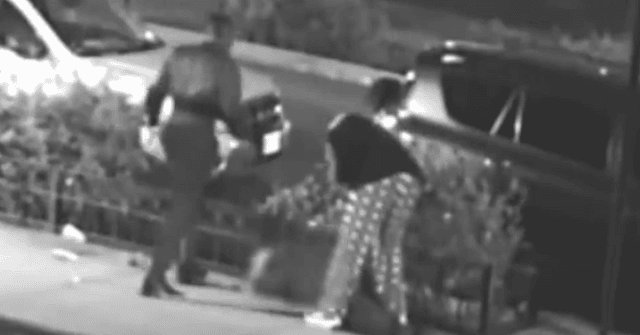 Police have released video of two people’s alleged attack on a woman in Brooklyn last week that resulted in her being taken to the hospital unconscious.

The individual was believed to still be in the hospital as of Wednesday, one week after it happened, PIX 11 reported.

Police said the incident occurred at approximately 3:15 a.m. on October 6 on Powell Street in the Brownsville area.

Surveillance video showed the moment a man and woman approached the 30-year-old woman. The female suspect appeared to punch her in the head, causing her to fall headfirst into a fenced planter:

🚨WANTED for ROBBERY: Know them? On 10/6/21 at approx. 3:14 AM, in front of 211 Powell St in Brooklyn, a male and female suspect approached a 30-year-old female, then punched and kicked her multiple times before taking her property. Any info? DM @NYPDTips, or call 800-577-TIPS. pic.twitter.com/2Ot2VJydrJ

The female suspect then appeared to continue hitting the woman as she lay on the ground, which knocked her unconscious, according to authorities.

The male suspect reportedly took the woman’s purse, two cellphones, cash, and a neck chain, while the other suspect kept hitting her, police stated.

At one point in the video, the female suspect appeared to stomp on the woman’s head multiple times.

Police told Pix 11 the attack was not random, and they believe it was the result of an earlier encounter between the victim and the female suspect.

“The woman was rushed to a nearby hospital for treatment of trauma to her head and face, authorities said. She is expected to survive,” the outlet reported.

A Rasmussen poll released in August in partnership with the National Police Association (NPA) found 70 percent of American voters believe crime is “out of control,” while 22 percent disagreed.

“A majority of those polled believe poor policy has to do with this year’s increase in violent crimes, including the elimination of cash bail requirements in some jurisdictions,” Breitbart News reported.

“Seventy-three percent of voters say letting accused violent criminals out of jail without bail while they wait for trial increases violent crime. Fourteen percent disagree, and 13 percent are not sure,” the outlet said.