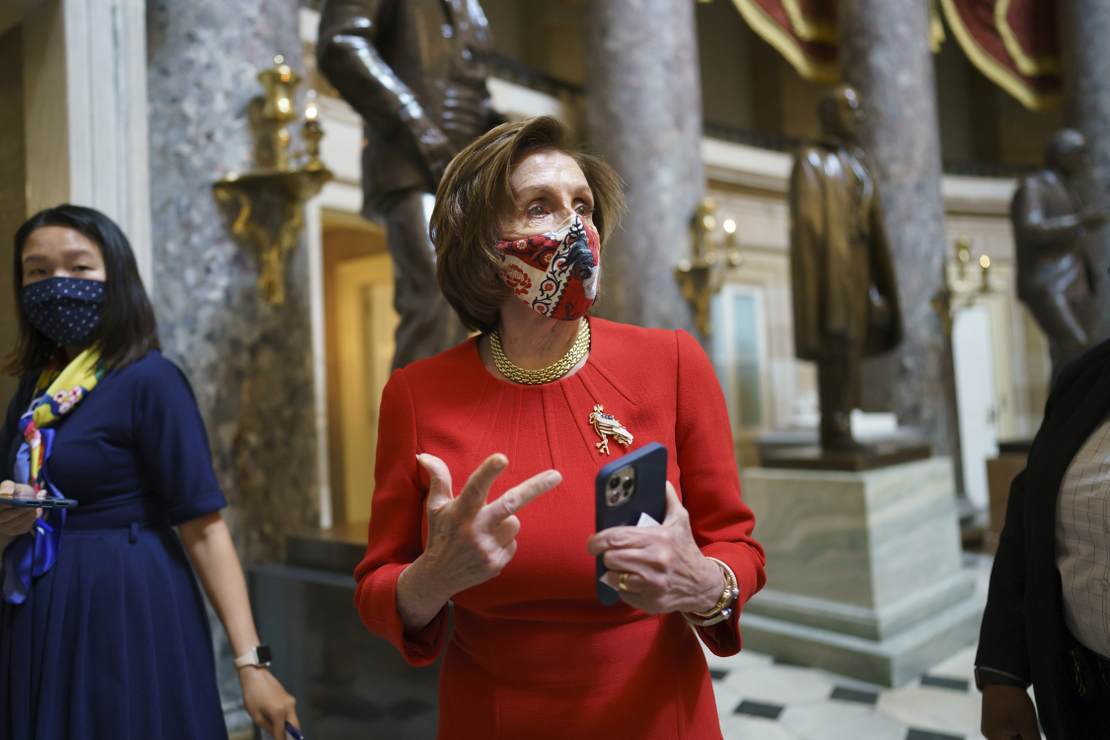 Infrastructuremas hasn’t been canceled … at least not yet. The prospects for the bipartisan infrastructure bill don’t exactly look cheery, however, as Nancy Pelosi caved at least in part to the progressive House caucus. Instead of the vote scheduled today for the $1.2 trillion bipartisan bill, Pelosi has pushed it off to Thursday — the same day that Congress has to act to forestall a government shutdown:

The vote will come hours before government funding — as well as key transportation programs addressed in the infrastructure bill — is scheduled to lapse on Oct. 1, leaving lawmakers with a narrow margin for error.

The Washington Post puts it more bluntly, calling this a “punt.” Pelosi appears to have lost confidence after House progressive caucus leader Pramila Jayapal claimed to hold 60 nay votes on the bill if it came to the floor today:

Today’s the day that House Speaker Nancy Pelosi (D-Calif.) vowed to bring the bipartisan infrastructure package to the floor.

But the speaker announced Sunday night the actual vote would slip until Thursday in a victory for muscle-flexing progressives. In case you were counting all the stress-inducing deadlines in Washington, that’s one day before the government will shut down if Congress doesn’t pass a separate bill to fund it.

Rep. Pramila Jayapal (D-Wash.), head of the Congressional Progressive Caucus, said she wasn’t bluffing when warning that progressives were willing to tank the infrastructure plan until the House and the Senate also pass a $3.5 trillion reconciliation bill that’s still far from finished. And it seems she meant business.

Pelosi may have finally figured that out. As late as yesterday morning, Pelosi told ABC’s George Stephanopoulos that the vote “may be tomorrow” (meaning today), but that it would take place when she was sure she had the votes. It’s not meaningless, therefore, that Pelosi later rescheduled it. Pelosi is still also arguing that the $3.5 trillion reconciliation bill has to pass as well, but …

GEORGE STEPHANOPOULOS, ABC “THIS WEEK” ANCHOR: But the question is — the question is, can you get everybody to agree to that? If I heard you correctly, you’re saying —

STEPHANOPOULOS: — the vote will not necessarily be tomorrow on the infrastructure bill. You’re going to put it up when you have the votes to pass it. Are we — (CROSSTALK)

STEPHANOPOULOS: It may be tomorrow, but — right. But let me just say, in order to get the votes to pass it, it sounds like you’re going to need agreement on the broader social investment bill, the bill —

STEPHANOPOULOS: And so that is going to happen this week as well?

That’s not happening at all, and Pelosi knows it. She punted that one last week back to the Senate after a few of Chuck Schumer’s caucus began barking at her to pass the reconciliation bill despite the Senate Democrats’ failure to move it. Even Jayapal seems to have balked at that, telling the Post that the Senate needs to pass their own bill first before expecting the House to do all the heavy lifting.

The delay is more consequential than the sum of its days. Pelosi may be hoping to roll up this bill into a continuing resolution to force the hands of progressives on a government shutdown. That really would be brinksmanship, as Republicans have even less reason to help Democrats keep the lights on under their current spending plan than they do to fund infrastructure. Republicans aren’t pushing for a shutdown either, but they’re not going to go out of their way to rescue Pelosi, Schumer, and Joe Biden from one either.

The polling on a shutdown and a debt default looks bleak indeed for Pelosi, according to a Morning Consult poll last week for Politico:

Democrats are in charge, and control their own fate on these questions. If they perform incompetently at them, that’s hardly the fault of Republicans. Thanks to Biden’s catastrophic bug-out in Afghanistan, Democrats already face a potentially historic drubbing in next year’s midterms. Pelosi may be rolling the dice to push progressives into accepting half a loaf, or to blame them when the entire agenda collapses.