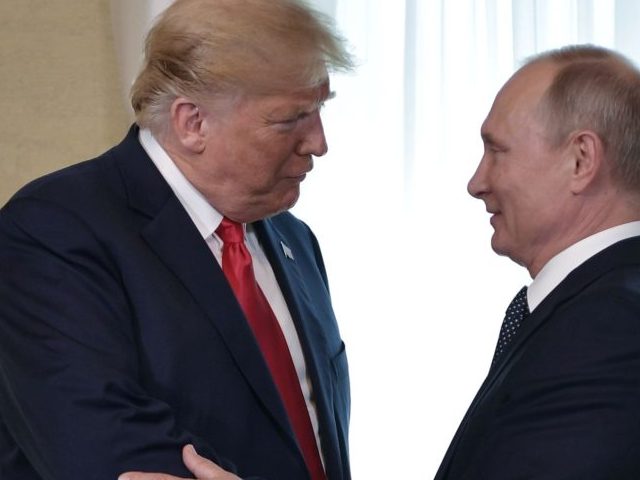 Sullivan and press secretary Jen Psaki — whose response to Russian aggression in 2014 was to launch a hashtag campaign — stressed the importance of “de-escalation,” of diplomacy over force.

Putin must certainly be shaking in his winter boots.

For four years, Democrats — including Sullivan, one of the key purveyors of the “Russia collusion” hoax — portrayed President Donald Trump as a “puppet,” a possible Russian agent who would allow Putin to do whatever he wanted.

Democrats impeached Trump over supposedly withholding aid to Ukraine in exchange for an investigation into Biden’s son, Hunter, who had engaged in shady business deals with a corrupt Ukrainian oil company while his father played dumb.

But it was the Biden administration who pressured Ukraine to stay quiet about its opposition the Nord Stream 2 pipeline, a threat to Ukraine’s security — and Europe’s — that Trump had steadfastly opposed precisely because it empowers Russia.

Ukrainian President Volodymyr Zelenskyy, the man Democrats said Trump tried to bully, confessed in June that Biden had made him both angry and disappointed. He got along just fine with Trump, who understood how to keep Putin in check.

While Trump was in power, America’s rivals and enemies did not dare cross the line. If they did, they risked ending up like Qasem Soleimani, the terrorist Iranian general whom Trump ordered killed in a precision operation that Biden opposed.

Biden accused Trump of risking war. But it was precisely because Trump was strong that America did not have to go to war.

Now that a weak, incompetent, and possibly corrupt Biden administration is in office, Putin is prepared to take advantage.

The danger of war is greater than ever — a war that could force the U.S. to intervene.

Democrats and the foreign policy “experts” claimed Trump was Putin’s man. Yet under Bush, Obama, and now possibly Biden, Putin did and does what he wants.

We are witnessing the superiority of “peace through strength,” of the efficacy of an “America first” foreign policy that does not rely on multilateralism and good intentions.

Joel B. Pollak is Senior Editor-at-Large at Breitbart News and the host of Breitbart News Sunday on Sirius XM Patriot on Sunday evenings from 7 p.m. to 10 p.m. ET (4 p.m. to 7 p.m. PT). He is the author of the recent e-book, Neither Free nor Fair: The 2020 U.S. Presidential Election. His recent book, RED NOVEMBER, tells the story of the 2020 Democratic presidential primary from a conservative perspective. He is a winner of the 2018 Robert Novak Journalism Alumni Fellowship. Follow him on Twitter at @joelpollak.