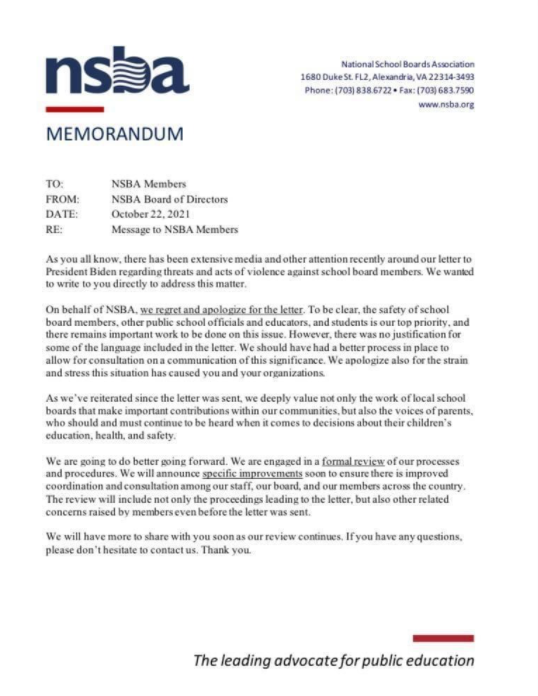 After blistering condemnation from parents, local school boards, and … just about everyone else, the National School Board Association (NSBA) issued an apology letter because they got caught being evil.

“As you all know, there has been extensive media and other attention recently around our letter to President Biden regarding threats and acts of violence against school board members,” the letter states. “On behalf of NSBA, we regret and apologize for this letter. . . . There was no justification for some of the language included in this letter.”

The NSBA issued a letter in late September likening parents’ to domestic terrorists over objections to critical race theory and authoritarian COVID mandates saying their actions “could be the equivalent to a form of domestic terrorism and hate crimes.” The association requested that the Justice Department use the Patriot Act, Gun Free School Zones Act, and other laws against parents who protest their school boards.

The NSBA first colluded with the Biden administration (or perhaps the Biden administration initiated) on the wording in the letter, meant to bring the full force of the federal government in to quell dissent. That set U.S. Attorney General Merrick Garland up for his quick response vowing to investigate parents involved in protests against CRT and COVID mandates.

Then the NSBA made the letter public, falsely believing they had the support of most Americans. The firestorm of anger they received in response became top national news. Therefore, the association had no choice but to cry “oops.”