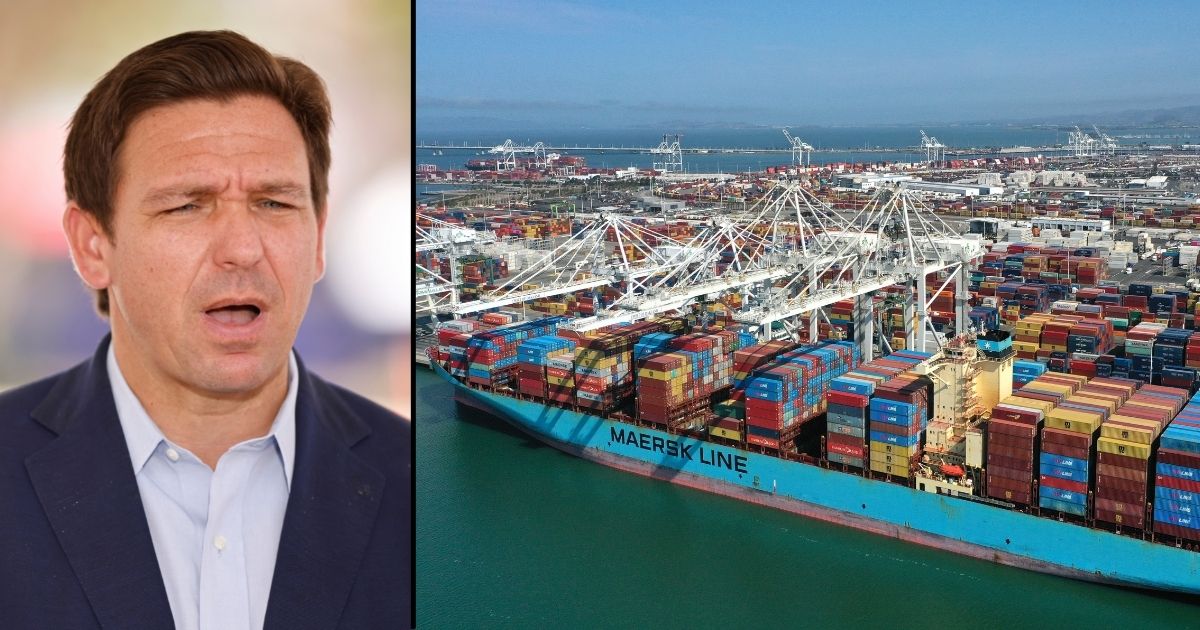 In a Wednesday speech, Gov. Ron DeSantis urged ships backed up outside California’s ports to make the trip through the Panama Canal to Florida — where ports are open and ready to unload goods.

“Year after year we continue to invest in our seaports, in infrastructure and in workforce education to make sure our supply chain is resilient,” DeSantis said during a speech at Jacksonville’s port complex, according to the American Journal of Transportation.

“I’m especially proud of Florida’s seaports. They are crown jewels in our state. While other U.S. ports are just now announcing around-the-clock operations, in Florida many of our ports are used to serving Florida farmers, families and businesses with 24-hour operations.

“As the rest of the nation faces rampant inflation and businesses stare down unprecedented supply chain problems, our message is this: Florida is here, we have capacity, we have incentive packages to help businesses who want to move here, and we are going to make sure Americans get their Christmas gifts this season.”

BREAKING: Gov. @RonDeSantisFL announces that Florida’s ports are open and will step up to ease the backlog of ships in NY and California contributing to the supply chain crisis. pic.twitter.com/zbCOdCV5Vv

DeSantis’ announcement came as the ports of Los Angeles and Long Beach broke the record for ships waiting to be unloaded, according to the Daily Mail. The new high-water mark of 167 ships was set just a month after the previous record of 161.

Do you think DeSantis' plan could solve the supply chain crisis?

President Joe Biden said Wednesday that the ports would be moving to 24/7 operations to deal with the backlog, according to the Long Beach Post.

“After weeks of negotiations and working with my team and with the major union retailers and freight movers, the Port of Los Angeles announced today that it’s going to begin operating 24 hours a day, seven days a week,” Biden said.

Considering the rivalry between DeSantis and Biden, Florida saving the supply chain would be a black eye on the White House.

This month, a Biden administration official admitted that there would be shortages this Christmas season.

“There will be things that people can’t get,” the official said.

“At the same time, a lot of these goods are hopefully substitutable by other things. … I don’t think there’s any real reason to be panicked, but we all feel the frustration and there’s a certain need for patience to help get through a relatively short period of time.”

In DeSantis’ book, there should be no need for substitutions or patience.

Whose message will resonate with voters: the Grinch’s or Rudolph’s?

It’s not hard to tell — provided, of course, that DeSantis can follow through like the red-nosed reindeer.