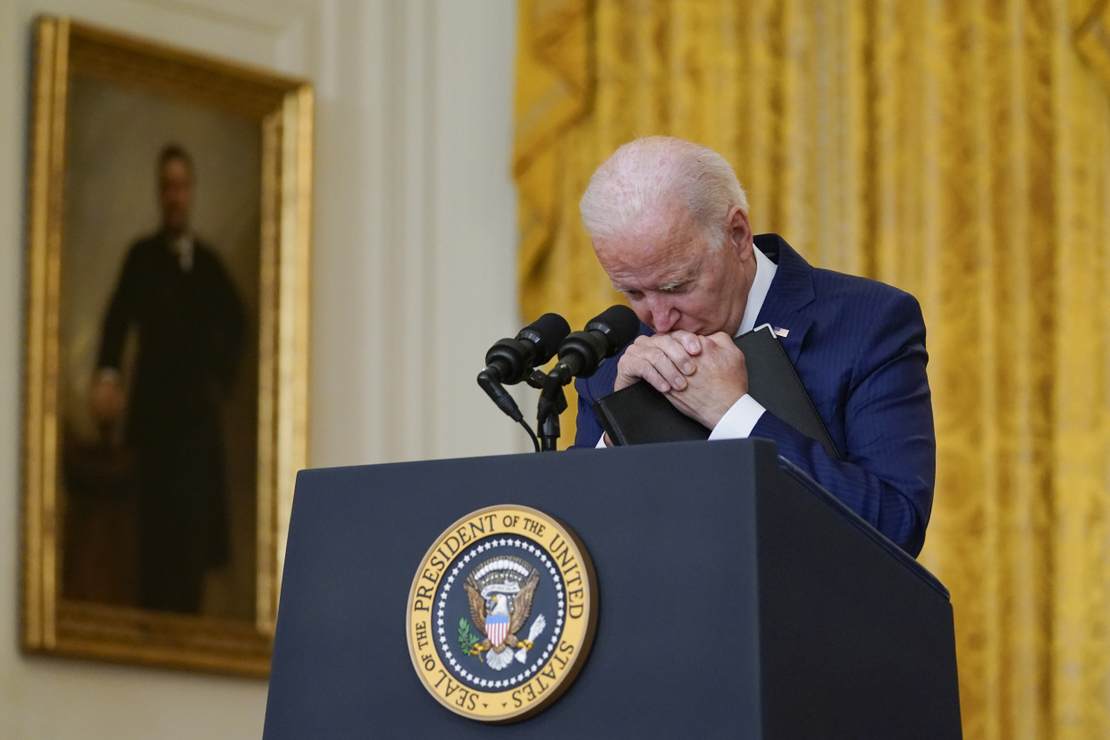 Six months ago this number stood at 54 percent. What happened?

The real scandal is the 49 percent who say he takes responsibility for his actions. Were those people in a coma during the two-week evacuation from Kabul when he blamed literally everyone, starting with the Afghans themselves, for his own failure to evacuate Americans and Afghan friendlies sooner?

For cripes sake, his last major statement on America’s disappointing summer with COVID was an extended rant about how it’s all the unvaccinated’s fault — which isn’t wrong, but still. He may mouth the words “the buck stops here” but he’s typically quick to follow it up by saying that actually the buck stopped a ways over there.

I think there are two explanations for why fewer people see him as mentally sharp now than this past spring. One, as Phil Klein says today, is that the debacle in Kabul shattered some voters’ perceptions of his competence. Until mid-August a swing voter could strain hard and semi-plausibly persuade themselves that Biden had a handle on things. He got the COVID relief bill passed, there hadn’t been any major crises abroad yet, vaccinations continued to tick up slowly. Watching the United States get pantsed by the Taliban a month after Biden told reporters that he didn’t foresee Afghanistan collapsing rapidly spoiled all that. “[T]he crisis showed Biden to be weak, lacking command, kind of out of it, and frankly, too old,” Klein writes today. To control the country for 20 years and then somehow end up pinned down to a single-runway airport in the span of a few weeks, forced to rely on jihadis for perimeter security, does seem redolent of a certain degree of brain damage.

The other explanation is that many more Americans are exposed to Biden day to day than was the case last year, when he was campaigning sporadically from his home in mostly scripted events. He often sounded tired (understandably) during the Afghan drama, even when discussing other subjects. Because of his age, it’s natural for people watching on TV at a moment when he sounds halting to conclude that he’s lost it and to let that color their judgment of his competence generally. I have relatives who routinely mention to me how sometimes, before he starts a Q&A at a press conference, he’ll say something like, “They told me not to take any questions, but here goes.” I take that as Biden being self-deprecating but my relatives take it as another sign of feeble-mindedness, something he’s saying aloud because he now lacks the presence of mind to censor those thoughts.

It’s true, by the way, that his staff prefers him not to take questions. Sometimes they’re adamant about it:

It’s also true that the GOP has made hay of Biden’s age and alleged decline, most recently in questioning Tony Blinken:

That’s another belief held by one of my relatives, that someone in the White House other than Biden is calling the shots. When you have a population primed to believe that Biden is sundowning and then he goes and botches something as badly as he did withdrawal from Afghanistan, go figure that Americans might decide he’s not as “mentally sharp” as they thought. More from Amy Walter:

However, the challenge for Biden is that these early mistakes go directly to the very rationale of his presidency; that it would be low drama and high competence. This was especially true with Afghanistan. While Americans are eager to have our troops out of the country, and may even have assumed there’d be some chaos due to that drawdown, they also expected that this administration’s deep expertise and experience, would prepare them for any unexpected snafu. That turned out not to be the case…

On top of it all, the former senator and vice president looks more like a helpless bystander than an experienced Capitol Hill deal maker, watching from the sidelines as his party struggles with internal divisions over critical legislation. For many voters, things in Washington look like more of the same; politicians squabbling instead of solving problems.

There’s another noteworthy number from this poll, by the way:

That’s a big shift in two months, leaving him with numbers that are scarcely different from Trump’s polling over most of his presidency. It’s no outlier either, as Gallup had Biden at 43/53 yesterday. The worse his approval gets, the more pressure congressional Dems will feel to hand him a big win in hopes that it’ll turn his support around. If the S.S. Biden goes down, they’ll drown next fall.