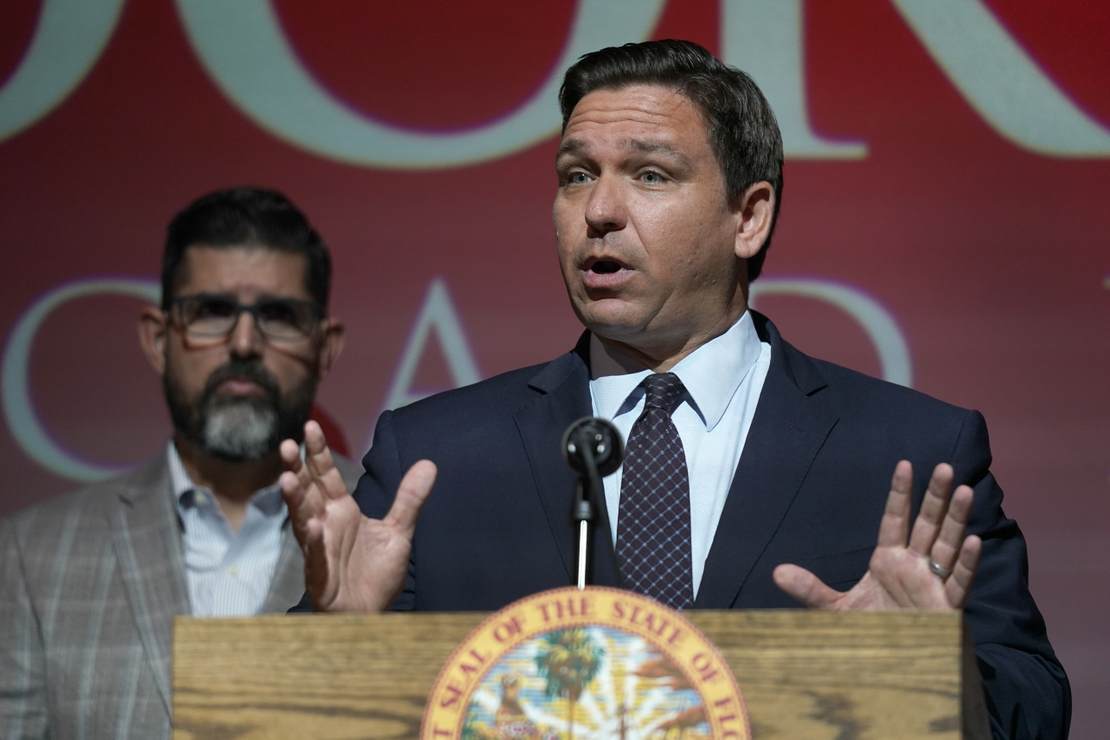 DeSantis has a great advantage over Trump in the 2024 sweepstakes in that he’s currently in office whereas Trump is not. And not only is he in office, he’s a governor, a role that gives him enormous power over shaping policy. While Trump spends his days tweeting — sorry, “truthing” — DeSantis is putting one win after another on the board for conservatives in Florida. Righties like to say “he fights!” of both, but at the moment only DeSantis is fighting in a way that actually improves people’s lives.

The caveat to his advantage as an office-holder, though, is that he’s going to have to grapple with the short-term sh*tshow of post-Roe politics in America in a way Trump will not. Trump can shrug it off by saying, “It’s a state issue now,” and then hit the golf course. DeSantis will be in the thick of it.

And no matter what he does, he faces political peril.

He recently signed a bill into law that bans abortion in Florida after 15 weeks, a shrewd compromise that places him and the GOP in the sweet spot of national opinion on the subject. Most voters are willing to allow abortions in the first trimester but are open to meaningful restrictions after that. That’s exactly what Florida’s new regime does, befitting a state that’s still purplish. It makes sense in the context of DeSantis’s reelection campaign too. He’s earned some goodwill from Democratic voters there for keeping schools and businesses open during the pandemic. He doesn’t want to make any false moves months away from Election Day that might spook them, like signing a total ban on abortion into law.

But does he have a choice? If the state legislature puts a total ban on his desk, what will he do?

He should start thinking about it. The rumblings have begun.

Florida Republican leaders are signaling they’re open to a complete ban on abortions next year if the Supreme Court overturns the landmark 1973 Roe v. Wade decision…

[State Rep. Webster] Barnaby said in an interview that he believes a bill banning all abortions in Florida has the votes necessary to be approved by the full House, though he had few details about what exactly the measure would do, such as whether there would be exemptions for victims of rape.

“We now have the political will to get things done that nine months ago we may not have gotten done,” Barnaby said. “And I believe that we now have the will and we have the votes in the House to pass legislation that will ban abortion in the great state of Florida for life.”…

Incoming House Speaker Paul Renner said it’s up to the 160-member state Legislature to decide whether to enact a full ban on abortions in the state. But Renner, who said he is “unequivocally pro-life,” added that the Supreme Court’s decision on Roe will clearly give the anti-abortion movement momentum.

DeSantis hasn’t been eager to discuss the possibility of a total ban publicly and Democrats have noticed. State Rep. Anna Eskamani accused him recently of being “scared,” adding, “It’s clear to me that Florida Republicans, including Gov. Ron DeSantis, are super awkward and uncomfortable talking about an all-out ban. They want to avoid it as much as possible, because they know the second they commit to it, it will wake up voters across the state of Florida and that is not what they want to do before a November election year.” DeSantis’s normally pugnacious spokesman, Christina Pushaw, declined to respond to Eskamani’s accusation, presumably because there’s some truth to it. If DeSantis goes all-in on a total ban, he risks alienating the Dem voters who like him and goosing liberal turnout in Florida. That would be a dangerous thing for a guy who’s counting on a landslide win in his election to boost him as a 2024 presidential contender.

But he can’t shoot down the idea of a total ban either. That would cost him part of his “he fights!” cred among social conservatives. And it would leave him open to harsh attacks from the right by other 2024 aspirants like Greg Abbott, who’s already gone further than Florida has to limit abortion in Texas. In fact, because Florida’s 15-week ban is lenient compared to the strict bans expected in neighboring red states, Florida could become an *abortion destination* for women in the conservative south. Imagine the sort of heat DeSantis would take on a debate stage in 2024 for letting his state become an abortion mill, frustrating the attempts of other pro-life governors to reduce the number of babies aborted by their states’ residents.

DeSantis’s ideal solution would be to wait ’til next year, I assume. Stick with the 15-week ban until he’s safely reelected, then move to satisfy righties in 2023 with a total ban knowing there’s nothing Democrats can do to punish him at that point. But I don’t know if he can afford to wait. Dragging his feet on a total ban would also leave him open to attacks by 2024 rivals.

There’s another complicating factor: The Florida Constitution. Section 23 of that document’s Declaration of Rights reads, “Right of privacy.—Every natural person has the right to be let alone and free from governmental intrusion into the person’s private life except as otherwise provided herein.” The standard pro-life argument against Roe, that there’s no “right of privacy” in the U.S. Constitution, isn’t true in Florida thanks to the state Constitution. And yes, unfortunately, the Florida Supreme Court has already interpreted their state’s constitutional right of privacy to encompass abortion.

That precedent could be overturned by the current conservative majority on the court, just as Roe is on the brink of being overturned by SCOTUS, but the fact that Florida’s court will be working with a written constitutional right — one that was added years after Roe was decided, when “privacy” had come to be seen as the basis for abortion rights in the public imagination — may make the court reluctant to undo it. Which would be good news for DeSantis, ironically. He could stick with the 15-week ban (assuming that passes the court’s muster) and say that he’s prevented from going further by the state Constitution. The court would solve his problem for him.

But if they overturn their precedent and declare that a total ban wouldn’t run afoul of the privacy clause, he’d be back on the hot seat. Even if they don’t overturn it, pro-lifers will scramble to try to get a new constitutional amendment passed creating an exception for abortion from the state constitutional right of privacy. DeSantis could live with that, I assume — he could endorse the amendment in the expectation that it’ll fail to get the support that it needs to pass, once again sparing him from having to do something meaningful in the form of a total ban.

While he’s sweating all of this out, Trump will be living it up at Mar-a-Lago. As I say, being governor is an advantage — but not an absolute advantage.

I’ll leave you with this tweet from MAGA favorite Lauren Boebert, whose mind is on gun control today. Do populists really want to take this position when they’re on the cusp of being able to legislate against abortion for the first time in 50 years?

You cannot legislate away evil.