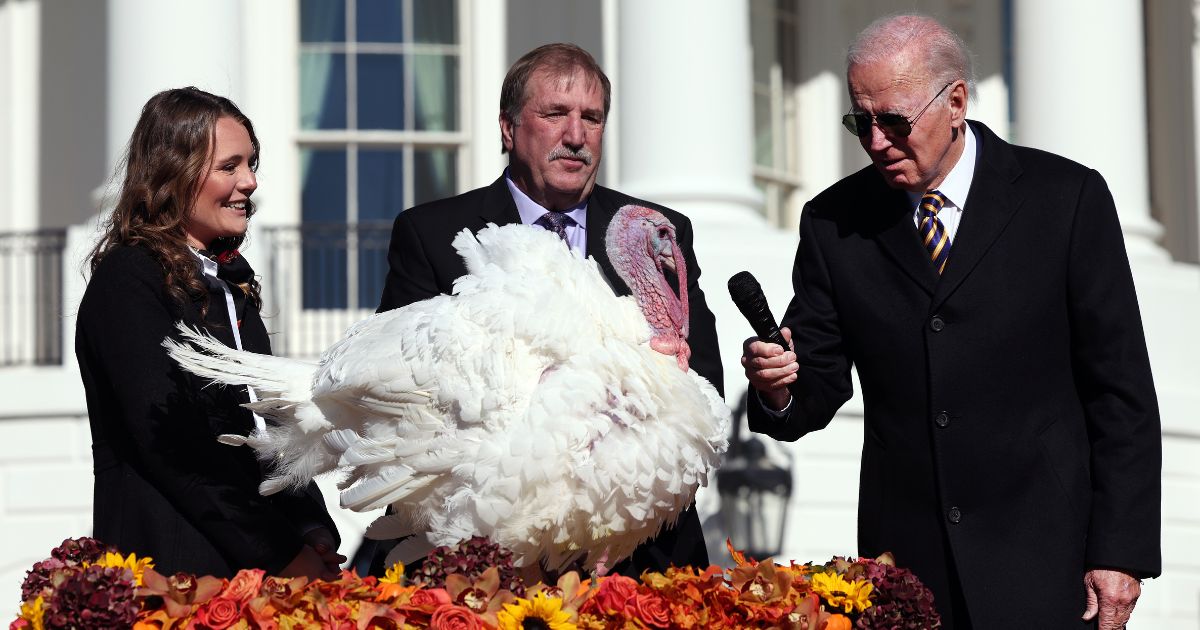 Adding to a long list of embarrassing social media posts by President Joe Biden’s administration was a real beauty on Thanksgiving Eve.

White House Chief of Staff Ron Klain and Deputy Communications Directors Jennifer Molina and Herbie Ziskend were among the Biden administration officials who tweeted a bizarre infographic on Wednesday titled “President Biden’s Top Accomplishments for when chatting with your Uncle at Thanksgiving.”

They suggested that Biden’s loyal sheep use the cheat sheet at the dinner table to control the narrative if someone makes a negative remark about the cognitively challenged president.

“One last item for your Thanksgiving dinner: some talking points when ‘that Uncle’ comes ‘at you’ about @POTUS,” Klain’s tweet said.

One last item for your Thanksgiving dinner: some talking points when “that Uncle” comes “at you” about @POTUS. pic.twitter.com/P9X0wDRRZK

The White House failed to mention that many Americans will be forced to skip Thanksgiving dinner this year, or severely dial back on what foods they buy, thanks to Biden administration policy decisions that have, in part, led us into a record inflationary period.

Twitter users helped to set the record straight on inflation and Biden’s other “accomplishments.”

Jen, I think we have different definitions of “tackling”.

One last item for YOUR Thanksgiving dinner: pic.twitter.com/0O7YFMQGd4

Maybe the niece/ nephew is the problem. pic.twitter.com/TfKHMMXxgg

One user hilariously erased everything below the title of the cheat sheet.

Fixed it for you pic.twitter.com/Qd66thecbK

Another created a new version that depicted Biden in various unflattering moments, including his embarrassing multi-trip incident while ascending the stairs to Air Force One.

Others panned the idea of introducing Biden administration talking points during Thanksgiving dinner.

Don’t do this, folks. Regardless of your uncles politics. Life is too short and we have too little time with our loved ones as it is. Try gently changing the subject. Talk about your kids and their activities. Your hobbies. Family members who’ve passed. Share stories.

Good Lord, why would anyone use any kind of talking points, let alone from the WH with family and friends. Do people not have their own thoughts. On top of which there are so many other things to laugh and joke about with family 🤦‍♀️

Or, better yet, don’t talk about politics at Thanksgiving at all, and instead just enjoy being with your family and/or friends regardless of what their views are about anything other than the turkey, stuffing, and pumpkin pie!

“Imagining someone taking out their phone at the dinner table to read from their libtard pamphlet,” one Twitter user wrote.

While Klain and other White House staff would love nothing more than for liberal Biden voters to correct their mean Republican relatives at the dinner table, they failed to mention that a recent survey from Personal Capital indicated that one in four Americans will be forced to skip the traditional holiday meal this year.

Why? They literally can’t afford it. And that’s incredibly sad and unfortunate, to say the least.

Unfortunately, the White House doesn’t seem to care about them as it trumpets its “accomplishments.”

Ryan Ledendecker is a freelance journalist and writer. He began reporting news and writing commentary during the 2014 Ferguson riots. Prior to that, he worked as a web editor and columnist for an award-winning local newspaper.

Ryan Ledendecker is a freelance writer covering politics and breaking news. He previously worked as a columnist and web editor for an award-winning local newspaper. When he's not writing, he's honing his competitive BBQ skills. You can find him on Twitter, Facebook, and Truth Social.