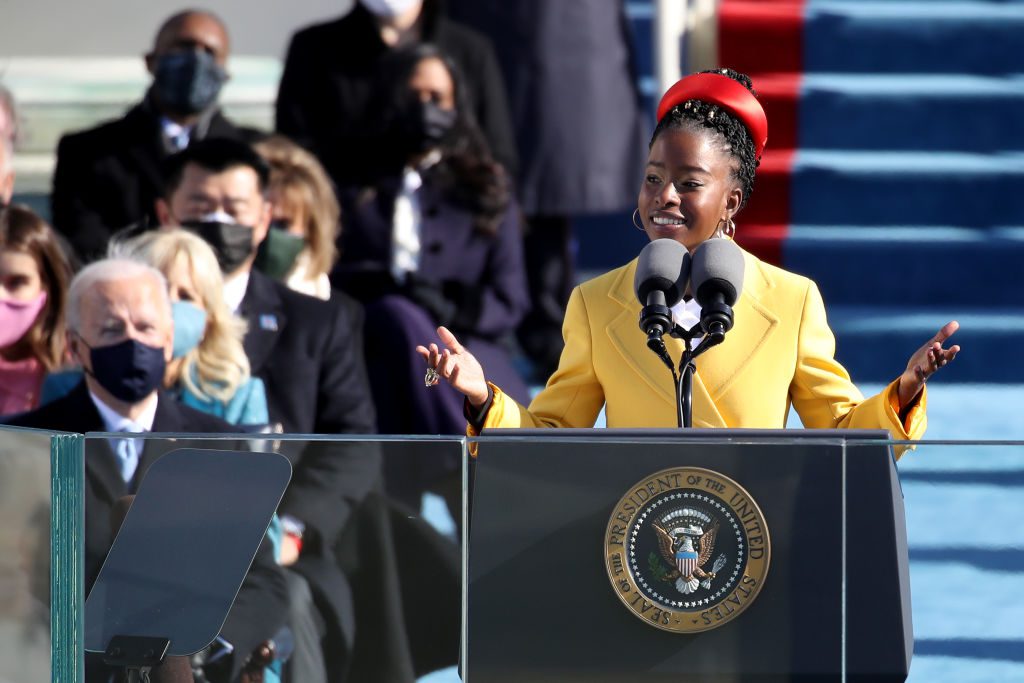 Youth Poet Laureate Amanda Gorman speaks during the inauguration of U.S. President-elect Joe Biden on the West Front of the U.S. Capitol on January 20, 2021 in Washington, DC. (Photo by Rob Carr/Getty Images)

Read this with me:

The land was ours before we were the land’s.

She was our land more than a hundred years

Before we were her people. She was ours

In Massachusetts, in Virginia,

But we were England’s, still colonials,

Possessing what we still were unpossessed by,

Possessed by what we now no more possessed.

Something we were withholding made us weak

Until we found out that it was ourselves

We were withholding from our land of living,

And forthwith found salvation in surrender.

Such as we were we gave ourselves outright

(The deed of gift was many deeds of war)

To the land vaguely realizing westward,

It’s beautiful. Robert Frost read it at John F. Kennedy’s inauguration in 1961. He’d written a different poem for the occasion, but with the sun in his aged eyes, the 86-year-old Frost couldn’t read “A Dedication” off the paper he held. So he recited “The Gift Outright” instead. I’m glad. It’s a wonderful poem.

Frost’s precise iambic pentameter flows almost conversationally, broken only by a few strategically placed feminine endings, the extra syllable suggesting the open frontier and the unfinished country. His language of possessing and being possessed, of the irrevocable gift of an imperfect and ever-changing self to an imperfect and ever-changing partner, suggests marriage. Americans rhapsodizing about their country’s founding tend to evoke a bloodless liberalism that portrays our country as a set of free-floating ideas. Frost shows us a better way. We didn’t conjure up America like a castle in the air; we married ourselves to her, for better or for worse.

It’s true that, as one of my old grad school professors points out, the poem delivers “a Eurocentric, colonialist message,” as if there weren’t already people living in the “unstoried” West. But Frost set out to tell an American story, not the American story, though I see no reason why an African American or a more recent immigrant couldn’t “marry into” this narrative. Frost was under no obligation to expand his “we” beyond the descendants of white colonists. It’s never wise to fault a work of art for failing to do something that it never attempted to do.

Much of the criticism of “The Hill We Climb,” the poem that 22-year-old Amanda Gorman recited at Joe Biden’s inauguration, falls into this category. By quoting Frost at the beginning of this article, I’m sure I led several of my readers to assume that the thesis of my piece would be “old white man poet good, young black woman poet bad.” I’m sorry to disappoint.

My old professor praised Gorman’s poem to the skies, while Melanie McDonagh of The Spectator and Malcolm Salovaara of TAC savaged it. I’m somewhere in the middle. The slam-poetry style of “The Hill We Climb,” with its hip-hop and black homiletic influences, isn’t my favorite, but I prefer it to the lame prosiness of much contemporary poetry. Gorman’s piece at least benefits from being read aloud, like Homer and Shakespeare, as opposed to sitting there dead on the page.

There’s plenty to criticize. The poem employs platitudes like “author a new chapter” and “leave behind a country better than the one we were left” that Gorman seems to have copy/pasted in as filler. And the line “our people, diverse and beautiful, will emerge / battered and beautiful” repeats a word to no apparent effect, giving the impression that Gorman simply couldn’t think of another one.

But “The Hill We Climb” has its moments. Here’s one:

“Because being American is more than a pride we inherit. / It’s the past we step into and how we repair it.”

This is a controversial statement, encompassing all the toppled statues and reparations debates and dueling historical projects that have polarized the country. And yet Gorman manages to express it in positive, unifying, even inspiring terms. Why should the shared project of repairing a past that is self-evidently imperfect and that obviously continues to affect the present be a divisive issue? She, like Frost, gives us a fresh perspective on what it means to be an American that’s both rousing and hard to disagree with.

By ceding such imaginative engagement to the left, Republicans make a grave mistake.

Amanda Gorman is the sixth poet to read at a presidential inauguration. Frost read for Kennedy, Maya Angelou and Miller Williams for Bill Clinton, and Elizabeth Alexander and Richard Blanco for Obama. No Republican president has ever had a poem read at his inauguration.

Why not? One explanation could be because all poets are lefties. And why is that? In a 2008 blog post, poet Lucia Perillo offered a brilliant answer: conservatives are dumb and mean. Or, as she put it, “anyone who thinks long and seriously will be led to liberal conclusions” and “poets are, by nature, compassionate.”

That’s plainly not true. Left-leaning poets are perfectly capable of being fools or bastards. Many are both. But by refusing to challenge that narrative, conservatives play into Perillo’s narrative, tacitly admitting that the Democratic Party is the sole abode of truth, goodness, and light.

It’s bad for the country because it makes empathy and intelligence into partisan issues.

It’s bad for poetry because, as Perillo acknowledges, it “undermines the (naïve?) hope that some poets harbor about the value of poetry in the social commons.” The success of a poem called “Fuck Your Lecture on Craft, My People Are Dying” make it clear that poetry has become an activist discipline, and only one brand of activism is welcome.

It’s bad for Republicans because it renders their politics prosy. If you have trouble imagining what a poem read at Trump’s inauguration would sound like, maybe it’s because there’s something lacking in Trump. People respond to poetry. Virgil didn’t care what really happened on the plains of Troy in 12th century BC. He picked up the Iliad and ran with it, and Romans forever after knew themselves to be Trojans. A political vision that cannot be expressed in poetry is a political vision in need of revision.

And where is it written that only left-wing visions can find their expression in poetry? Rudyard Kipling was the bard of colonial empire. Roy Campbell wrote pro-Franco verse. T.S. Eliot claimed that no one understood his Four Quartets better than Russell Kirk.

Nor would every published poet in America close ranks and refuse the invitation to read at a Republican inauguration. As a friend pointed out to me, the conservative journals First Things, The New Criterion, and Modern Age all publish poetry. The friend who pointed this out, Michael Shindler, is himself both a conservative and a fine poet. If I’m ever elected president, he’ll be on my shortlist.

Surely, if all else failed, George W. Bush could have called up Dana Gioia. An accomplished poet who voted for Dubya and served as his chairman of the National Endowment for the Arts would hardly have objected to writing a few stanzas for the inauguration.

I don’t pretend that having a poet read for the next Republican president would bring about some sort of political revolution. As with previous inauguration pieces, the poem would likely strike an optimistic tone while steering wide of controversy. People would listen politely and then forget all about it.

But at the same time, it might be four years before many of them hear another poem read. Their only experience of poetry is in the context of politics, specifically left-liberal politics. Such one-sidedness inevitably shapes Americans’ perception of what poetry is, what politics is, and how the two relate. A poem for a GOP inauguration might not change anyone’s mind on policy issues, but it could, like Gorman’s great couplet on repairing the past, invite a more charitable interpretation of opposing views.

If conservatives want to stop being perceived as—or, worse, being—the party of prose, at best dull and at worst pure evil, then inviting a poet to read at the next Republican inauguration would be a good start.

Grayson Quay is a freelance writer and M.A. at Georgetown University.