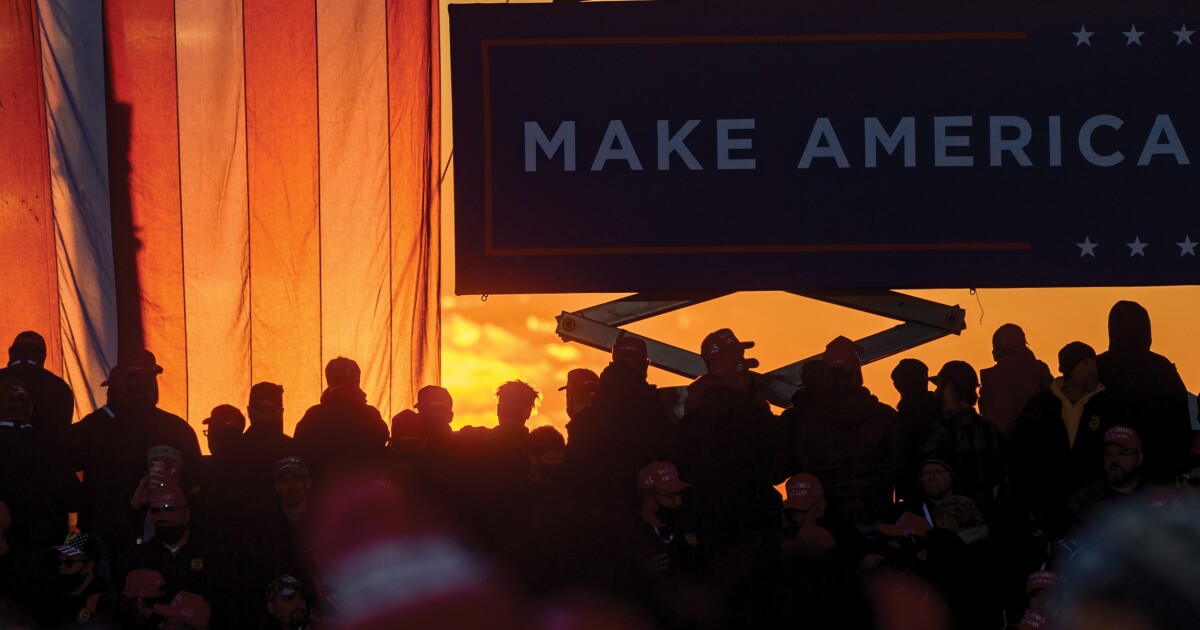 The 74 million men and women who voted for Donald Trump had thousands of different reasons for their votes and fit a million different demographic profiles. But the most important voter to Trump was the one who had no interest in politics before 2015 and would not have otherwise gone to the polls. This was the alienated voter.

To be sure, plenty of PTA presidents have flown Trump flags, and hundreds of Knights of Columbus leaders have donned MAGA hats. But the marginal Trump voter in 2016, and again in 2020, was mired in a world of disconnection.

This was the political thesis behind my 2019 book, Alienated America. Social disconnection, the collapse of community, and the deinstitutionalization of American life that gave us many maladies, such as the opioid crisis and declining marriage rates, also gave us Trump.

That was true in 2016, especially in the Republican primaries. Overlooked in the fact that Trump lost reelection is that it was even more true in 2020.

Trump this year improved his performance in places characterized by alienation and underperformed in places marked by strong community cohesion. Trump’s biggest declines were in wealthy white suburbia, where Little Leagues and PTAs are bursting at the seams, and (more interestingly) certain tightly knit, conservative small towns and rural counties are built around robust churches.

Put another way: In places where people see the American Dream is alive, even Republicans and Christian conservatives moved further away from Trump. Where people see it is dead, they embraced Trump even more fully.

“The share of Americans who are more socially disconnected from society is on the rise,” as pollster Dan Cox puts it, “and these voters disproportionately support Trump.”

This isn’t mere trivia. Trump’s connection to and reliance on alienated America indicate real problems — for pollsters, for Republicans, and for American culture as a whole.

The places that gave us Trump

Donald Trump announced his candidacy in 2015 by declaring, “The American Dream is dead.” He proceeded to win the Republican nomination by dominating in the places where the American Dream appeared most dead.

Consider Michigan: Trump won almost every county in the Republican primary, but he lost the parts of western Michigan around Holland and Grand Rapids. The weird correlation I discerned from this result was that Ted Cruz dominated in the counties with high Dutch populations. This held up in Iowa and Wisconsin, too.

This wasn’t Dutch folk punishing Trump for appropriating the color orange. It wasn’t some windmill thing either. If you want to know why Trump did so poorly in the 2016 primaries in conservative rural places such as Holland, Michigan, and Orange City, Iowa, look at the churches — there are a lot of them, and they’re full.

Rural America’s strongest communities, the places that best fend off maladies such as dropouts and opioids, are built around churches. The Christian Reformed Church and the Reformed Church in America specifically have proven masterful at building tight-knit communities. These two denominations come down from Dutch settlers in the Calvinist reformed tradition.

They build strong communities that are very conservative but marginally less Trumpy. Recall that it was Orange City, Iowa, that tossed out Steve King in the Republican Party after a string of racist remarks and vociferously anti-immigration actions.

And while Trump did well among Christians of all stripes, it turns out the more a Christian attended church, the less likely he or she was to support Trump in the primaries.

Churchgoing is one facet of the relevant factor in predicting Trump support: social connection.

“Social capital,” wrote UCLA scholars Paola Giuliano and Romain Wacziarg in an August 2020 study, “measured either by the density of memberships in civic, religious and sports organizations or by generalized trust, is significantly negatively correlated with the vote share and favorability rating of Donald Trump.”

The scholars compared a county’s social capital — how many people volunteer, how many organizations or churches there are, how much people trust their neighbors, etc. — to the 2016 Trump vote. They found that lower social capital meant more Trump support, especially in the Republican primaries. This study controlled for “education, population density, unemployment, manufacturing employment share, income and racial composition,” the researchers explained.

In other words: Given two different counties with the same demographics and economics, the one with weaker or fewer community institutions was more likely to support Trump.

In the 2016 general election, the effect was muted compared to the primaries but still detectable. Yes, when the alternative was Hillary Clinton, millions of ordinary Republicans and right-leaning independents pulled the Trump lever, as did the vast majority of churchgoing folks of Holland and Orange City. Nevertheless, you could see in election results the effects of alienation and connection: Trump did worse than Mitt Romney had in the more connected places, whether they be wealthy suburbs or conservative religious communities. He surpassed Romney in the alienated places.

These correlations could imply the causality was economic. But it wasn’t. It was social. Where communities were suffering, people voted for the outsider who said the American Dream was dead and who, as elites heralded the past few decades' changes, declared that something really valuable was lost in the upheaval.

A wondrous accomplishment of Trump's was that he managed to remain an “outsider” throughout his full four years as president. It helped that he was abused by the media, academia, career bureaucrats, Congress, Hollywood, and Big Tech because it intensified his very specific appeal to the alienated voter. The election map from 2020 shows this.

Returning to Michigan: Joe Biden outperformed Clinton in the connected places: the educated, wealthy suburbs as well as the churchgoing Dutch places.

The counties with the largest Democratic gains in 2020, percentagewise, included those with the most bachelor's degrees: Washtenaw (where Ann Arbor is), Oakland, and Leelanau. Democrats also gained big in all three western Michigan counties where Dutch is the leading ethnicity. In Ottawa County, home to Holland, Trump won by about 36,000 votes, vastly underperforming conservative Senate candidate John James, who won the county by nearly 47,000 votes.

That is, according to this study, this is the part of Michigan with the sparsest or weakest churches, PTAs, bowling leagues, and so on. Barack Obama beat Romney in Lake County in 2012. Trump won Lake County with 59% in 2016. Trump climbed to 63% there this year.

Incisive polling by the Survey Center on American Life confirmed that, on the individual level, the alienated looked to Trump this year. “There was a large swing to Trump among white voters who had low levels of social trust,” wrote pollster Dan Cox of the American Enterprise Institute.

“Biden was heavily favored by registered voters with larger social networks (53 percent to 37 percent),” Cox explained, “but it was Trump who had the edge among voters without any close social contacts (45 percent to 39 percent).”

This wasn’t a question of pure economics or education, Cox explained. The alienation-Trump support correlation holds up “even after accounting for differences in income, education level, and racial attitudes. Sixty percent of white voters without anyone in their immediate social network favored Trump, compared to less than half (46 percent) of white voters with more robust social ties.”

Cox was interested in this phenomenon partly to explain the polling errors. “There was a large swing to Trump among white voters who had low levels of social trust,” Cox writes, “a group that researchers have found is also less likely to participate in telephone surveys.”

That means pollsters, however much they control for education, race, age, sex, and region, will disproportionately be missing Trump voters. That makes polling hard.

Republicans have an even bigger problem than pollsters do. The growth of alienated America made Trump the candidate for the times, but it means other Republicans will have a hard time piecing together a winning coalition. After all, Trump is unique. He was a true outsider’s outsider, and his burn-it-all-down message resonated. No normal politician, however populist he tries to sound, will have the appeal of this brash, vulgar television celebrity.

If Republicans need the alienated voter in order to win nationally (or statewide in Michigan, Pennsylvania, and Wisconsin), they might be out of luck once Trump is gone.

Finally, there’s the broader national problem: This alienation is corrosive to American life.

Trump supporters and detractors sometimes hear this as a condemnation of the core Trump voter — these are fake Christians because they don’t go to church or these people replace community or religion with Trump.

Such blame-placing or judgment is uncharitable and probably wrong. It’s best to look at it this way: American life is increasingly alienating, especially outside of wealthy, educated bubbles, and this alienation drives people to want to tear down the whole system.

“Nearly one in five Americans (17 percent) reported having no one they were close with,” Cox found. That’s 55 million totally isolated people out there. That’s kindling for drug abuse, radicalization, and social decay.

Donald Trump didn’t cause the alienation, nor did he fix it. Through his unpredictable electoral success, though, he brought this dark phenomenon to light.

Timothy P. Carney is the senior political columnist at the Washington Examiner and a resident fellow at the American Enterprise Institute. He is the author of Alienated America: Why Some Places Thrive While Others Collapse.