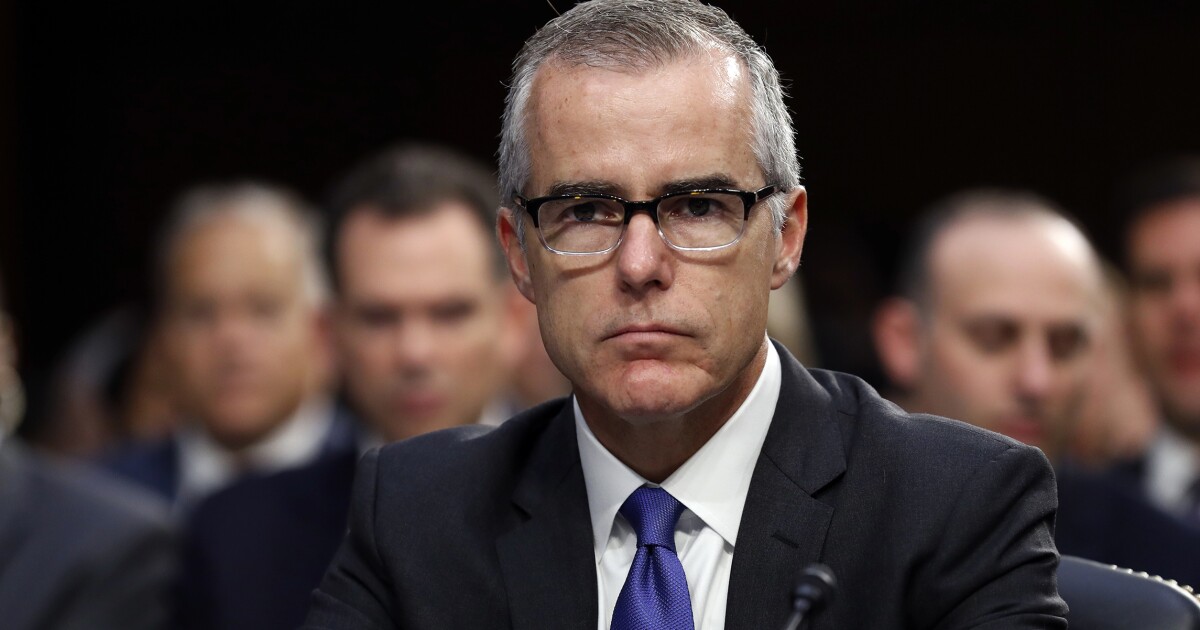 McCabe, who rose up the FBI ranks after joining the bureau in the mid-1990s and helped lead the FBI’s Trump-Russia team as FBI Director James Comey’s deputy, also testified that he wouldn’t have signed the June 2017 renewal if he knew then what he knows now during testimony before Senate Judiciary Chairman Lindsey Graham’s committee on Tuesday.

“If you knew then what you know now, would you have signed the warrant application in June 2017 against Carter Page?” Graham asked.

Graham’s committee has already received testimony from former deputy attorneys general Rod Rosenstein and Sally Yates this year, both of whom also said they would not have signed off on the FISA warrants against Page if they knew then what they knew at the present. Comey testified in September that he would not have signed off on the FISA applications without a “much fuller” discussion about what was being presented to the FISA court. McCabe approved the fourth and final FISA warrant for the FBI in June 2017 after Comey was fired that May.

DOJ Inspector General Michael Horowitz’s lengthy December report criticized the DOJ and the FBI for at least 17 “significant errors and omissions” related to the FISA warrants against Page and for the bureau's reliance on British ex-spy Christopher Steele’s discredited and Democrat-funded dossier. Declassified footnotes showed that the FBI was aware that Steele’s dossier might have been compromised by Russian disinformation.

“I was shocked and disappointed at the errors and mistakes that the OIG found. To me, any material misrepresentation or error in a FISA application is unacceptable. Period,” McCabe said in his opening statement.

McCabe and Comey pushed to include allegations from Steele’s dossier in the 2017 Intelligence Community Assessment,” according to Horowitz's report. The dossier was summarized in a classified appendix to the Russia meddling assessment.

Graham asked if he was aware that the CIA had dismissed some of Steele’s claims as “internet rumor.”

“I did not know that at the time, and I don’t know that now,” McCabe claimed.

Horowitz’s December report said FBI interviews with Steele's main source, revealed to be U.S.-based and Russian-trained lawyer Igor Danchenko, “raised significant questions about the reliability of the Steele election reporting” and cast doubt on some of its biggest claims.

FBI notes of an interview conducted with Danchenko in early 2017 show he told the bureau that he didn't know where some of the dossier claims attributed to him came from and that his Russian sources never mentioned some of the allegations. Steele’s source told the FBI that Steele mischaracterized at least one of his own Russian source contacts too. Danchenko noted that much of what he gave to Steele was “word of mouth and hearsay,” some stemmed from a “conversation that [he] had with friends over beers,” and the most salacious Trump allegations may have been made in “jest.”

Graham asked if McCabe was aware of the FBI’s interviews with Danchenko in January and March of 2017, to which the former FBI official said he was. aware. Graham asked if he was told about the “substance” of the interviews, and McCabe said, “Not in detail.” Graham also listed out a host of details the bureau learned from Steele’s main source and asked McCabe if any of that was ever communicated to him. McCabe said, “Not that I can recall.”

McCabe also told Graham that he didn’t know that the CIA had told the FBI in August 2016 that Page had previously been approved as an “operational contact” for the agency.

U.S. Attorney John Durham was tasked by Attorney General William Barr in the spring of 2019 to examine misconduct by federal law enforcement and intelligence officials surrounding the FBI's Trump-Russia investigation. That review later turned into a criminal inquiry, which so far has led to one guilty plea, with former FBI lawyer Kevin Clinesmith admitting he fraudulently changed the wording of a CIA email to say that Page was “not a source” for the agency.

Graham asked whether McCabe had misled the FISA court. McCabe admitted that he had “signed a package that included numerous factual errors or failed to include information that should’ve been brought to the court.” When asked what should be done to him and others at the FBI, McCabe said that “I think our efforts should be focused on figuring out how these errors took place and ensuring that they don’t happen again.” Graham retorted that “that starts with those who committed the problem being held accountable.”

Horowitz released a separate report in 2018 detailing multiple instances in which McCabe “lacked candor” with Comey, FBI investigators, and inspector general investigators about his authorization to leak sensitive information to the Wall Street Journal that revealed the existence of an FBI investigation into the Clinton Foundation. Then-Attorney General Jeff Sessions fired McCabe in March 2018.

The Justice Department declined to press charges against McCabe in February, and a federal judge ruled in September that McCabe’s wrongful termination lawsuit could move toward discovery.