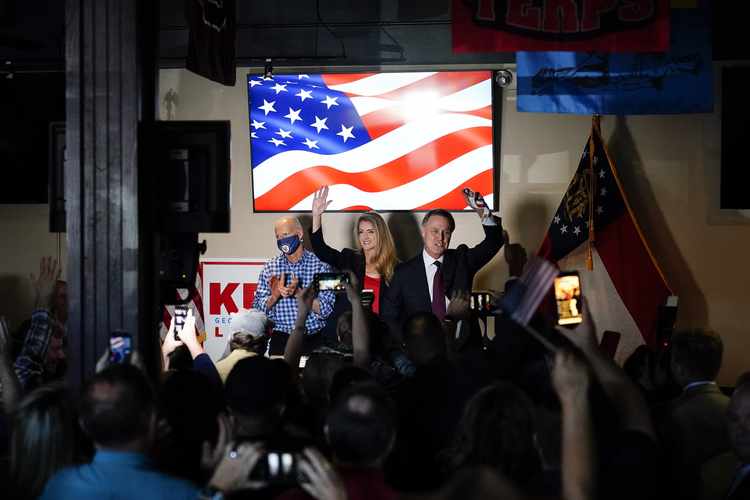 Control of the Senate is going to come down to two Jan. 5 runoffs in Georgia. Sen. David Perdue came a hair’s breadth from winning his race against Jon Ossoff outright, but ultimately fell just short of 50% plus one. Sen. Kelly Loeffler will face off against the Rev. Raphael Warnock to complete the term of former Sen. Johnny Isakson (the reward for the winner is running again in two years for the full term).

Somewhat surprisingly, articles discussing these races have framed the races to claim that Republicans are favored in both. Politico declares that Democrats begin behind the eight ball, while other pieces casually cast Republicans as “likely” or “probable” victors in the Peach State.

I’m not sure that is correct, and would view these races as pure tossups from the start. Here are six reasons why.

1. Biden just barely won the state, and it may not revert to “factory settings.” Any analysis of the Georgia runoffs needs to start with this observation: Joe Biden just won the state. There are obviously enough votes today for a Democrat to win a Senate seat (something that hasn’t been true for two decades). One would think that fact would dominate analysis of these races: All Democrats have to do is turn out their own voters one last time.

Why would analysts overlook this? There is likely a sense that Donald Trump is an aberration, and that the parties will revert to their pre-Trump orientation once he exits the stage. Even if we make the seemingly gratuitous assumption that Trump will have quietly left the stage by January, this overlooks the fact that the changes we’ve seen under his administration are the culmination of trends within the parties dating back over a decade. As I wrote in 2012:

“While I find it highly unlikely that [Rick Santorum will] be the nominee this time out, there’s a good chance that the Republican coalition will fundamentally change in the next 20 years and move toward Santorum’s style of politics. Twice in a row now, the party has toyed with nominating a candidate who combined social conservatism with economic populism; Santorum’s speech last night was essentially a northern version of a speech Mike Huckabee could have delivered in 2008.

“We’ve already seen white working-class voters move toward the Republican Party over the past several decades — a shift perhaps epitomized by the GOP’s special election victory in New York’s 9th Congressional District. If a more credible Santorum/Huckabee candidate could emerge, the party would reciprocate by moving toward these voters. This would have major implications for our political dynamic, and could deal the Democrats a serious blow in states like Pennsylvania and Ohio.

“On the other hand, the Democrats have been moving toward a top-bottom coalition of ‘New Economy’ professionals and minority voters. A Santorum/Huckabee-esque Republican Party would probably hasten the exit of upscale suburbanites from the Republican coalition, and potentially reinvigorate the New Democrat approach to governing that dominated the party’s politics in the ’90s.”

There may be some mean reversion for Democrats among whites with a college degree in the post-Trump GOP, but it is unlikely that it will be a complete backslide. Of course, American politics can’t be explained entirely by white educational attainment. Race, religion, and religiosity all play roles in explaining vote patterns. But given Atlanta’s emergence as a major “knowledge economy” hub, it is difficult to dismiss these changes.

2. The Democrats’ coalition is different than those in previous runoffs. Part of what fuels media skepticism about Democrats’ chances in these races is the outcome of previous runoff elections, where Democrats have made the postseason in good condition, only to lose in the end.  The most prominent example of this is the Georgia race between Democrat Wyche Fowler and Republican Paul Coverdell in 1992, where Fowler (like Perdue) almost cleared 50% on Election Day, but fell short in the final count. In 2008, Jim Martin forced a runoff with Saxby Chambliss after keeping the race within three percentage points in November; Chambliss won the runoff by 15.

But this might tell us more about the nature of the parties’ old coalitions than anything else. Runoff elections are typically low-turnout events, and when the Democratic coalition in Georgia consisted largely of whites without college degrees and blacks, they were placed at a disadvantage in an election where high-propensity voters dominated.

As the previous point emphasized, that might not be the case anymore. Republicans may find their turnout efforts hamstrung if whites with college degrees in metro Atlanta turn out in force – as they have in past runoffs – but instead vote Democratic this time.

3. Trump voters may be dispirited.  On top of this, there is likely still something of a difference between a “Trump voter” and a “Republican voter.” In many ways this is similar to a struggle that Democrats faced in the late aughts and early ’10s – there was a small difference between an Obama voter and a Democrat, and that caused them headaches throughout his administration. It probably contributed to the drop in Democratic performance in the 2008 runoff.

4. Trump might go nuclear on Republicans. I find this less likely than I did on Election Day, but there is still a chance that the president may decide to take out some of his anger on Republicans for not supporting him enough in his legal battles. Since I suspect, at least at this point, that Trump will want to run again in 2024, he probably doesn’t want to antagonize rank-and-file Republicans any more than he has too, and at the very least would want to return to office with as many Republicans as possible in the Congress. Still, Trump is nothing if not unpredictable, so the chance remains.

5. Warnock and Ossoff complement each other. Had only Warnock or Ossoff advanced to the runoff, I would probably view the election differently. As it stands, with both of them advancing and able to motivate different portions of the Democratic coalition, they likely enhance the others’ chances. Ossoff’s appeal is rooted in the new, upscale Democratic coalition; he may serve to keep these voters in the Democratic fold.

On the other hand, Democrats’ runoff problems have often been a function of a lack of black enthusiasm. That seems unlikely to be the case this time. Warnock is now close to becoming the first African American senator from Georgia, and his stewardship of Martin Luther King’s A.M.E. church will doubtless be played up in the runoff. Combined, the two of them work hand-in-glove against the traditional decline in Democratic turnout in runoffs in a way that very few other candidates would.

6. Loeffler and Perdue aren’t great candidates. On top of all this, Perdue is a senator who had never before held office and who struggled to win election in what was then still a red state amid a Republican mini-wave. Loeffler is an appointee. Neither has the natural political chops that are developed after years of winning lower profile state representative and congressional races.  They’ve struggled with message discipline and poor choices, and again, they don’t have much room for error.

This isn’t to say that Democrats are the favorites, either. They also have no room for slippage; whites with college degrees may return to the Republican fold; and Democrats may have experienced the defeat of Trump as a cathartic event. Warnock in particular has baggage as a candidate. But the actual evidence that Republicans start out as favorites seems lacking, and we shouldn’t be at all surprised if Democrats win one or both of these races.