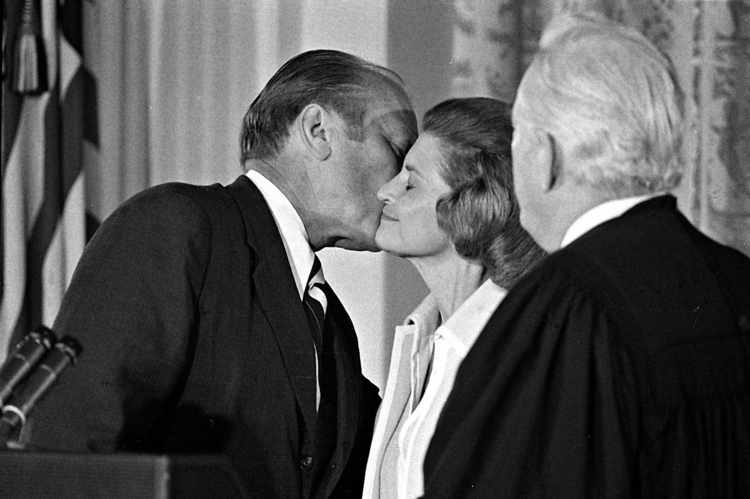 The new president promised to be “president of all the people” and to consult the views of all Americans. “We cannot stand still or go backwards,” he said. “We must go forward together.”

Much of what this president said, including a pledge to work with U.S. allies in the cause of peace, foreshadowed Joseph R. Biden Jr.’s remarks on Nov. 7 after learning he had been elected president of the United States:

The new president was Gerald R. Ford, speaking to the American people after he had taken the oath of office on Aug. 9, 1974. A longtime Republican leader in the House of Representatives, Ford replaced Richard Nixon, who had resigned the presidency in the face of the widening Watergate scandal.

Ford had served eight months as vice president in replacement of Spiro Agnew, who had stepped down because he was under investigation for bribery. Biden spoke after being declared victor over President Donald Trump following one of the most vitriolic election campaigns of modern times.

Although the context of the two speeches differed, the tonality and purpose was much the same. Ford was striving to heal a nation torn apart by a long Watergate investigation conducted against the backdrop of an unpopular war still raging in Vietnam.

Biden will try to be president of all the people, as he has often said, in a nation sharply divided along political and cultural fault lines. Writing in National Journal, journalist Tom DeFrank, who covered the Ford presidency for Newsweek, observed that healing was a mantra for Ford and is again for Biden.

Ford titled his autobiography “A Time to Heal.”

“This is the time to heal America,” Biden said.

History professor Laura Kalman of the University of California, Santa Barbara, who has written about Ford and his pardon of Nixon, said Biden may face the tougher task. “It’s much more partisan now than in Ford’s day,” Kalman told me.

She’s right. Echoing Trump’s unverified claims, a Monmouth University poll found that 77% of the president’s supporters believe that Biden won the election due to fraud.

But Ford faced an enormous obstacle, as he observed in his inauguration speech, because he was an un-elected president. This, and his choice of Nelson Rockefeller as his vice president, fueled a backlash on the right that culminated in the near-miss challenge to his presidential nomination by Ronald Reagan.

That came later. At the time of his inauguration Ford was aware, as Biden is now, that his predecessor had lied to the American people and that truth-telling was necessary for the successful functioning of democracy.

“I believe that truth is the glue that holds government together, not only our government but civilization itself,” Ford said. “That bond, though strained, is unbroken at home and abroad.”

Ford was also a deal-maker, used to reaching across the partisan aisle.

“Like Ford, the president-elect isn’t known for holding grudges, preferring pragmatism to payback,” DeFrank wrote. “While he surely won’t pardon Trump, he may also not go out of his way to use his Justice Department to go after the former president or political rivals, either.”

I was a young reporter for The Washington Post when Ford became president, and I remember feeling that a dark cloud that had hovered over the White House for many months had lifted, allowing us to see the sunlit countryside beyond.

In those first weeks, before the Nixon pardon plunged the nation into renewed political turmoil, Ford’s ordinary behavior struck a resonant national chord. He made his own breakfast, instructed bands to play the Michigan fight song rather than “Hail to the Chief,” and made no objection when old friends called him “Jerry” rather than “Mr. President.”

This couldn’t last, and it didn’t, but in a short space of time Ford restored normalcy to Washington so effortlessly that he received scant credit for what may have been his greatest achievement.

“My fellow Americans, our long national nightmare is over,” Ford said in the most famous sentence of his inaugural speech. I’m not sure we’re there yet in 2020, but we do seem to be rousing slowly from what for many of us has been a very bad dream.

Lou Cannon is editorial adviser and columnist for State Net Capitol Journal, a Lexis-Nexis publication. He previously worked for The Washington Post and is author of “President Reagan: The Role of a Lifetime.”

Russia Accuses US Of ‘Direct’ Involvement In War As Pentagon Ramps...