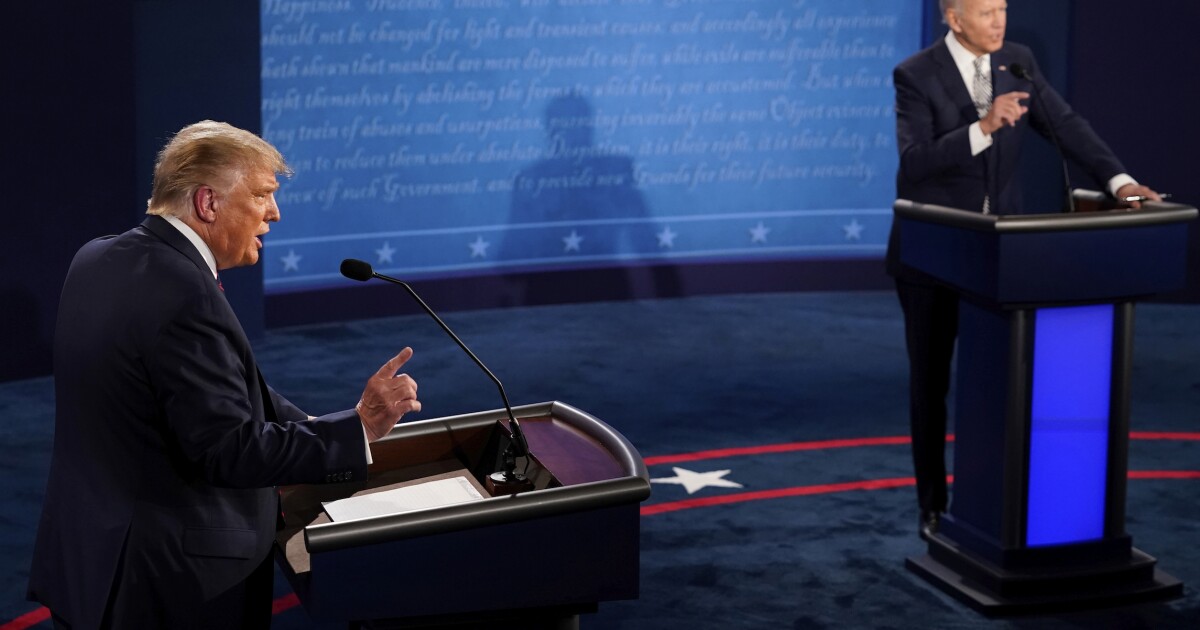 Former Vice President Joe Biden is not receiving a presidential daily briefing nor is his transition team in contact with the Office of the Director of National Intelligence despite the Democrat’s apparent victory over President Trump.

The reason for that, the office for Trump's spy chief says, is because the General Services Administration has not yet ascertained that Biden is the president-elect.

Emily Murphy, the administrator of the GSA since 2017, has not yet formally confirmed that Biden has defeated Trump, and the intelligence community said that it would follow the GSA’s lead, as it believes the law requires. Many media outlets, ranging from the Associated Press to Fox News, called the race for Biden on Saturday.

“ODNI follows the statutory direction provided in the Presidential Transition Act, which requires ascertainment of the candidate by the administrator of GSA prior to supporting a potential presidential transition,” an ODNI spokesman told the Washington Examiner. “ODNI would not have contact with any transition team until notified by the GSA Administrator.”

As a major-party candidate, Biden had been receiving periodic intelligence briefings, but he has not yet been given access to the PDB, a daily summary of the intelligence community's high-level analysis on national security threats that has existed since 1946.

“Obviously, the PDB would be useful, but it’s not necessary. I’m not the sitting president now,” Biden said during a Tuesday press conference, adding that “access to classified information is useful, but I’m not in a position to make any decisions on those issues anyway. As I said, one president at a time, and he will be president until Jan. 20. It would be nice to have it, but it’s not critical.”

“There are no updates at this time and GSA’s position remains the same. An ascertainment has not yet been made,” a GSA spokesman told the Washington Examiner on Tuesday. “GSA and its Administrator will continue to abide by, and fulfill, all requirements under the law and adhere to prior precedent established by the Clinton Administration in 2000.”

According to a Congressional Research Service report, former President Bill Clinton’s White House chief of staff, John Podesta, issued a Nov. 13, 2000, memo stating that “because of the uncertainty over election results, no President-elect has been identified to receive federal funds and assistance under the Presidential Transition Act of 1963.” Even after the Florida vote was certified in then-Gov. George W. Bush’s favor over then-Vice President Al Gore on Nov. 26, then-GSA Administrator David Barram still announced that the results were “unclear and un-apparent.” It was only after Gore’s defeat at the Supreme Court and his concession speech on Dec. 13 that Barram authorized Bush’s use of federal transition funds.

John Helgerson, a former career CIA officer, wrote Getting to Know The President: Intelligence Briefings of Presidential Candidates, 1952-2004, in which he explained that “within a few days of the election, presidents-elect customarily have chosen to begin receiving daily intelligence briefings.” But he said that Clinton didn't allow Bush access to the PDB until three weeks after the election.

“Clinton ultimately approved briefings for Bush even before the Supreme Court resolved the election. The CIA was surprised to get the word indirectly, when White House Chief of Staff John Podesta on 30 November announced the president’s decision on the Today show,” Helgerson wrote. “The following day, [CIA analyst Jami] Miscik met with the Secret Service to coordinate access to Governor Bush, and on Sunday, 3 December, with the governor’s future chief of staff, Andy Card… [CIA senior analyst Winston] Wiley provided the first briefing, on 5 December at the Governor’s Mansion.”

The 9/11 Commission Report concluded that “the dispute over the election and the 36-day delay cut in half the normal transition period” and “this loss of time hampered the new administration in identifying, recruiting, clearing, and obtaining Senate confirmation of key appointees.”

Biden's team is moving ahead with transition planning, including putting together transition teams and speaking to foreign leaders, but has called on Murphy to affirm that the Democrat won the election.

“Now that the election has been independently called for Joe Biden, we look forward to the GSA Administrator quickly ascertaining Joe Biden and Kamala Harris as the President-elect and Vice President-elect,” a Biden transition spokesman said in a statement over the weekend. “America’s national security and economic interests depend on the federal government signaling clearly and swiftly that the United States government will respect the will of the American people and engage in a smooth and peaceful transfer of power.”

Senate Republicans criticized how the GSA in the waning days of the Obama administration and in the early days of the Trump presidency handled the transition period.

A Biden transition official suggested the former vice president may use the courts to pressure the GSA to recognize his apparent victory, but Biden said on Tuesday, “I don’t see a need for legal action, quite frankly.” Secretary of State Mike Pompeo quipped on Tuesday that “there will be a smooth transition to a second Trump administration.”

“I just think it’s an embarrassment, quite frankly … I think it will not help the president’s legacy,” Biden said on Tuesday. “But I think at the end of the day, it’s all going to come to fruition on Jan. 20, and between now and then, my hope and expectation is that the American people do know and do understand that there has been a transition.”