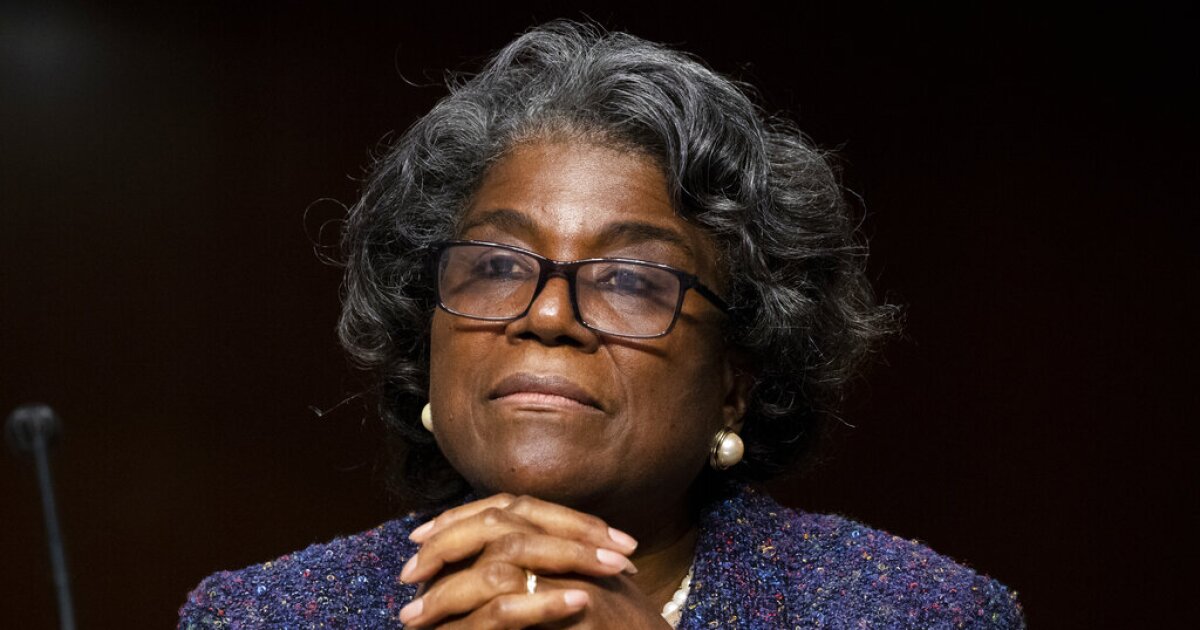 President Biden’s nominee to be ambassador to the United Nations admitted that it was a “huge mistake” for her to deliver a paid speech in 2019 before the Savannah State University branch of the Chinese state-funded Confucius Institute, which the United States considers a soft-power extension of the Chinese Communist Party’s influence efforts.

Linda Thomas-Greenfield, who joined the Foreign Service in 1982 and worked her way up to assistant secretary of state for African affairs during the Obama administration, gave the Savannah speech in October 2019.

Republican Sen. Jim Risch of Idaho, chairman of the Senate Foreign Relations Committee, brought the speech up during Thomas-Greenfield’s confirmation hearing Wednesday, calling it the “elephant in the room.” Democratic Sen. Robert Menendez of New Jersey, the committee’s ranking member, gave her the chance to explain herself.

Savannah State University “is the oldest historically black college and university in Georgia, and it has a goal of encouraging young people, particularly young black and brown Americans who are under-represented in our Foreign Service, to pursue careers,” Thomas-Greenfield said. “I accepted that speech at a request from the university with the idea in mind that this would give me another opportunity to engage with young people.”

She added: “Truthfully, I wish I had not accepted the specific invitation, and I came across from the experience frankly alarmed at the way the Confucius Institutes were engaging with the black community in Georgia. It reminded me of what I’d seen in Africa — the Chinese government going after those in need with fewer resources.”

The 2019 Confucius Institute speech by Thomas-Greenfield, first obtained by the Washington Post, painted a rosy picture of China’s actions in Africa. She said “the conventional wisdom” about China “is not nuanced enough.” Thomas-Greenfield claimed, “Beijing’s motivations are broader and more oriented towards long-term cooperation.” On China’s Belt and Road Initiative, she said that China had pushed “useful investments” on the continent, including “the rollout of critical projects in Africa built by the Chinese” such as major railways, port development, and infrastructure projects. She noted that “China’s engagement with the continent is not just economic, it is cultural.”

Talking about investment, Thomas-Greenfield said the U.S. “should be focused on building a strong partnership with Africa which is based on shared values of peace, prosperity, sustained economic growth and development, and a firm commitment to good governance, gender equity, and the rule of law.” Thomas-Greenfield said she sees “no reason why China cannot share in those values,” adding that “China is in a unique position to spread these ideals given its strong footprint on the continent.”

The diplomat's speech rejected the idea of a U.S.-China Cold War and critiqued U.S. policy. “Those who would criticize Chinese predatory lending or the governments who accept these deals must also acknowledge that, in many cases, the United States and the West is not showing up or offering viable alternatives,” Thomas-Greenfield said. She argued that “in the U.S.-China-Africa relationship, win-win-win cooperation is possible.”

The Pentagon’s annual report in September warned that, through its Belt and Road efforts, “the CCP has signaled this will drive China towards expanding its overseas military footprint to protect those interests” and that the Chinese government could use economic leverage in Africa “to pursue its geopolitical interests.” The State Department warned in November that, in Africa, “the PRC is bent on acquiring vast amounts of the continent’s abundant raw materials and mineral wealth,” and China’s projects in Africa often “burden local economies with heavy debt and other problems.”

“I have a long track record … speaking about China’s malign influence, about the debt trap tactics that they have used in Africa and elsewhere,” she said, adding that “China is a strategic competitor and poses challenges to our security.” She also promised “to counter China at the U.N.” and “to push back on China’s self-interested and parasitic development goals in Africa.”

Republican Sen. Marco Rubio of Florida said he was “a bit puzzled” by Thomas-Greenfield’s explanation for the speech, noting that China's activities were well documented and must have been known by a veteran diplomat.

“I am not naive about China’s malign influence, and I know very well the activities of the Confucius Institute,” Thomas-Greenfield replied, saying she had spoken at the university itself a number of times and said she’d accepted an invitation to speak from the university itself, not directly from the Confucius Institute. “What I was surprised about … when I got there, is that they had activities that went into our high schools, that went into our elementary schools, that I was not aware of. … I had never seen it in person in the United States. I’d seen it in Africa for sure, and, as I said, I truly regret having accepted that nomination and having my name associated with the Confucius Institute.”

Thomas-Greenfield said she was “paid an honorarium” of $1500 “by the university” for the speech, and “the fact that this was associated with the Confucius Institute was truly a huge mistake on my part.”

In August, the State Department designated the Confucius Institute U.S. Center in Washington, D.C., as a “foreign mission” of the Chinese Communist Party. Under the Trump administration, Secretary of State Mike Pompeo and Education Secretary Betsy DeVos joined forces in October to warn that K-12 classrooms and universities nationwide are being targeted by Chinese Communist Party influence operations.

Amid a squeeze on Chinese influence on campuses by the Trump administration, the Savanna State University’s Confucius Institute announced it had shuttered last year, but touted its partnership with China’s Jiujiang University and how its final enrollment for kindergarten through adulthood classes was more than 1,800 students before its doors closed.

The Senate Permanent Subcommittee on Investigations, led by Republican Sen. Rob Portman of Ohio, released a 109-page bipartisan report in November 2019, concluding foreign countries “seek to exploit America’s openness to advance their own national interests” and “the most aggressive of them has been China.” The subcommittee released an initial report in February 2019, warning about foreign funding and Chinese influence, spurring the Education Department into action.