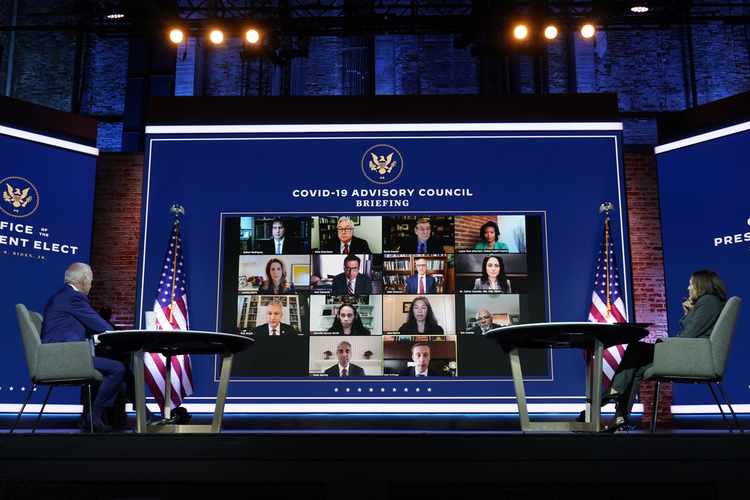 Joe Biden’s latest remarks on his plans to fight the coronavirus pandemic offered signs of just how different his administration may be from Donald Trump’s: It was all scripted substance over style.

Biden’s transition team and Twitter page billed the comments as a major news event updating the country on how “we’re going to beat the virus.” But the former vice president’s buttoned-up appearance made little real news as he stuck to the same themes he hammered home throughout the campaign: wearing masks saves lives, and his administration plans to “follow the science.” Biden also repeated his bleak warning that the U.S. is facing a “very dark winter” ahead with the country registering record-high numbers of infections in recent days.

“It doesn’t matter who you voted for, where you stood before Election Day,” he said, never veering from the speech rolling on the teleprompter. “It doesn’t matter your party, your point of view. We can save thousands of lives if everyone would just wear a mask for the next few months.

“Not Democratic or Republican lives — American lives,” he added.

The election results favoring Biden show that Americans want a return to normalcy and reject the free-wheeling chaos of the Trump era, Democrats argue. But will media access and transparency also fall by the wayside?

Biden left the stage without acknowledging a torrent of queries from reporters. Members of the media and public took to social media to ask exactly how Biden planned to pivot – with the prevailing question focused on whether he would follow Europe’s lead in locking down to stem the increase in COVID-19 cases across the country.

Those questions will have to wait. For now, the transition team appeared intent on providing a visual image of Biden looking forward to next year and addressing the country on the most pressing issue of day. It was a portrait in contrasts as Trump and his team were still look back, waging a legal battle over the election results and refusing to concede.

Earlier Monday, Biden provided a more substantive indication of the changes he has in store. He named a 13-member COVID task force that would advise him during the transition. The panel will include Dr. Rick Bright, a former top vaccine official in the Trump administration who was ousted as the head of a federal medical research agency. Bright had submitted a whistleblower complaint to Congress, arguing that officials in the administration dismissed his warnings about the dire need to acquire masks and other protective supplies in the first months of the pandemic.

The three co-chairs of the advisory board are prominent critics of Trump’s handling of the nation’s coronavirus response: Vivek Murthy, a surgeon general during the Obama administration who was a Biden campaign adviser; David Kessler, a former commissioner of the Food and Drug Administration for Presidents George H.W. Bush and Bill Clinton; and Dr. Marcella Nunez-Smith, a professor of public health at Yale University.

But the naming of panel members and Biden’s speech didn’t carry a single news cycle. The big story of the day — drug maker Pfizer’s announcement that it has developed a highly effective coronavirus vaccine — rekindled the partisan sniping.

The Dow Jones soared 800 points on the news. Members of the current administration and supportive GOP lawmakers credited Operation Warp Speed, Trump’s $18 billion plan to speed development and distribution of a vaccine, for the promising news.

“Great work by the administration pushing the historic and unprecedented vaccine development under Operation Warp Speed, even as cynical Democrats attempted to undermine its credibility,” said Rep. Dan Crenshaw, a Texas Republican and vocal Trump supporter.

Pfizer executives pushed back, initially claiming that the company was never part of the administration’s program. But critics unearthed a press release in which Pfizer boasted that it was part of the Trump push. Others pointed out that the company is on track to receive nearly $2 billion from the administration for vaccine production. The timing of the announced breakthrough, just days after Americans finished casting their ballots, was too much for Team Trump.

“Nothing nefarious about the timing of this all right,” Donald Trump Jr. tweeted sarcastically. He followed up by charging that the pharmaceutical companies deliberately held back on announcing progress in their clinical trials until after the election.

“They all knew it but kept it from the public,” railed the president’s eldest son. “Big Pharma hates Trump for taking on the gouging of Americans with drug pricing while offering the same drugs elsewhere for pennies on the dollar.”

Nonetheless, Pfizer’s announcement was welcome news to Biden as he looks to tackle the weighty challenges of leading the nation and beating the virus.

During his remarks, he once again implored the country to put the election in the past and accept the results showing he won. “This election is over,” he said. “It’s time to put aside the partisanship and the rhetoric that is designed to demonize one another.”