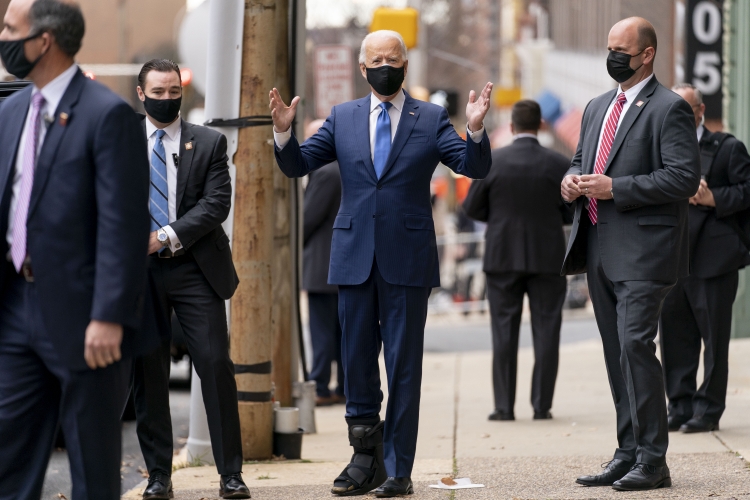 Kudos to Joe Biden for already fulfilling his one and only campaign promise: He’s not Donald Trump. Problem is, a four-year term awaits with no mandate for change.

That’s the price for conducting one of the most negative campaigns in American history. It’s not that Biden was nasty – though calling the president a “racist” and a “clown” at the first debate was downright Trumpian. It’s that he ran as the Candidate of Not. He was not Trump. He was not a radical leftist. He was not against fracking, not against the police, not a supporter of antifa – except when he was, which took us into the realm of the double negative campaign.

He pursued that strategy while not really running for office, hunkering down in his Delaware basement. This helps explain a recent Morning Consult poll that found that 44% of his supporters said they were chiefly voting against Trump.

It also illuminates Biden’s surprising lack of coattails, as Democrats lost House seats and Republicans held their own in legislative races as an expected blue wave turned a reddish purple.

Campaigning as the Candidate of Not will make it hard to govern a third term of Yes We Can! The question that has dogged Biden throughout his 47-year career – what, if anything, does the guy stand for? – remains.

Of course, Biden will claim a mandate as he pushes Democratic Party plans for higher taxes, greater regulation, and a lead-from-behind foreign policy. But this effort will be complicated by the fact that while more than half the nation found Trump’s personality repulsive, his policies were relatively popular. Domestic initiatives that spurred the economy and an aggressive posture abroad that confronted our enemies while demanding more from our allies are the main reasons Trump was favored to win a second term before COVID-19 emerged.

Biden’s early Cabinet picks, which are heavy on Obama administration alums, suggest a restoration of the previous regime. Is that what the American people want?

Outside of death and taxes, the future is unpredictable. But the past shows that Trump’s surprise victory in 2016 was not only a rejection of Hillary Clinton but a repudiation of Obama-Biden administration policies that turned the Democrats from a majority to minority party during its eight years.

To state the obvious-but-oft-forgotten point: If the country had believed the liberal line that Barack Obama was a modern Pericles, it wouldn’t have taken a flyer on a brash real estate developer and television star who had never held elective office.

Now that the transition is underway, Biden and his allies are trying to erase that history by pretending that he is already president and that Trump’s lingering presence is an existential threat to democracy if he exercises the authority of his office in a way that might conflict with Biden’s wishes.

This is the spin we’ve been hearing since Iran’s top nuclear scientist was assassinated last week – allegedly by the Israelis with U.S. support. That action is being condemned because it may impede Biden’s goal of reviving Obama’s signature foreign policy initiative, the Iran nuclear deal, which Trump abrogated.

But Trump is merely following existing presidential norms by doing what he can to make it harder for his successor to undo his policies. Obama did just that, with a vengeance. In 2016, Trump ran on improving relations with Russia. While Obama said little about alleged Russian interference in the election when he thought Hillary Clinton would prevail, he imposed new sanctions on the country after she lost. This not only complicated the president-elect’s plans, but led to specious claims that the incoming national security adviser, Gen. Michael Flynn, might have violated the 1799 Logan Act by discussing the sanctions with Russia’s ambassador before Trump’s inauguration.

This, we now know, was part of a larger Obama administration effort to delegitimize Trump’s victory – and his ability to undo the achievements of a president who ruled by fiat rather than legislation – culminating in the bogus Trump/Russia scandal.

The message then: The president is still the president. The message now: The president-elect is in charge. Biden’s claims of a mandate will also be complicated by the resistance Trump faced regarding his signature campaign issue: the wall.

It’s hard to think of another candidate who leaned so heavily on such a relatively small, albeit symbolically rich, issue. If ever a president had a mandate, Trump did — to build the thing.

Although the price tag for structures that could be easily removed by the next administration was barely a blip in the multi-trillion-dollar budget, Democrats repeatedly refused to give it to Trump without conditions he opposed. What’s worse, Republicans provided less than enthusiastic support for Trump’s promise to construct his “big, beautiful wall.”

The will of the people be damned. And so the Candidate of Not can add one more notch to his belt of negativity: He does not have a mandate.

‘What He Said Was Triggering’: Dave Chappelle Attacker Explains His Motivations...