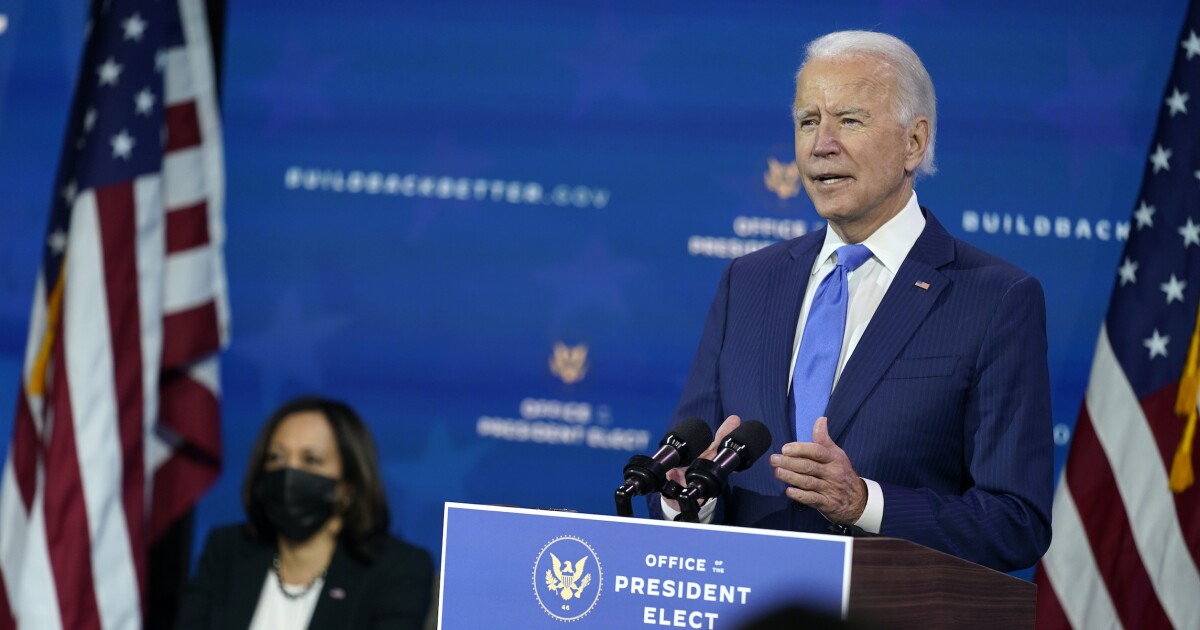 President-elect Joe Biden has offered contradictory accounts of his stance on the 2011 raid that killed Osama bin Laden, initially saying he opposed the operation and told President Barack Obama not to do it, but later changing his account to say he hedged in front of others but privately told Obama to go ahead.

The former vice president’s most recent descriptions of his stance, when he morphed from vocal opponent of the raid to private supporter of it, contradict the public accounts of former Secretary of State Hillary Clinton, former Secretary of Defense Bob Gates, former CIA Director Leon Panetta, Obama himself, and others.

Biden provided his most recent version in an interview for a CNN documentary titled President in Waiting that aired Saturday, first reported by the Daily Beast. The president-elect gave his account of the April 28, 2011, meeting in the Situation Room, where Obama asked his national security advisers what they thought. Options included a raid or drone strike, and Obama wanted to be able to confirm bin Laden’s death.

Biden said to hold off on the raid.

“And I’m the last person in the room. Well, again, this is a place where I’ve gotta reserve space, in my view, for the president. And there was one option that was remaining. You could’ve done one more very low flight … in spying down on the site to determine whether this was bin Laden,“ Biden said, adding, “I said, ‘I didn’t think we had this many economists in the room. On the one hand, the other hand.’ I said, ‘Mr. President,’ to give him space, I said, ‘I think you should wait and do one more pass.’ Knowing that if you made a lower pass, they might observe it, and he’d flee.”

Biden claimed he then quietly encouraged Obama to go with his gut.

“But then, I walked out, as I always did after every meeting of the security council, I’d walk up to the office, and we’d have a private discussion. And I said, ‘Mr. President, follow your instincts on this one.’ Because what I didn’t want to have happen — he risked his entire presidency, and it took real, real, real courage to make that decision,” Biden said. “And had this decision been wrong, had he not been there or had it failed, I doubt whether the 17 people around that table said, ‘I told him he should go.’ So I was trying to preserve space for him.”

This account contradicted prior versions of Biden’s telling as well as Obama’s own version, revealed in detail in writing for the first time in his new memoir, A Promised Land. Obama said Biden opposed the raid and made no mention of any private encouragement from the now-president-elect to go for it.

Obama wrote that Adm. William McRaven, who helped plan the operation, told the assembled that preparations for the raid were ready, while Gen. James Cartwright said the secondary option of a drone strike could also be quickly activated.

The former president said Panetta, former CIA Director John Brennan, and former CIA Deputy Director Mike Mullen “favored the raid.” Obama wrote that Clinton said, “It was a 51–49 call,” but that “she ultimately came down on the side of sending in the SEALs.” Gates “recommended against a raid” and raised the failed 1980 helicopter rescue of the U.S. hostages in Iran and also “worried that a failed mission might adversely impact the war in Afghanistan.”

“Joe also weighed in against the raid, arguing that given the enormous consequences of failure, I should defer any decision until the intelligence community was more certain that bin Laden was in the compound. As had been true in every major decision I’d made as president, I appreciated Joe’s willingness to buck the prevailing mood and ask tough questions, often in the interest of giving me the space I needed for my own internal deliberations,” Obama wrote.

After the meeting, Obama didn’t mention a secondary talk with Biden, saying instead that then-national security adviser Tom Donilon “walked back to the Oval Office with me” to talk.

During a presidential debate with now-Sen. Mitt Romney on Oct. 22, 2012, Obama indicated Biden had opposed the raid, telling Romney that “even some in my own party, including my current vice president, had the same critique as you did.”

The CIA-planned U.S. special forces raid was carried out by SEAL Team Six when it disembarked from two MH-60 Black Hawks on May 2, 2011. It was launched from Jalalabad, Afghanistan, targeted bin Laden’s compound in Abbottabad, Pakistan, and killed the al Qaeda leader and mastermind of 9/11.

The New York Times reported that Biden said at a late May 2011 Democratic fundraiser that he told Obama to “wait another seven days for information.”

The year afterward, Biden described himself as openly opposed to the raid. Speaking at a House Democratic Party retreat on Jan. 27, 2012, Biden said, “Every single person in that room hedged their bet” except for Panetta, who Biden recounts said, “Go.”

Biden said he criticized other people at the table and advised against the operation, saying: “We owe the man a direct answer … Mr. President, my suggestion is: Don’t go. We have to see two more things to see if he’s there.”

But Biden soon began shifting his story, telling New York Times Magazine in January 2013 that “I remember walking up to his office and saying, ‘Look, follow your instincts.'”

When weighing a presidential run, he said at an event at George Washington University on Oct. 20, 2015, that he didn’t give a definitive answer at the meeting but told Obama privately he was in favor of it.

In this new telling, there were now “only two people who were definitive and were absolutely certain” — Panetta in favor and Gates opposed. Biden said he “joked” to the rest that “y’all sound like 17 Larry Summers, economists.”

But when Biden was asked for his thoughts, he no longer said he'd told Obama not to do it but had suggested “there was a third option that I didn’t really think we should do” and says he told everyone that “I think we should make one more pass with another UAV to see if it is him.”

But Biden said that “as we walked out of the room and walked upstairs, I told him my opinion, that I thought he should go but follow his own instincts.” Biden said being definitive at the meeting “would’ve been a mistake.”

“Imagine if I had said in front of everyone ‘Don’t go’ or ‘Go’ and his decision was a different decision?” Biden said. “It undercuts that relationship. So, I never, on a difficult issue, never say what I think finally until I go up in the Oval with him alone.”

Biden told CBS News on Oct. 26, 2015, to explain the contradictions. Biden claimed that “everything I said was completely accurate, I just never, until last Tuesday night, told the whole story.”

When Biden was pressed on this, he said, “The reporting was accurate when I said ‘I didn’t say go.’ And I didn’t. What I said was, ‘Mr. President, try one more thing.’”

“Imagine if I had said, ‘Mr. President, go’ and he didn’t go? And then bin Laden did something else bad? They would’ve said, ‘Well, everybody said, even his vice president said to go, and he said no,’” Biden claimed. “And had I said, ‘By the way, when I went up privately I told him to go,’ it would’ve made it look like I was self-aggrandizing.”

In January, then-primary candidate Biden was pressed to answer for his contradictory accounts and told a reporter that it wasn’t true that he advised Obama against the operation.

Peter Bergen, the author of Manhunt: The Ten-Year Search for Bin Laden from 9/11 to Abbottabad, included a lengthy quotation of Biden’s words at the White House meeting: “We need greater certainty that Bin Laden is there … The risks to the Pakistani relationship and its importance are such that we need to know more before acting … Mister President, my suggestion is: Don’t go.”

Clinton also said Biden opposed the raid, while she supported it, writing in her memoir, Hard Choices, that “I respected Bob [Gates] and Joe [Biden]'s concerns about the risks of a raid, but I came to the conclusion that the intelligence was convincing and the risks were outweighed by the benefits of success.”

In his book Worthy Fights, Panetta wrote: “Biden argued that we still did not have enough confidence that bin Laden was in the compound, and he came out firmly in favor of waiting for more information.”

Gates wrote in his memoir, Duty: Memoirs of a Secretary at War, that Biden opposed the raid, writing, “Joe Biden and I were the two primary skeptics.” Gates recounted that “Biden’s primary concern was the political consequences of failure” and “Biden was against the operation.”

Earlier in the book, Gates said of Biden: “I think he has been wrong on nearly every major foreign policy and national security issue over the past four decades.”