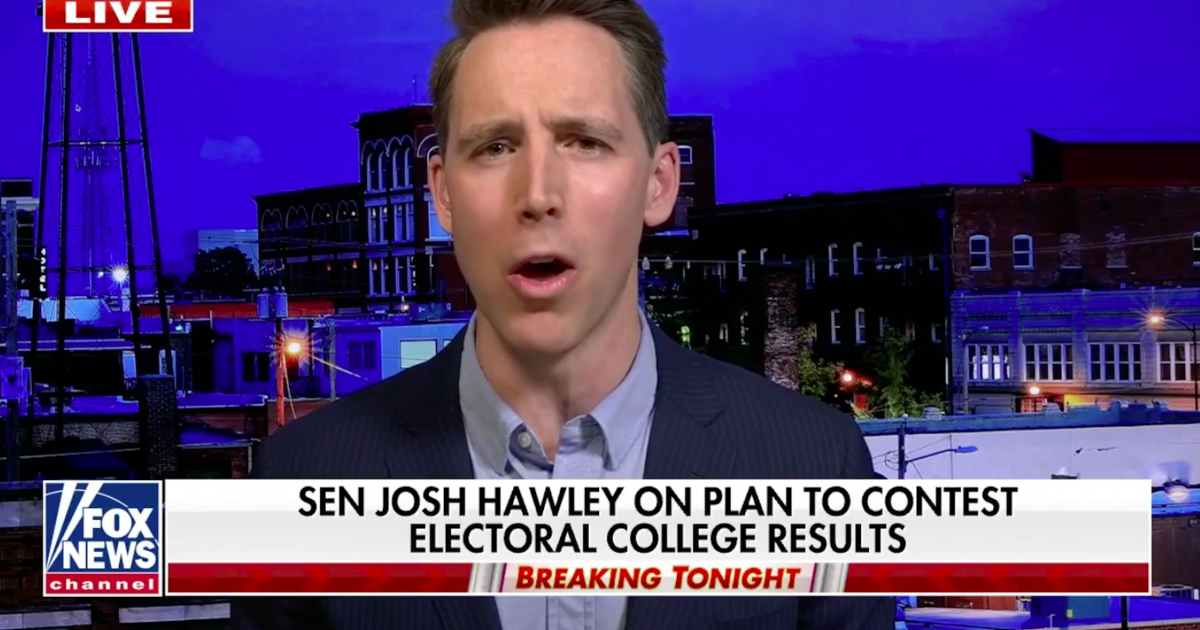 Sen. Josh Hawley was challenged to explain the efficacy of his planned objection to certifying all of President-elect Joe Biden’s Electoral College votes by Fox News anchor Bret Baier.

The Republican from Missouri declined to say under questioning on Monday whether his ultimate goal was to help President Trump by trying to overturn the results of the Nov. 3 election, which Biden won by 74 Electoral College votes.

“This is the only forum I have to do it,” Hawley insisted.

Hawley, who was the first senator to announce that he would join a coalition of House Republicans to challenge the certification of electoral votes, highlighted Pennsylvania, where the Trump campaign's election lawsuits have repeatedly faced setbacks in court.

“When you look at something that happened — or like what happened in Pennsylvania, for example, where you had a state that didn't even follow its own constitution and its own laws, you have got allegations of irregularities in that state and many others, it is vital that we be heard on this issue, and we have a chance to debate it,” Hawley said.

“Well, Bret, that depends on what happens on Wednesday. I mean, this is why we have the debate,” Hawley responded before Baier interjected and said, “No, it doesn’t.”

“I mean, the states, by the Constitution, say they certify the election,” Baier explained. “They did certify it. By the Constitution, Congress doesn't have the right to overturn the certification, at least as most experts read it.”

Hawley and Baier briefly discussed the 1876 presidential election between Republican Rutherford B. Hayes and Democrat Samuel Tilden, where the returns of three states were disputed, leading to the creation of a congressional commission to decide how the votes should be allocated, eventually handing the election to Hayes.

“But now, all of the states have certified their elections as of Dec. 14. So, it doesn't, by constitutional ways, open a door to Congress to overturn that, does it?” Baier wondered.

“There’s a statute that says — that governs what Congress does on January the 6th. And it says that we have a vote of certification and that we have the opportunity to debate the results, to certify the results, we count them, and then we certify,” the senator responded. “And my point is, this is my only opportunity during this process to raise an objection and to be heard, I don't have standing to file lawsuits. … I can't investigate claims of voter fraud on my own. But I do have a responsibility in this joint session of Congress to either say I have got no problem with it or I do have a problem with it. And my constituents expect me, and they're right, to say I have a problem.”

Vice President Mike Pence will preside over a joint session of Congress on Wednesday, where the Electoral College votes will formally be tallied. Other Republicans in the Senate, including Sens. Ted Cruz and Kelly Loeffler, followed Hawley in saying they would challenge the results of the contest.