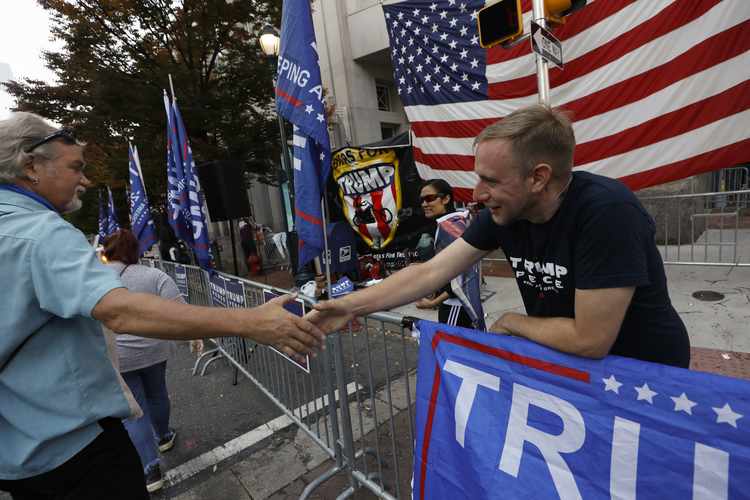 The South Carolina senator was specifically addressing why “President Trump should not concede” the election after “allegations of system failure [and] fraud.” But he also indirectly broached a wider truth. So let that truth come marching in about the GOP’s bleak prospects for no “Republican president elected again.” If Republicans choose to confront it, they need only look at exit polls from the Washington Post, ABC News, and NBC News, all reporting similar demographic voter data (and subject to change).

At this writing, it appears that Joe Biden is on track to win 306 electoral votes. Ironically, that is the exact number Donald Trump won in 2016, which he often characterized as a “landslide.” (Officially, and after two electors defected, Trump won 304 votes.)  Yet, Trump failed to win the popular vote in either of his presidential races. Although not the final 2020 numbers, Biden has a respectable margin of 50.8% to 47.5%. Nonetheless, Trump deserves credit. Yes, Biden is ahead by 4.8 million votes – 76.6 million compared to Trump’s 71.8 million – but the president increased his 2016 total by a whopping 8.9 million votes, up from 62.9 million.

We know that winning the presidential “popular” vote does not grant entry to the Oval Office. The candidate must have robust support to muster the math needed to earn at least 270 electoral votes. But the popular vote points to a stark, inconvenient truth that is tough for the GOP to handle.

Starting in 1992, there have been eight presidential elections, but only once, in 2004, has the Republican nominee won the popular vote. And my party cannot count on the rare Electoral College “flukes” of 2000 and 2016 that delivered the White House. The truth of the GOP’s demographic crisis becomes more apparent after examining the pertinent 2020 exit data.

Let’s start with whites – 67% of all voters, but down from 70% in 2016. That decrease should shock Republicans for three reasons.

First, three percentage points in four years is greater than the decrease from 2012 to 2016 when the white vote dropped two points, from 72% to 70%.

Second, the exit polls agree that Trump triumphed with white voters, winning them by 17 percentage points, 58% to 41%. However, in 2016 he won whites by 20 points over Hillary Clinton, 57% to 37%. It does not take a math genius to figure that Trump losing three percentage points of white voters after the white electorate itself decreased by three points contributed to his defeat. Conversely, if Trump had won the white vote by at least 20 points or more a second time, he would be planning his second inauguration.

Third, in January 2020, the respected Pew Research Center projected that eligible white voters would be 66.7% of the electorate. Pew underestimated by 0.3 percentage points, probably due to record turnout, but will the white electorate shrink another three percentage points, or more, by 2024? The aging and dying white population could support such an estimate.

Consequently, the next GOP presidential nominee must capture an ever increasing share of the white vote if he or she lacks greater appeal to minority voters. In 2024 perhaps the nominee will need to earn 20 to 25 percentage points more than the Democratic candidate in order to win the popular vote and reach 270 electoral votes.

In September, I wrote a RealClearPolitics piece headlined “How the Hispanic Vote Is Growing in Power.” Again, I used Pew Research Center data projecting eligible Hispanic voters to be 13.3% of the 2020 electorate. In 2016, Hispanics were 11% of voters.

The new exit poll data shows Hispanics at 13%, a record two-point increase, doubling what had been a steady one percentage point increase every four years. Joe Biden won 65% – down slightly from the 66% that Clinton won in 2016. In the meantime, there has been much reporting about how Trump increased his percentage among Hispanic voters. Yes, he did, winning 32%, up from 28% in 2016. However, as I wrote two months ago in that Hispanic power piece, “By now, [Hispanics’] two-thirds support for Democrats is a well-established voting pattern.”

If trends continue, the 2024 electorate is likely to be about 15% Hispanic. Thus, with the GOP traditionally winning only about one-third, dramatically increasing the share to 40% or 50% will be a challenge for any Republican presidential nominee. Remember that in 2004, George W. Bush won reelection with support from 44% of Hispanics. Does that help explain why he is the only Republican to win the popular vote in the last eight presidential elections?

Biden won 87% of Black voters but dropped two percentage points from Clinton’s 89% in 2016. Trump increased his share of African American voters, winning 12%, up from 8% in 2016. By comparison, since the 1980 election, the GOP presidential nominee who won the highest percentage of African American votes was Ronald Reagan with 14%, and Blacks were then 10% of the electorate. In 2020, Trump, with his 12% share, is tied for second place with Bob Dole in 1996.

Asian American voters stayed steady at 4% of the electorate. Biden won them by 27 points, 61% to 34%. But Trump increased his margin by seven points over 2016 when Clinton won Asians 65% to 27%. That is good news for the GOP, but more improvement is needed as this demographic continues to grow.

Overall, the 2020 non-white vote was 33% of the electorate, with Biden winning 71% to 26% for Trump. Henceforth, with the non-white vote potentially growing every four years, if the GOP continues on its current trajectory, Lindsey Graham’s inartful statement is destined to be a political reality.

But what exactly did Graham mean when he said, “If Republicans don’t challenge and change the U.S. election system, there will never be another Republican president elected again”? We know he is accusing Democrats of cheating now, but is he also insinuating as much into the future? And, is he slyly suggesting that the GOP permanently try to suppress the non-white vote?

Here is a more grounded suggestion: The Republican National Committee should dust off and update its famous “2013 autopsy report.”  It was written after Mitt Romney’s 2012 devastating loss to Barack Obama when it was clear that although Romney won white voters by 20 points – 59% to 39%, with whites then 72% of the electorate – the demographic crystal ball looked more brown and black. (Romney won only 6% of Blacks, 27% of Hispanics, and 26% of Asians.)

Astonishingly, in 2016 Trump blew up the autopsy recommendations of “widening the tent” by focusing on engaging whites, especially blue-collar men in the Rust Belt. Now that Trump has lost the “blue wall” states – and potentially the reliably red states of Arizona and Georgia – a new blueprint (or should I say “redprint”) is needed to build the most massive, inclusive political party that policy, attitude, and money can buy.

In the meantime, bottle the policy ingredients that Trump used to marginally increase his percentage of non-whites and that helped win back House seats and likely keep control of the Senate. Then, ban Lindsey Graham from publicly discussing “challenging and changing” the U.S. election system when it’s demographic changes that are the greatest impediment to electing another Republican president. This is a truth the GOP must handle.

Myra Adams is a media producer and writer with numerous national credits. She served on the McCain Ad Council during the GOP nominee’s 2008 campaign and on the 2004 Bush campaign creative team. She can be reached at [email protected] or @MyraKAdams on Twitter.