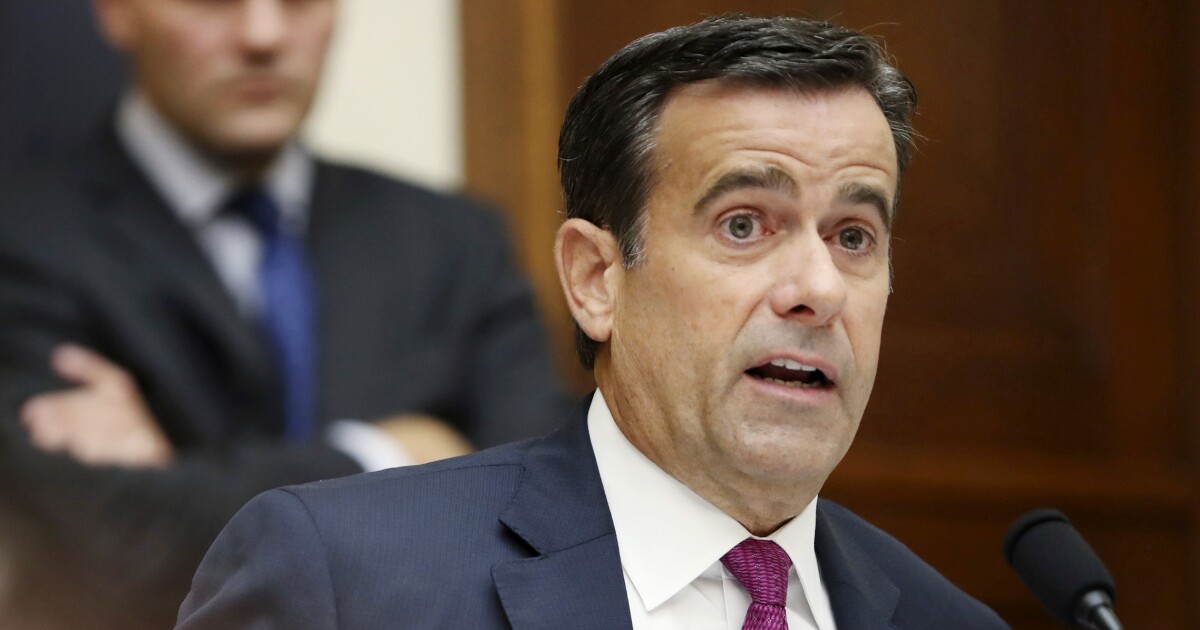 The nation’s spy chief said the Chinese Communist Party is conducting a “massive influence campaign” aimed at dozens of members of Congress and their staffs in an effort involving attempted blackmail and bribery.

Director of National Intelligence John Ratcliffe, a former Republican congressman from Texas who has overseen the United States's 17 intelligence agencies since May, said Thursday that he briefed the House and Senate Intelligence Committees about the Chinese influence operations. He did so as he went on a small media tour warning about the growing challenge posed by the Chinese Communist Party. Ratcliffe said the intelligence indicates it is the greatest national security threat facing the U.S.

“This year China engaged in a massive influence campaign that included targeting several dozen members of Congress and congressional aides,” Ratcliffe wrote in a Wall Street Journal op-ed, saying that China uses both public and secretive pressure to push lawmakers to do its bidding, wittingly or unwittingly.

Ratcliffe described a representative hypothetical scenario to illustrate how China carries out such influence operations.

“A Chinese-owned manufacturing facility in the U.S. employs several thousand Americans. One day, the plant’s union leader is approached by a representative of the Chinese firm. The businessman explains that the local congresswoman is taking a hard-line position on legislation that runs counter to Beijing’s interests — even though it has nothing to do with the industry the company is involved in — and says the union leader must urge her to shift positions or the plant and all its jobs will soon be gone,” Ratcliffe wrote. “The union leader contacts his congresswoman and indicates that his members won’t support her re-election without a change in position. He tells himself he’s protecting his members, but in that moment he’s doing China’s bidding, and the congresswoman is being influenced by China, whether she realizes it or not.”

The spy chief added further details during an interview with Catherine Herridge of CBS News.

“They want laws and policies out of the United States that are favorable to China, and what they’re really trying to do is, through blackmail, through bribery, through overt and covert influence, trying to make sure that only laws that are favorable to China are passed,” Ratcliffe said. “I was so troubled by what I saw from the position as the director of national intelligence that I went and briefed both the House and the Senate intelligence committees on this information, which they found surprising and troubling.”

Ratcliffe’s revelation came the day after William Evanina, the director of the National Counterintelligence and Security Center, warned during an Aspen Cyber Summit that China was seeking to influence members of President-elect Joe Biden’s incoming team.

FBI Director Christopher Wray issued a warning similar to Ratcliffe’s during a speech at the Hudson Institute in July.

“China is engaged in a highly sophisticated malign foreign influence campaign, and its methods include bribery, blackmail, and covert deals. Chinese diplomats also use both open, naked economic pressure and seemingly independent middlemen to push China’s preferences on American officials,” Wray said at the time.

The FBI chief presented “one all-too-common illustration” of such Chinese activity.

“Let’s say China gets wind that some American official is planning to travel to Taiwan — think a governor, a state senator, a member of Congress. China does not want that to happen, because that travel might appear to legitimize Taiwanese independence from China — and legitimizing Taiwan would, of course, be contrary to China’s ‘One China’ policy,” Wray said, adding that “China will sometimes start by trying to influence the American official overtly and directly. China might openly warn that if the American official goes ahead and takes that trip to Taiwan, China will take it out on a company from that official’s home state by withholding the company’s license to manufacture in China. That could be economically ruinous for the company, would directly pressure the American official to alter his travel plans, and the official would know that China was trying to influence him.”

But Wray said that “the Chinese Communist Party often doesn’t stop there.”

Wray also said that the FBI has more than 2,000 active investigations traced back to the Chinese government.