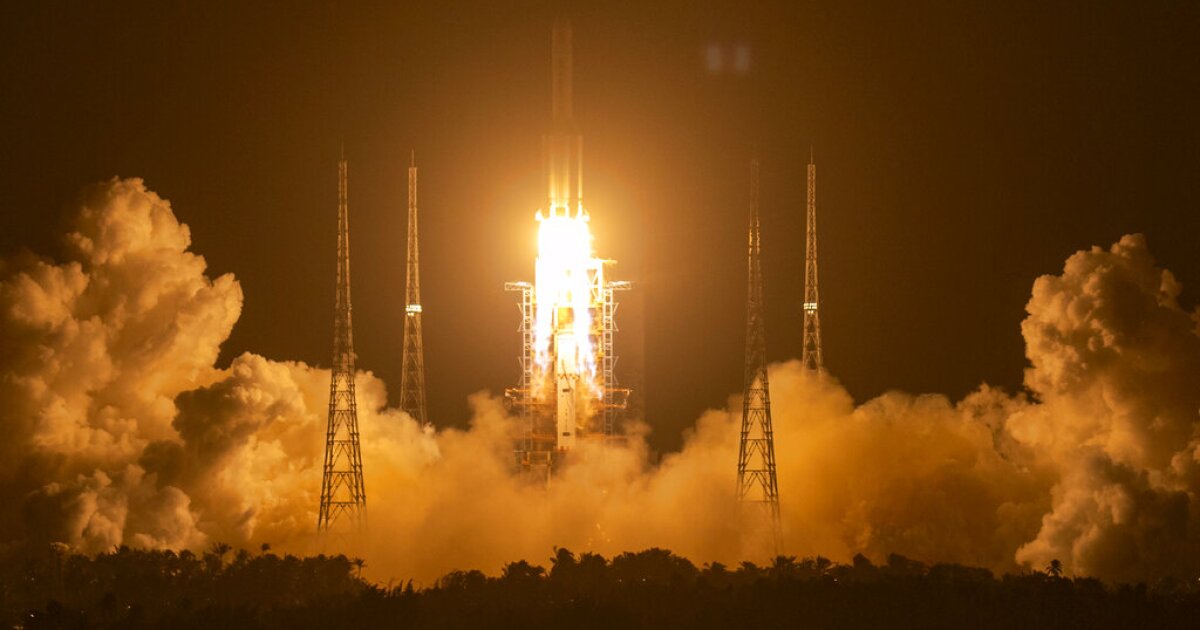 But news of the successful landing was shrouded in confusion caused by the Chinese government cutting off the live feed of the highly anticipated event minutes before it was set to take place.

The lunar spacecraft, Chang’e-5, named for a Chinese moon goddess, will now spend an estimated two days tasked with collecting 2-4 kilograms of rock and dirt samples, known as “regolith,” from as deep as 2 meters on the moon’s surface using the lander’s coring drill and robotic arm before returning to the Earth, according to NASA.

If successful at bringing the lunar samples back to Earth, China would be just the third country to do so, following the United States’s Apollo missions and the former Soviet Union’s Luna missions, and will be the first to have done it since the USSR in 1976. The U.S. is the only country to put a man on the moon.

Before the Chang’e-5’s scheduled landing Tuesday morning, the Chinese government ceased the live broadcast, and China Central Television briefly reported that the landing would resume 11 hours later. But just a few minutes later, CCTV aired a video purporting to show a successful lunar landing had just taken place, and Chinese government outlets, such as Xinhua News and People’s Daily, soon reported that the China National Space Administration had announced a successful landing on the near side of the moon. The spacecraft landed in the Mons Rumker region of Oceanus Procellarum, the “Ocean of Storms,” an area with a surface formed by ancient volcanic eruption floods that has soil more than a billion years old. The samples brought back by the U.S. and the Soviet Union are thought to be more than 3 billion years old.

“Congratulations to China on the successful landing of Chang’e-5. This is no easy task,” the NASA scientist said. “When the samples collected on the Moon are returned to Earth, we hope everyone will benefit from being able to study this precious cargo that could advance the international science community.”

The Defense Department released a congressional report in September noting that the Chinese government's “space enterprise continues to mature rapidly” and that “Beijing has devoted significant resources to growing all aspects of its space program, from military space applications to civil applications such as profit-generating launches, scientific endeavors, and space exploration.”

NASA has said that the Chang’e-5 mission involved four modules for entry into lunar orbit, including two in the descender vehicle and two in the orbital vehicle.

The lander module is designed to collect samples and transfer them to the second module, the ascent module, which is equipped to launch from the moon’s surface back into lunar orbit. It will dock with the orbiting service capsule module, which will then transfer the samples to the return capsule module, designed to take off from lunar orbit and return the samples to Earth.

Chang’e-5 launched from Wenchang Space Launch Center on Nov. 23 and went into lunar orbit on Saturday. The descender separated from the orbiter the next day. The return vehicle is scheduled to come back to Earth and land in Inner Mongolia in mid-December.

Last month, teams at NASA’s Kennedy Space Center began building its new Space Launch System megarocket. The megarocket is set to make its first voyage to the moon in November 2021, and it is expected to be the next vessel to get U.S. astronauts back to the moon this decade, with a journey tentatively set for 2024. Those voyages, part of the Artemis program, are expected to bring the first woman to the moon.

Separately, NASA partnered with Elon Musk’s SpaceX to launch a crew of four astronauts to the International Space Station this month.

James Morhard, the deputy administrator of NASA since 2018, told the Washington Examiner in May that the NASA-SpaceX partnership was about “leading the beginning of a space revolution — and who leads in space will lead the world.”

Morhard said that being able to use American rockets again to get astronauts to the International Space Station and beyond “is about having unfettered access to space,” and he pointed out that “we have had to rely on the Russians — it’s been nine years since we’ve had a certified American rocket to carry our astronauts.”

Since the space shuttle program shut down in 2011, the U.S. has had to hitch a ride on Russian Soyuz rockets until the successful SpaceX launches began this year. NASA’s second-in-command also pointed out that, in terms of U.S. national security, the Chinese Communist Party’s plans for space are ambitious.

“The People’s Republic of China has a parallel track with us to get into low earth orbit and to get a space station up there,” Morhand said. “They want to land a man on the moon by 2030.”

NASA is also working on manned missions to Mars in the future.