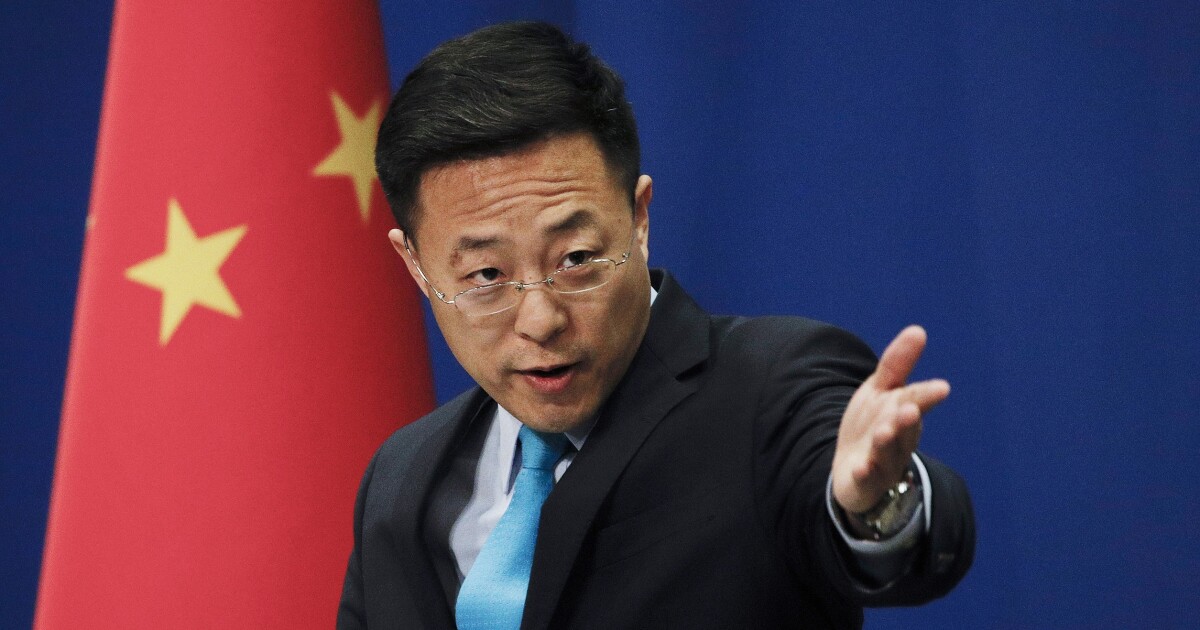 The Chinese government dismissed a House GOP report that argues COVID-19 escaped from a Wuhan lab in late summer 2019, arguing it is based on “concocted lies.”

The Communist Party also pointed a finger at the U.S. military, a tactic Republicans said made sense if it was trying to cover up the outbreak's source.

House Foreign Affairs Committee Republicans concluded the October 2019 World Military Games in Wuhan were “one of the earliest super spreader events” of the pandemic, with the report contending COVID-19 emerged from the Wuhan Institute of Virology in late August or early September 2019, with China covering it up for months.

The report zeroed in on the event, during which more than 9,000 military personnel from over 100 countries came to compete in Wuhan, where Republicans argue the Chinese government knew the virus was circulating.

“The relevant report, totally based on the concocted lies and distorted facts without providing any evidence, is not credible or scientific,” the statement read.

It claimed the report “smears and slanders China in pursuit of political gains” and said the Chinese government “expresses categorical opposition to and strong condemnation of such despicable acts.”

China’s embassy in the United States also shared the statement.

The Chinese Foreign Ministry pointed to “U.S. military personnel” who allegedly “fell ill during the Military World Games in Wuhan” and called for an international inquiry into the U.S. Army’s Fort Detrick in Maryland, something China has done dozens of times before.

China added: “We urge the U.S. to respect facts and science and focus on fighting COVID-19 and saving lives, instead of engaging in political manipulation.”

The GOP report said “the PRC’s efforts to obfuscate the origins of COVID-19 were not limited to destroying samples and silencing doctors, but featured a sustained disinformation campaign as well.”

It specifically pointed to Chinese Foreign Ministry spokesman Zhao Lijian and other Chinese officials and outlets that have pushed baseless claims about the U.S. military since at least March 2020.

Zhao himself tweeted Tuesday: “If we just stop and think for a moment, we’ll find the U.S. has done so many highly suspicious things, which are all linked to #COVID19 origins. So if the U.S. wants to cover it up, the best way is…?” He included a graphic that again pointed to Fort Detrick and brought up the 2019 Wuhan games.

The GOP report emphasized: “If the CCP realized an investigation would show an uptick in visits of patients with symptoms similar to COVID-19 in September, October, and November of 2019, this would likely be the actions they would take to cover up the source of those illnesses.”

Zhao and others have pushed the U.S. Army claims for months and revived them earlier this year as the World Health Organization-China COVID-19 report was made public.

The U.S. has previously dismissed the Chinese claims as “false, baseless and unscientific,” as well as a “myth.”

The GOP report contended the virus spread throughout Wuhan, “likely via the Wuhan Metro.”

“In order to prevent national embarrassment, the decision was made to allow the 2019 Military World Games to continue. No spectators were allowed to attend the games, but international athletes and some of the 236,000 volunteers still became infected, spreading the virus in the city,” the GOP report argued. “Dozens of athletes fall ill with symptoms. … The athletes return to their home countries in late October, carrying SARS-CoV-2 across the world.”

Rep. Michael McCaul, the ranking member on House Foreign Affairs, said Monday: “When they realized what happened, Chinese Communist Party officials and scientists at the WIV began frantically covering up the leak.”

“But their coverup was too late — the virus was already spreading throughout the megacity of Wuhan. … Athletes at the Military World Games became sick with symptoms similar to COVID-19. Some of them carried the virus back to their home countries — creating one of the earliest super spreader events in the world.”

Hu Xijin, the editor-in-chief of the Chinese state-run Global Times, tweeted Monday: “Since when has the Republican Party become a party of science? It is perhaps a ‘cult’ party since it claims to know what happened on the other side of the earth.”

The GOP report on Monday said: “To further drive this narrative, CCP-controlled media outlets accused Maatje Benassi, a member of the U.S. Army Reserve, as being ‘patient zero.’ Benassi competed at the Military World Games without becoming ill. … Two weeks after Zhao tweeted that the U.S. army brought the virus to Wuhan, the Global Times amplified the narrative.”