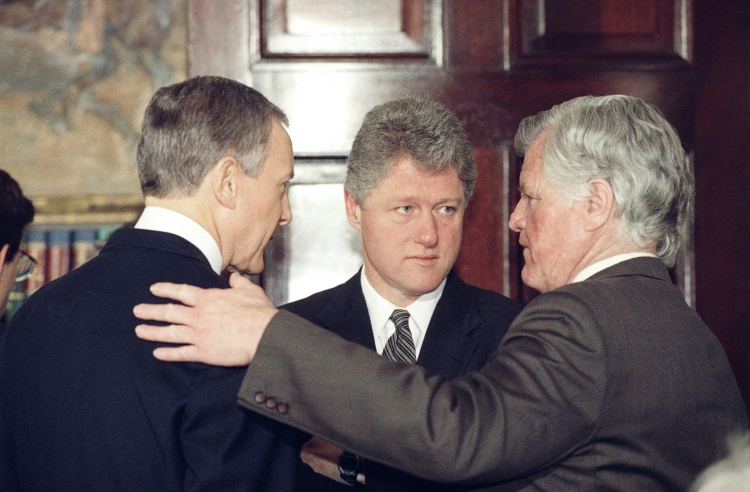 Washington has become the “octagon,” where trophies for political one-upmanship are handed out like candy, and scandals (real or imagined) are packaged as the top news of the day.

Yet in a nation yearning for character, and with a new president committing to unity, there’s a real opening for Washington’s elected officials to do something wholly unexpected but desperately needed: “compromise.”

While that word sounds like an expletive to many in the political trenches who habitually counsel against vacillation and temerity, these hyper-partisan political warriors are mistaken. History teaches us that compromise is often the only way to break political gridlock. Right now, it is the only way America can dream big and go big. The only way to overcome a pandemic that refuses to relent and save small businesses that refuse to quit; to re-imagine a future where protecting a warming planet doesn’t leave American workers out in the cold; to stop the growing incivility that fuels hatred instead of harnessing hope.

The good news: We’ve done this before. In a nation forged by diversity and common interest, compromise yielded some of America’s biggest breakthroughs and boldest statements of humanity.

In 1787 Roger Sherman, a Connecticut farmer, shoemaker and justice, helped craft the “Great Compromise.” With the nation’s Founders worried the will of the people would not prevail over the landed and powerful (“[people] want information and are constantly liable to be misled”), Sherman fashioned a remedy: equal representation of states in the Senate but proportional representation in the House.

Nearly a century later, Abraham Lincoln recruited a “team of rivals” (William Seward, Salmon P. Chase and Edward Bates) to put aside their differences, their animosities, their personal ambitions, to save a nation tearing itself apart from within. As historian Doris Kearns Goodwin observed, “[Lincoln’s] philosophy was not to waste precious energies on recriminations about the past.”

It’s a philosophy that presidents and lawmakers on Capitol Hill have employed many time since, at crucial pivot points in America’s long evolution, in search of a more perfect union. Consider:

—  In the 1940s, the Marshall Plan and NATO were all made possible when influential Senate Foreign Relations Committee Chairman Arthur Vandenberg, a Republican and a onetime isolationist, took it upon himself to forge bipartisan support for the Truman Doctrine. “Partisan politics,” Vandenberg said at the beginning of the 80th Congress, should stop “at the water’s edge.”

— In the 1960s, major civil rights legislation became law in this country because a venerable Republican Senate leader (Everett Dirksen) and dedicated young Democratic reformer (Sen. Hubert Humphrey) hammered out a meticulous compromise with the shared aim of breaking a filibuster by Southern Democrats. “Stronger than all the armies,” Dirksen said on the Senate floor, quoting Victor Hugo, “is an idea whose time has come.” Needing 67 votes, Dirksen and Humphrey got 71. The result was The Civil Rights Act of 1964.

—  In the 1990s, after sweeping Clinton administration health care legislation floundered on Capitol Hill, Massachusetts Democrat Edward Kennedy and Utah Republican Orrin Hatch  decided to solve a huge and growing national humanitarian crisis: the children of the working poor whose parents couldn’t afford medical insurance but made too much to qualify for Medicaid. Their solution was the federal Children’s Health Insurance Program. “Senator Kennedy and I designed our bill to fill this gap and meet those needs,” Hatch said three years ago when CHIP was reauthorized for six more years. Today, it’s hard to find anyone who opposes it.

That’s what the best political compromises do: They help form a new consensus. Compromise-turned-consensus also created Medicare, funded American’s journey to the moon, saved Social Security from insolvency, and more recently saved lives by streamlining the approval process for getting life-saving drugs to market. We need such greatness now from those we’ve chosen to lead the way.

It begins by recognizing no party has a monopoly on virtue or a claim to omniscience, that there are different ways to blaze a common path without setting each other on rhetorical fire.  It begins by tabling the rancor of now (an impeachment trial, calls for de-programming non-believers, venom from outside groups profiting from COVID-fueled distress) in favor of addressing the crises of now.

It also means embracing the public’s message from last November. More than 155 million Americans voted for a virtually split House and Senate — voters whose ideological bent is neither left nor right but forward.

To succeed, we again need the kind of unity only compromise can encourage and sustain. That means listening, adapting, considering, and melding, while vowing to move not as combatants but as patriots.

All eyes in Washington are on the Senate these days, to see if a group of relatively moderate members (Joe Manchin, Michael Bennet, Mark Warner and Jon Tester among the Democrats; Susan Collins, Lisa Murkowski, Mitt Romney and Richard Shelby among the Republicans) can prove compromise is not a dirty word but rather a path to national salvation.

Pull for them, because greatness is not achieved through righteousness but secured by selflessness.

Adam Goodman is a national Republican media strategist and columnist. He is a partner at Ballard Partners in Washington, D.C., and the first Edward R. Murrow Senior Fellow at Tufts University's Fletcher School. Follow him on Twitter @adamgoodman3.