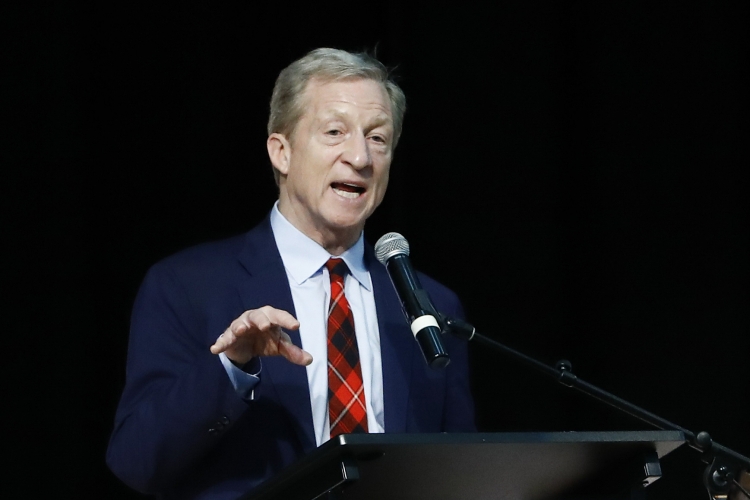 Efforts to recall California Democratic Gov. Gavin Newsom are subject to the winds of time and time is on Newsom's side. The deadline to submit 1.5 million valid signatures of registered voters to the state is March 17; nearly 2 million signatures must be submitted to allow for many invalid signatures. Time is tight.

If successful, the recall ballot will contain two questions. The first is a yes-or-no vote: “Shall Gavin Newsom be recalled (removed) from the office of Governor?” The second part is a list of candidates to replace him if the recall succeeds. If more than 50% of voters vote yes on the first question, the candidate with the most votes on the second portion becomes governor.

In 2003, Gov. Gray Davis was removed by the recall process. Arnold Schwarzenegger prevailed in a circus-like field of 135 replacement candidates. Can it happen again?

In non-pandemic times, it is an expensive but straightforward path to qualify a ballot measure. Ballot proponents retain firms specializing in obtaining signatures, earning $4-$5 per valid signature. Gatherers grab clipboards and stacks of petitions to stand outside grocery stores, sporting events, and wherever people gather.

The pandemic shredded that playbook. Recall proponents adjust with online signature gathering (only “wet” signatures — in which the form is printed out, signed, and mailed back — qualify) and a direct mail effort. I was campaign manager for two successful Los Angeles City Council campaigns and chairman of a Los Angeles County ballot measure; presume the mail program targets high-propensity voting Republican households, ideally with more than one voter.

California suffers from an uneven COVID-19 vaccine distribution strategy. In mid-January, the state ranked 50th in its percentage of having administered vaccines delivered to the state. It now ranks 39th, but in the land of Silicon Valley innovation, the weak rollout created boiling frustration.

California’s economic problems certainly preceded Newsom’s arrival in Sacramento: Oracle, Tesla, Hewlett-Packard, Toyota, and others fled to escape strangling regulatory burdens, oppressive taxes, and sky-rocketing housing costs for employees; our homeless population is visibly increasing. One embarrassment can be dropped squarely in Newsom's lap, however: The state paid $11.4 billion in fraudulent unemployment benefits. Politico reported that $1 billion of that amount went to more than 35,000 convicts in California prisons.

But what really fueled the recall effort against Newsom was an optic-cringing, self-inflicted wound. While advising Californians to avoid crowds, wear masks, and maintain social distance, Newsom was photographed dining at the posh Napa Valley restaurant French Laundry with friends, staff, and lobbyists. In those photos, none of the diners were distanced, none wore masks, suggesting that neither Gavin nor his entourage adhered to his advice. The restaurant has earned three Michelin stars; its $350 fixed-price menu undoubtedly delicious, but Gavin undoubtedly had a bitter aftertaste.

None of this is to say that the recall result is a foregone conclusion. The governor’s job approval rating hasn’t yet declined to a critical point. And as Susan Crabtree reported in RealClearPolitics, Republicans have made their own behavior an issue, which is the last thing they wanted. So what should Newsom do? Here are a few suggestions, most of them focused on the pandemic response:

Accelerate and simplify the vaccination rollout. Large vaccination centers such as Dodger Stadium cannot be opened, closed and reopened without warning.

Reopen the economy with easily communicated guidelines, and some measure of common sense. Why ban children's outdoor playgrounds but permit shoppers at Best Buy?

Reopen the schools. Ideally, a Democratic governor must avoid confronting the all-powerful teacher unions, but he cannot back down if the teachers remain recalcitrant. Reopen for students and parents. The California Teachers Association is airing “Safety First” ads on television. Perhaps, Newsome could point out that the funds for that ad buy could have been dedicated to providing that safety.

Newsom can also go boldly off the pandemic track. Nineteen states and the District of Columbia have legalized sports wagering. Estimates show California would generate $500 million in annual new revenue when fully operational. The last wagering bill died in Sacramento due to a lack of consensus from competing interests, including Native American tribes, racetracks, card clubs. Newsom would be a hero by brokering a deal. The issue cuts across party and generational lines.

What Newsom cannot do is capitulate to ultra-progressive state legislators who are pounding him to prioritize COVID-19 vaccines for those in immigration detention centers. Explain to a parent: “Your children's school is closed, businesses are suffering, houses of worship have reduced capacities, and sorry, you are not vaccinated, but noncitizens entering our country illegally should receive priority.” That’s a tough sell.

The hot rhetoric is already flying. Democrats are referring to any Republican candidate as “extreme right-wing” or a “Trump loyalist,” and recall supporters are “backed by unknown, secretive big-money groups.” Recall is a godsend for some of these Democrats as it’s far easier to blame Donald Trump than tackle homelessness.

Timing is everything. If sufficient signatures are certified post-March 17, expect an October election. Advantage Newsom. If the election were held now, Newsom would be in substantial jeopardy. The current zeitgeist of California is best described as road rage 24/7. Tempers may cool over time, especially if the pandemic subsides. If Newsom is fortunate and skilled, by next autumn schools will have reopened, everyone who wants a vaccine will have received one, businesses will be open, even if at reduced capacity. Newsom will proclaim “victory” amid  diminished public ire.

This is not breaking news, but California is a one-party state. Democratic voter registration is 43%, while Republicans and “decline to state” voters jockey for a distant second place — usually in the mid-20s. Democrats hold all seven statewide offices, with supermajority control of both houses of the state Legislature. The critical question, then is this: Are the Democrats who possess the requisite name recognition all-in on Newsom? Or could the ambitions of one well-funded Democratic candidate override unity? It has happened before.

In 2003, Democratic Lt. Gov. Cruz Bustamante, after first vowing not to challenge Gray Davis, got cute late in the game. He urged voters to vote “no” on the first part of the recall ballot to support Davis but then offered his name on the second part of the vote. The Bustamante rationale was “just in case” the recall succeeds, Democrats need a fallback. It backfired.

Bustamante received 31%, which might have been enough in a crowded field – except that a popular action-movie hero with centrist political views was on the ballot. Arnold's Schwarzenegger garnered nearly 48% and became the Golden State’s 38th chief executive. As for Bustamante, he was defeated in his next election and never held public office again.

Despite that sobering example, the lingering question is whether any Democrat will risk a similar fate.  You never know who might take the plunge. In my recently published novel, a fictional Las Vegas-based rock star named Tyler Sloan runs for office as an independent for a Nevada Senate seat. Could a Sloan-like candidate emerge —  a celebrity who could match Schwarzenegger’s appeal?

This celebrity candidate wouldn’t have to come from Hollywood.  What about a super-wealthy entrepreneur who does not care about the repercussions within the Democratic Party because he has no traditional path to political office anyway? The examples that come to mind are billionaires Michael Bloomberg and Tom Steyer, both of whom tried to buy their way to the Democratic presidential nomination last year. Bloomberg is a confirmed New Yorker, but Steyer, although born in Manhattan, put down roots and made his fortune in San Francisco, Gavin Newsom’s hometown.

Last year, Newsom made Steyer a co-chair of a star-studded economic task force to deal with the fallout from the pandemic and accompanying lockdown. But the governor inexplicably dissolved that group three months ago. I wonder how Tom Steyer, a restless sort, plans to spend 2021?