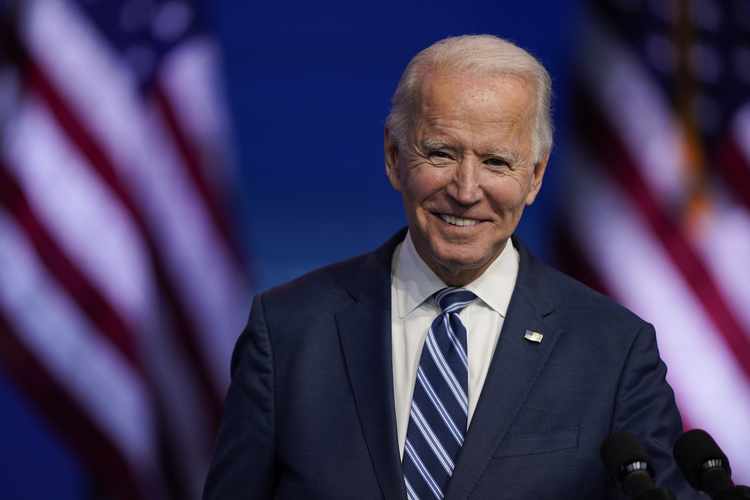 It’s been a week of hysterical superlatives, with terms like “coup” and “banana republic” and “total war” thrown around with alarming frequency as a little more than half the country insists that the presidential election is over and done while a little less than half insists the outcome is still undecided.

Nonetheless, the presumed president-elect laughed during a Tuesday press conference.

Biden was responding to a question about an exchange at the State Department earlier that day. A reporter had asked if officials there were cooperating with the Biden transition team. “There will be a smooth transition to a second Trump administration,” Pompeo deadpanned. Predictably, in an era when irony is a forgotten art, indignation erupted in the all the predictable places. One man, about to turn 78, is old enough to remember this kind of political humor. So Joe Biden is laughing and appearing utterly uninterested in stoking the familiar outrage that dominated the last four years of press coverage. He let others on the left talk about constitutional crises and, if anything, offered unsolicited advice to the president he expects to succeed.

“Well, I just think it’s an embarrassment, quite frankly,” Biden said when discussing how Trump says he won the race. “The only thing that — how can I say this tactfully? — I think it will not help the president’s legacy.” He added, improbably, that “the fact that they are not willing to acknowledge we won at this point is not of much consequence in our planning and what we’re able to do between now and January 20.” Biden said he hopes to speak soon with Senate Majority Leader Mitch McConnell. He would like to have access to classified information, but didn’t sound too worried that it hadn’t yet been made available. He said to expect announcements about his Cabinet by Thanksgiving.

If anything, Biden seemed removed from the drama consuming Trump World and dominating media coverage. At the White House, meanwhile, the order of the day seemed to be projecting an image of business as usual: preparing agency budgets that won’t be needed if Trump leaves office, annoying Democrats and journalists in the process.

Senate Minority Leader Chuck Schumer was publicly furious, telling reporters that to “the extent to which the Republican Party is legitimizing the president’s assault on our democracy is infuriating and deeply, deeply wrong.” He said his GOP colleagues were giving “air cover” to Trump claims that the election was swayed by fraud. CNN started keeping a list of “GOP Senators Who Haven’t Congratulated Biden.”

Even without cooperation from Trump, let alone Republican niceties, Biden has begun putting his transition plans into place. On Tuesday, a week since Election Day and as Trump lawyers file lawsuits across the country alleging voter fraud and irregularities, he announced a full list of transition advisers. They can begin making their own plans but lack access to government officials, office space or equipment, and the millions of dollars budgeted for the peaceful transition of power.

The General Services Administration official in charge of such things has not signed the requisite paperwork to start that process. “An ascertainment has not yet been made,” Pamela Pennington, a spokeswoman for GSA, said in an email to the Washington Post, “and its administrator will continue to abide by, and fulfill, all requirements under the law.”

Democrats were fuming. Rep. Gerry Connolly, who leads a House oversight panel on federal operations, demanded that the GSA administrator “immediately release funds for the incoming Biden Administration, and cease obstructing the transition.”

Biden certainly knows about squabbles both petty and large. A creature of Washington for nearly five decades, he understands partisan sniping. But he has been out of office during the Trump era. He was not a party to the outrage cycle driving social media and animating the left. This was deliberate. As Ed O’Keefe of CBS News reported, a crucial part of Biden’s campaign strategy early on was avoiding drama that didn’t animate their voters: “They said, ‘It's very simple. We turned off Twitter. We stayed away from it. We knew that the country was in a different headspace than social media would suggest.’”

This strategy included promising to work with Republicans. Biden regularly advertised his bipartisanship and comparative centrism during the primary, a moment when the Democratic Party seemed to be following the leftist star of devoted “democratic socialists” such as Rep. Alexandria Ocasio-Cortez. At one point, the former vice president even offered a mock confession for having been willing to say nice things about a Republican congressman facing a tough reelection. “OK,” he said with obvious contempt for such criticism, “well, bless me, Father, for I have sinned.”

Biden also returned to his regular theme of national reconciliation Tuesday, again offering solicitude for those who voted for the GOP ticket. “I understand the sense of loss,” he said. “I get that. But I think the majority of the people who voted for the president, I think they understand that we have to come together.” He added, “I think they’re ready to unite. And I believe we can pull the country out of this bitter politics that we’ve seen for the last the last five, six, seven years.”

Those overtures are largely rhetoric, of course, and the possibility of divided government still looms. A reminder came late Tuesday in the form of confirmation that North Carolina Sen. Thom Tillis has held on to his seat, increasing the likelihood that Republicans maintain control of the upper chamber. As president, Biden will either have to work with them or go to war with them. He made it clear, again, which course he prefers. But if they won’t even acknowledge his victory, asked a reporter apparently concerned about the misbehaving opposition, how can he expect to work with them? “They will,” Biden answered with a smile. “They will.”